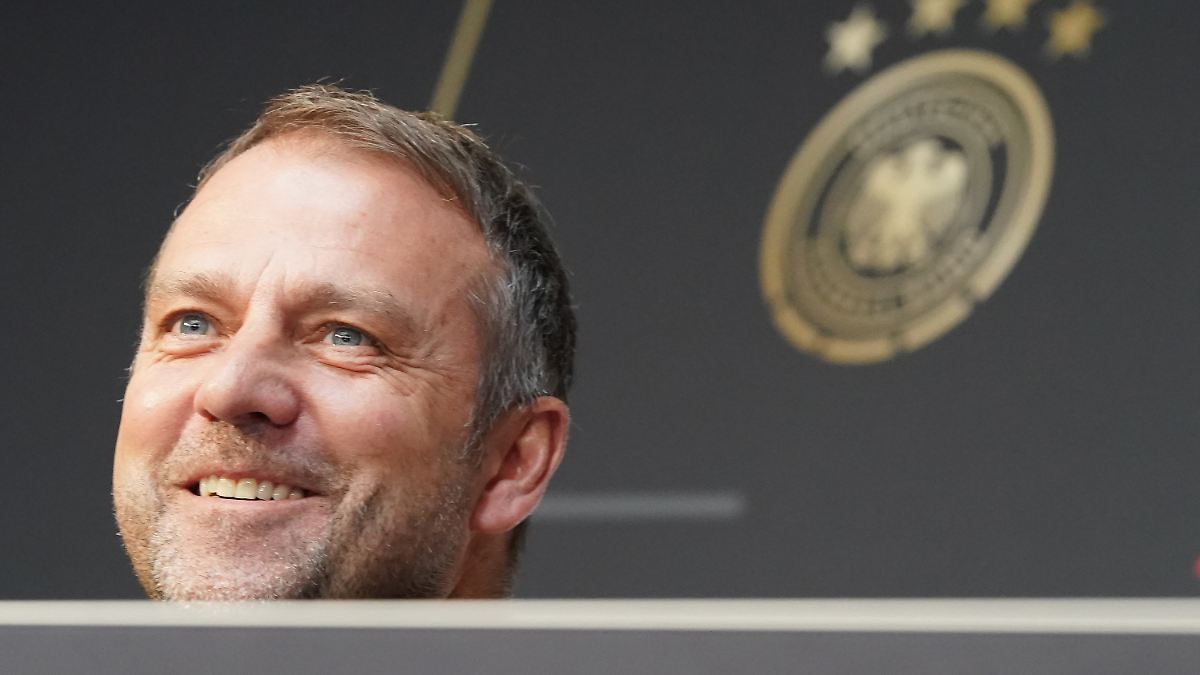 The people in Germany have apparently found fun in the national team again. The game against Romania on Friday evening is sold out (under corona restrictions). The man who gives people back joy is called Hansi Flick. And he’s in a good mood.

Hansi Flick will not fucking get rid of Hasan Salihamidžić. Hansi Flick and this Hasan Salihamidžić, you will remember with horror, were the big rivals at Bayern. Actually, they should have worked together. And must. But that didn’t work out at all. Because it was about sovereignty in the squad planning of the record champions. The one (Flick) really wanted more influence. The other (Salihamidžić) did not want to give up any of this. This dissent led to the separation and the coach to the German Football Association in the summer. There he is now the federal flick.

Of course, in this role he has a lot to do with FC Bayern. They are the best team in the country. And there are many footballers who are important to Germany playing there. But just because Flick is still in contact with FC Bayern, it doesn’t necessarily have to be about the sports director. But at last he had wondered. And that through the trainer. Even if he didn’t speak to him directly. The man from Munich found it strange that the ailing Dortmund Marco Reus was allowed to leave the national team prematurely. Salihamidžić did not always imagine such privileges for players of the record champions. His teasing did not go down well. The Borussia barked, he should “shut up”. What Flick thought of the subtle attack was not clear – until now.

Because now that he came to the media round for the first time in his second course for the national team, he said something about it. Not of his own free will. He had been asked. “We have a team doctor who is also Bayern Munich’s team doctor,” recalled Flick. “If he says it can’t, I think it’s legitimate to send the player home.” It was similar with Thomas Müller. He might have played in the last game in September, said Flick, “but it wasn’t safe there either. So we sent him back to Munich.”

Now this moment was the only one that caused dark clouds to rise over Hamburg. These were quickly followed up again when it came to the Flick core area. The DFB team. The Bammentaler pulled that out of Löw’s lethargy surprisingly quickly. He had already proven this remarkable quality during the record championship. There he not only transformed the insecure ensemble into a monster of success, but also gave players such as Jérôme Boateng and Thomas Müller a sense of career again. He had made them performers. This role could fall to them again for Germany. Müller is already there, but Boateng is not yet. But at least he knows that the way back is not completely overgrown.

However, the situation is different. Müller will find his place. It will be a prominent one. Despite a Kai Havertz and the powerful Florian Wirtz pushing forward. The man with his indefinable way of playing football and as the head of the subject areas of communication and guidance is too important. What Terrence Hill was to Bud Spencer, Müller is to Flick. Boateng no longer has this status. That is also due to Antonio Rüdiger and Niklas Süle. The two center-backs have made remarkable progress and are currently the best the country has to offer. Important addition: Not only is it the best, it’s damn good too. And now set. The national coach revealed that. This is something special. Because he doesn’t like to say things like that.

Where problems were previously discussed, solutions are now presented. “We have two people in every position. We are spoiled for choice. We have an enormous quality in the squad,” says Flick happily. Thilo Kehrer and the polyvalent Jonas Hofmann also offer the positions of the full-backs. But David Raum is also pushing for his chance. The only thing with the striker that is not so easy to explain away. Because it is not yet at the top level. Karim Adeyemi from RB Salzburg could be the man of choice. But it is not yet. For Timo Werner, however, this could apply. The coach trusts the striker, who does not have an easy time at Chelsea. Yes, in Germany things are getting concrete again, it’s no longer about upheaval and such.

Solid evidence: the World Cup qualifier against Romania on Friday evening (8.45 p.m. on RTL and in the live ticker on ntv.de) in Hamburg is sold out. That was not always so. However, because of Corona, only 25,000 spectators are allowed into the stadium. That makes things easier. What to expect against this opponent? Well, a win, of course. And a good performance. In the team, the coach feels this irrepressible urge to do better than in previous years. He even had to stop training on Wednesday because the intensity was too high. They were all so hot. Maybe someone reminded them of the embarrassing 1: 5. That happened 17 years ago. However, only one of the protagonists on Friday was involved. The Romanian coach Mirel Radoi. He orchestrated the game from midfield. Correspondingly, he is boldly approaching his goals: “We’re going to Germany to get one, if not three points.”

Not so long ago that would probably have been an announcement that one would have believed. But times have changed in a flash. The way the German team played last time, Romania doesn’t seem like a nation that can do evil. The really big times are over anyway. Although Ianis is still a Hagi on the offensive. However, he is nowhere near as international a star as his father Gheorge was once upon a time. The fact that in Germany there is no need to worry about embarrassment, or at least one inconvenience, is due to the high pressure area “Hansi”.

The DFB has to blame itself for the fact that all sorts of weather metaphors are being drawn. Although they probably won’t do that at all, they’re glad that the “dark clouds” once sung about by DFB director Oliver Bierhoff have finally cleared. “You have the feeling,” said Bierhoff, “that the (clouds) have now disappeared.” And if the word optimism weren’t so absolutely terrible, then it would now actually be there. You can feel a “positive spirit” and an “uncanny joy”. This is “a great achievement for Hansi and his team, who convey this euphoria,” reports the DFB director. And the goal is already clearly stated. “We want to get back to the top of the world, so every game counts.” And the trainer. He only (still) knows a low pressure area. It’s called “Hasan”.