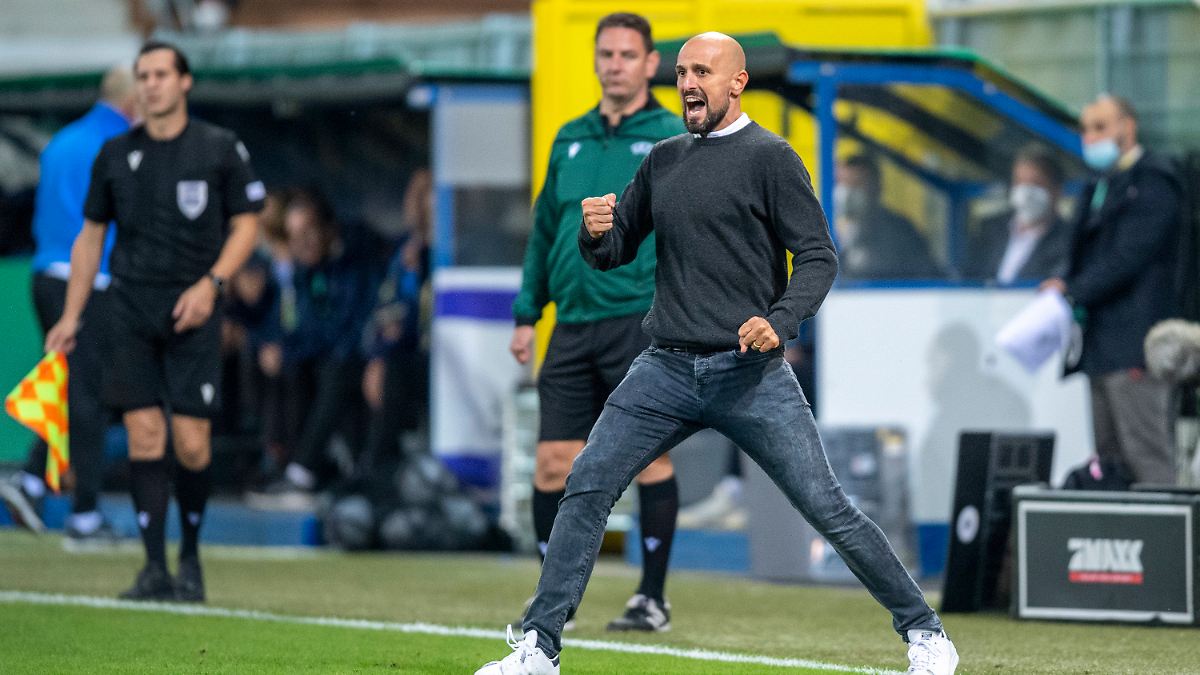 It already looks like the successful streak of the U21 European champions will tear at the premiere of the new coach Antonio Di Salvo, when his team turns the game against Israel after all. Two late goals ensure a happy ending – and a good starting position.

Antonio Di Salvo took a deep breath after his emotional and turbulent debut as U21 head coach and then gathered his team around him on the lawn. In a dramatic final phase, the German U21 footballers saved their coach after being twice behind the premiere success. Thanks to the late hits from Kevin Schade (89th minute) and Jonathan Burkardt (90th + 1), the DFB youngsters beat Israel 3: 2 (1: 1) in Paderborn. The German team thus defended their first place in the qualification group in front of the Israelis. Only the first in the group can buy the EM ticket 2023 directly, the next German opponent is Hungary on Tuesday (5.30 p.m. / ProsiebenMaxx).

“I pushed the guys forward. They were great goals. You have to put the opponent under stress. That often goes over crosses. We had three buzzwords: show heart, team spirit and fun. I am happy when I see: We score the 3-2 and everyone is having fun, “said Di Salvo after the success and added:” As an assistant coach I would have been just as happy, but the tension is different. “

Yannik Keitel was also very satisfied: “We always stuck with it and showed our hearts. We wanted to make Toni’s first game as successful as possible. We achieved that and are accordingly happy.”

Debut in the hometown

The reigning European champion, who is now unbeaten in 13 games, was the superior team at the debut of the previous assistant Di Salvo in front of 3262 spectators in his native Paderborn, but struggled against Israel and conceded two simple goals. The DFB youth turned up late and the game. Doron Leidner gave the guests the lead (28th minute), U21 debutant Malik Tillman from FC Bayern was able to equalize (34th). After the Israelis’ second goal by Omri Gandelman (51st), the DFB youth struck back in their first home game in front of fans in almost two years, but in the closing stages.

The previous U21 coach Stefan Kuntz, who has taken over the office of Turkish national coach, wished his former team good luck in a video message before kick-off. And the DFB Juniors dominated the game even without the injured exceptional talent Youssoufa Moukoko. Above all, the two newcomers Tillman and Schade caused an offensive stir. Freiburg’s Schade hit the post with his header after a free kick (11th). The Israelis, who also started with two wins from two games, were particularly dangerous when it came to counter-chances and in the fast switching game.

Israel twice as cold as ice

Di Salvo had summoned a total of three debutants. The fact that the eleven, which had changed in numerous positions, was partly missing the vote, was particularly evident on the offensive. But that did not change the German superiority. After a nice combination, Angelo Stiller was free, but lifted the ball over the goal (26th).

And this negligence took revenge. After a dream pass from midfield of the Israelis, Leidner was free and scored to make it 0-1. But the German team was not deterred and was rewarded. After a nice interaction with striker Erik Shuranov, Tillman scored the deserved 1-1 with his U21 premier goal. Di Salvo clenched his fist on the sidelines and continued to cheer on his team.

But shortly after the break, the next setback followed: The guests took advantage of Gandelman’s second chance to score a second goal. The hosts looked shocked and found it difficult to come up with another answer. But the German selection fought their way back into the game and had a chance to equalize. Tillman only hit the crossbar from close range (70th). The German team pressed more and more and came through Schade to equalize before Burkardt even ensured the victory.