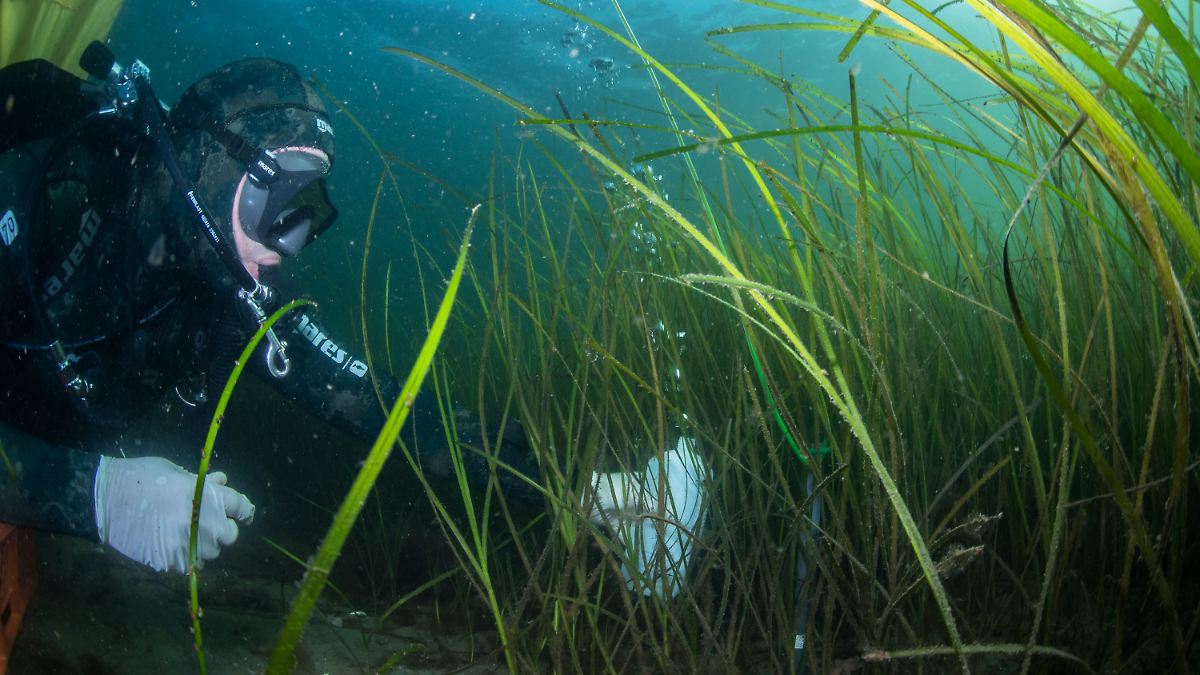 Thorsten Reusch is an underwater gardener. So to speak. In two German Baltic Sea regions, the Head of Marine Ecology presses on Helmholtz Center for Ocean Research in Kiel (GEOMAR) hands his divers bundles of seaweed and sends them into the water with a clear order: Please plant once in the seabed. Why? Seagrass beds can store an incredible amount of carbon. Much more so than tropical rainforests. So is the marine ecologist “on fire” for that Project called “Sea Store”? Not only, as he reveals in the ntv podcast “Climate Laboratory”. Seaweed is an all-rounder: it promotes biodiversity, protects the coast and is good for bathing water quality – a win-win-win situation for everyone involved. Or? Unfortunately no, there is still a lack of acceptance among the bathing population. Small crabs are to blame.

ntv.de: You head the marine ecology department at the Helmholtz Center for Ocean Research in Kiel (GEOMAR). To put it bluntly, you can also say that you are a senior gardener. Please tell us how you plant seaweed underwater.

Thorsten Reusch: Yes, well said. We haven’t been “gardening” that long, we’ve been doing that since this year. The idea is to try to restore important habitats underwater as well. This is done on land with moors or on a small scale with a toad pool so that the endangered amphibians have more habitat again. And we started with seaweed in the German Baltic Sea, and it actually looks a bit like gardening: The divers get hold of bundles of seaweed plants. They swim with them and plant the areas marked for them.

And do you look after them like good gardeners do? Check regularly whether the plants are growing and thriving? How does that go?

There are some important differences from gardening. We don’t weed, we don’t spray herbicides or things like that, which unfortunately some hobby gardeners do.

The seaweed probably doesn’t have to be watered either?

No, that also falls out. But we’re actually tracking it over time and – that’s the good news – we ended the season last week and found that densities have quintupled since we started at the end of May. That exceeded our best expectations. We are full of hope that our plantings will have reached the density of a natural seagrass meadow by the end of next season, i.e. after only two years.

You mention it: They are plants that existed naturally before and are now being planted again. Why are these seagrass meadows no longer there?

Many volunteers who want to support the project get in touch with Thorsten Reusch.

Seagrass meadows in the habitats of coastal seas around the world are very much endangered because the water quality has deteriorated much. Water quality for the plants means that, surprisingly or paradoxically, there are too many nutrients in the water: The water becomes cloudy because too much plankton is growing. Cloudy water, however, is something that these very light-loving seaweeds, which are rooted in the bottom, cannot tolerate. As a result, their population has declined sharply. We only have estimates, not hard data, but around 60 to 75 percent.

Where do the nutrients come from that cloud the water?

The nutrients come mainly from intensive agriculture, even if the inflows have already been restricted. There has been an improvement. We can also see that in the seagrass meadows of the Baltic Sea, which spread out again very easily. Good news. With this resettlement, we want to accelerate the natural resettlement, because it takes a very long time – sometimes decades. Even on surfaces that are suitable for this. We want to help.

But doesn’t it always mean that the water quality in Germany and throughout Europe is very good?

What really helps against climate change? Klima-Labor is the ntv podcast in which Clara pepper and Christian Herrmann Examine ideas that sound great, but which are not always very clear about how useful they really are. Should we feed cows with seaweed? Equip cargo giants with large sails? Green hedge funds appointed to supervisory boards?

The ntv climate laboratory: Listen to it every Thursday – half an hour that informs and is fun. On ntv.de, in the ntv app and wherever there are podcasts: Audio Now, Apple Podcasts, Amazon Music, Google Podcasts, Spotify, Rss feed

That is the bathing water quality, completely different parameters are measured there. Basically just bacteria. You have to be able to look further than a meter, then the general cloudiness fits. That is not particularly far: if you cannot see your big toes in the water, the water quality is good according to this EU bathing area directive. But that has nothing to do with the ecological water quality. That is not satisfactory. As a result, the vast majority of our coastal seas are not in a condition that would actually be required by the EU Water Framework and Marine Protection Directive.

What function does the seaweed fulfill in this context? Why do you want to bring this back again?

Over the past ten years it has been found that the carbon storage function of the meadows has long been underestimated. Enormous amounts can be stored in the sediment. On the one hand through the root mass of the seagrass meadows themselves, which are repeatedly layered on top of each other to form mats, some of which are meter-thick. But sediment particles are also combed out of the water by the canopy of the seagrass. The water calms down between the stalks, the particles sink down and this organic carbon is deposited. This is called blue carbon.

Can you compare that to a rainforest?

We have found in the German coastal waters of the Baltic Sea that seagrass meadows can store between 10 and 30 kilograms of carbon per square meter. The open question is: how quickly did that accumulate? We don’t have any data on this yet. Other regions of the world show that, surprisingly, it can be up to 30 times more than in the forest – although the trees in the tropical rainforest are huge, but that’s just an open cycle. Nothing is accumulated in the ground, everything is returned. In the seagrass meadow, a layer forms that becomes thicker and thicker – like in a raised bog. That remains and is taken out of the cycle for decades to centuries. That is the main difference.

Will this help us to achieve our self-imposed climate goals? Can we buy time with it?

An underwater meadow is being created here.

Seaweed will not save Germany’s carbon balance. But of course it’s a good idea to do that because a lot of small measures have to come together. In the Baltic Sea area there are around 3000 square kilometers where seaweed could grow. If we renature it, it is possible to achieve measurable success. But that would be a crazy task, we just started with 0.001 square kilometers.

Nevertheless, one has to ask the question of cost-benefit. You said it: It is extremely complex and expensive because these plants all have to be planted individually.

Seaweed often still has an acceptance problem, because on the beach …

Admittedly, it’s very expensive right now. We have not yet done a full cost calculation, but my guess is that we need around 100,000 euros for one hectare. But we have got an incredible response from amateur divers who are desperate to help. We already have a list of 45 divers who would like to help with no great advertising. This voluntary work could reduce costs. Of course we also try to improve the technology.

How does it currently look?

It’s very clumsy. You actually have these offshoots, they are cuttings or saplings – that’s what you would call it in gardening. The divers get hold of the ones on the boat in bundles of 50, then they are put into the sediment by hand.

How many of the seedlings survive? Some hobby gardeners have a green thumb, others don’t.

We only have the dates of the first plantings made by professional divers. But the number of sprouts has increased fivefold or even eightfold within four months. Very few died there, otherwise we wouldn’t have this high increase in meadow density. We think that by the end of next year, after only two growing seasons, we will be able to achieve the density of a natural meadow. That’s great. We had actually expected a longer time.

In the Project description it means that in addition to the costs, the acceptance must also be checked. Why?

The seaweed grows directly on the coast, in protected locations to the surface. That bothers a lot of people, for example when surfing. There are also semi-serious reports every year that the seaweed is a creeper and dangerous. Small crabs also live in there. Sometimes they actually swim up and cling to the bathers. That tweaks a bit, then a crisis is always announced immediately: Oh God, what is that? Can that sting? And so forth.

That doesn’t sound very pleasant, but conversely, would it also mean that the water is very clean when there is seaweed and these little crabs?

Absolutely. At GEOMAR we even found that seagrass meadows had a negative effect Vibrios have in the water. In a brand new release we show that there are fewer Vibrio bacteria in the water near the seagrass meadows. Also from the carnivorous group, the vibrio vulnificus is called. Of these, several bathers actually get a serious infection every year. To cut a long story short: swimming over seagrass meadows is great. One can assume that the bathing water quality is better than where there is no seagrass meadow.

The description also mentions that there have been many failures. What has gone wrong so far?

There were of course failures. The Dutch have been trying to establish seaweed in the Wadden Sea for 20 years. They used to have very thick meadows. Colleagues from Denmark and Sweden, who started similar experiments almost ten years ago, also had numerous failures, which we can of course minimize now because we are looking: How did they do it? They actually had their greatest successes with this very clumsy and seemingly archaic method of planting whole plants by hand. It didn’t work for them with seeds, but we have a few ideas on how we can improve the method so that we can get ahead with seeds and, as a result, make it easier to scale the whole thing to several hectares.

The whole thing should be evaluated in two years. Isn’t that a little late for such experiments? We know the cause of our misery: We emit too much CO2.

If you only look at the CO2 minimization aspect, you could of course think so. But as a marine ecologist, I also have to keep marine ecology in mind. You can kill many positive birds with one stone. For example, one can raise awareness of coastal habitats. Without these so-called co-benefits for biodiversity, coastal protection and bathing water quality, I probably wouldn’t be on fire for this project either. With these effects, however, it is a win-win-win situation.