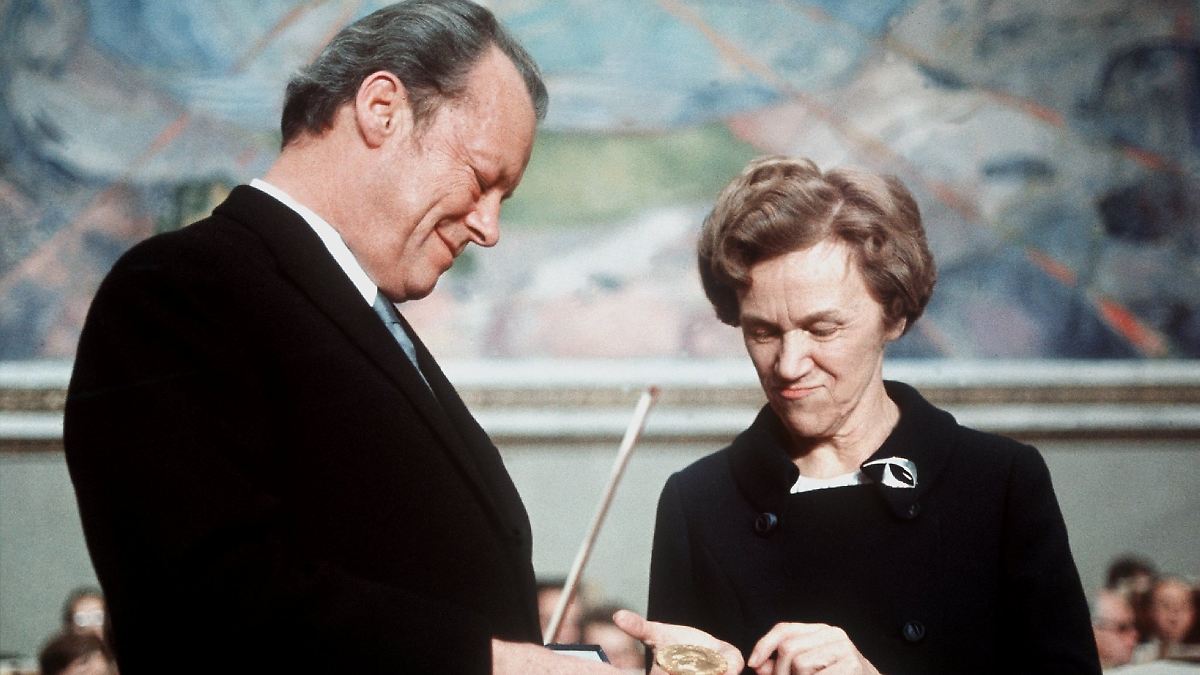 In 1971 the then Federal Chancellor Willy Brandt received the Nobel Peace Prize – since then no German has been given the honor. Half a century later, Angela Merkel is also considered a possible winner. But others are favorites.

In the huge library of the Norwegian Nobel Institute in Oslo there are around 200,000 books – but the most interesting documents are stored deep in the basement. Behind a steel door that is as heavy as it is heavily secured are the nominations for the Nobel Peace Prize, which have traditionally been kept under lock and key for half a century. It has been 50 years since ex-Federal Chancellor Willy Brandt was the last German to receive the most prestigious peace award in the world – so it is now possible for the first time to see who nominated him and who his opponents were.

For the director of the Nobel Institute, Olav Njølstad, going to the cellar is particularly exciting this year, because Norway has a special relationship with the social democrat Brandt (1913-1992). “For the Norwegians, Willy Brandt’s name is very much associated with the fight against National Socialism,” says Njølstad. After Adolf Hitler came to power, Brandt, whose real name was Herbert Ernst Karl Frahm, fled to Norway in 1933. He learned the language, made many friendships and worked under the code name Willy Brandt against the Nazi regime. When the war hit Norway, he fled to Sweden and continued to work as a journalist.

After the war, Brandt returned to Germany and became mayor of Berlin, SPD chairman and foreign minister. He was Chancellor from 1969 to 1974. He received the Nobel Peace Prize in 1971 for his Ostpolitik, which contributed to the détente in the Cold War. The letters that were sent to the Nobel Committee with candidate proposals are kept in thick binders. You now show: Brandt was not nominated by anyone from Germany or Norway at the time.

Contribution to the détente in the Cold War

“There are three nomination letters,” says Njølstad. “One is signed by two French, an Italian and the President of the National Assembly in Senegal.” A second letter comes from a US history professor, the third from Jens Otto Krag, Social Democrat and many years Danish head of government. All highlighted Brandt’s contribution to the détente between East and West. The image of his kneeling in Warsaw is legendary to this day.

In an old notebook it is written in handwriting who else was nominated in 1971. A total of 39 names are listed, including Jean Monnet, who is one of the founding fathers of the European Community, and the Jewish humanist Elie Wiesel. Many candidates from 1971 later received the Nobel Peace Prize. Njølstad considers the 50 years of secrecy surrounding the nomination process to be extremely important. “You have a responsibility when you highlight individuals and put them in the position that the peace prize gives them,” he says. “You have to feel pretty sure that this person has the strength to take this pressure, the attention they’re getting.”

No German has received the Nobel Peace Prize since Willy Brandt. Is it therefore about time again – for example with a prize for Angela Merkel at the end of her 16-year chancellorship? 234 personalities and 95 organizations have been nominated this time. This year’s winner will be announced on Friday. The outgoing Chancellor is not one of the top favorites – but as is the case with the Nobel Prizes, nobody can say with certainty in advance who will receive the award in the end.

In 2020 it went to the United Nations World Food Program – the UN organization had hardly had anyone on the screen beforehand. While the betting offices again favor the World Health Organization (WHO) in view of the pandemic, as in the previous year, the Belarusian opposition leader Svetlana Tichanovskaya, the Russian Kremlin critic Alexei Navalny and Reporters Without Borders are also mentioned in many places.

“A Bad Year for Peace”

The Stockholm peace research institute Sipri believes that a prize for the fight against the climate crisis is most appropriate – the last such award was given in 2007 for the IPCC and the former US Vice President and climate educator Al Gore. Sipri Director Dan Smith says that the year was once again exceptional with its severe forest fires and floods, and that COP26 in Glasgow is one of the most important global climate conferences. The topic is therefore extremely topical, and there does not seem to be any other clear, strong candidates. “This year has been a bad year for peace,” says Smith, referring to the situation in Afghanistan and Ethiopia, for example. There was no new breakthrough for peace treaties or an end to armed conflict.

So will there be a Nobel Prize for climate activist Greta Thunberg? Smith warns that choosing a single person can be problematic. “Greta Thunberg is an outstanding young activist. But there are of course many other young activists, and she herself points out that one should also think of the others,” says the peace researcher. So he has an idea: “It would be really great to see a list of 10 to 20 named young climate activists from all over the world.” One would underline that it is a social movement. It would be particularly important to consider activists from countries where environmentalists are being harassed. Such a choice would be a very desirable one, says Smith.