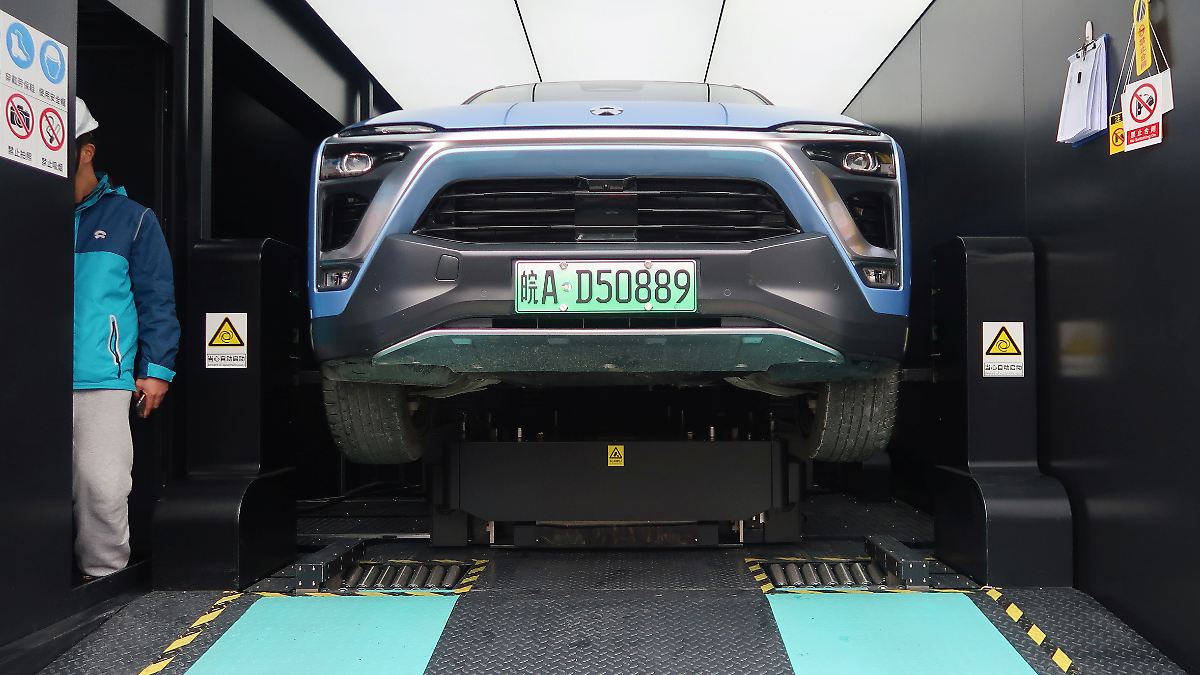 In the west, the interchangeable battery system for e-cars was stillborn. For Beijing, however, it is the new technology of choice. Models with “batteries to go” including the infrastructure for changing batteries could be the perfect voltage to change the market in your own favor.

It’s actually old wine in new bottles, but the tour in Beijing seems to like it: For a year now, the Chinese government has officially been encouraging domestic carmakers to build electric cars whose batteries can be swapped quickly and easily in a small exchange station . This is not only having an effect on the Chinese car market; foreign industry observers are also following this development with interest. Empty battery out, full battery in – the fully automatic battery change takes no longer than a refueling process. The unpleasant range problem and long loading times are solved in a snap in the underbody. That sounds promising at first.

Battery replacement at a Better Place Yokohama presentation in 2009.

However, the idea of ​​replacing batteries is not new. Shai Agassi, a programmer from Tel Aviv, was hailed as a prophet in the western world for precisely this idea in the early 2000s. In Germany he made headlines as Crown Prince at SAP. When his career stalled, he left the software company to devote himself to his company Better Place and his “calling”. His goal: to cover the world with electric cars within 15 years – a suitable infrastructure of electricity and battery change stations should help. For him, however, this dream should not come true.

His company – at that time one of the best financed startups in the world – went bankrupt in 2014 and was wound up. In the year of insolvency, Better Place sold just 8,500 fully electric cars. Of the 75 million cars sold per year worldwide at the time, only 12,156 were all-electric cars. Compared to today, a homeopathic amount: in 2020 around 194,200 cars with purely electric drives were newly registered in Germany alone. Agassi was obviously ahead of his time.

Shai Agassi failed with his idea, but his vision lives on.

The exchange system seemed buried. European manufacturers currently do not offer models with exchangeable batteries. The technology did not work in South Korea or Japan either. Instead, outside of China, people preferred to tinker with the ideal electric car and the perfect high-performance battery that goes with it. China has taken a different path: The battery change was declared a top priority and promoted. The question that observers is asking is: Could this land a belated technological coup that is causing trouble for automakers outside of China?

Dudenhöffer: “China is the kingmaker”

Then as now, there are a number of justified objections to exchangeable batteries. Starting with the high costs, because more batteries have to be kept than there are e-cars. Right up to the fact that battery technology has developed rapidly, which has also solved the range problem to a certain extent. Nevertheless, according to the auto expert Ferdinand Dudenhöffer, China has the potential to fundamentally change the auto industry.

“Under normal market laws, battery changing stations have no chance of a breakthrough,” says Dudenhöffer ntv.de. But because of its size and market power – over 20 million cars were sold in China last year alone – one should not underestimate China’s potential. “With its huge domestic market, China is becoming a kingmaker. If a country can implement a technology change, it is China. The world’s largest car market defines the standard!”, Says Dudenhöffer.

But not much of that can be seen yet. So far there are 716 such exchange stations in China. But the leadership in Beijing is doing a lot to change that. In May 2020 she included the model in her “New Infrastructure Plan”. Expensive electric cars that cost more than the equivalent of $ 42,000 are excluded from the state rewards program. Large groups such as FAW, BAIC, Geely or SAIC have been building models with an interchangeable system since then. The advantage: the car is cheaper for customers without a battery. Because it reduces costs, e-mobility is becoming more attractive on the market. For the customers, however, there are still fees for the replacement batteries. A battery subscription costs around $ 150 a month.

Is the West oversleeping a new standard?

“China is setting a new infrastructure standard for e-mobility at high speed. Neither in Europe nor in the USA can we observe similar projects,” says Dudenhöffer. “As with lithium-ion batteries, it will be a long time before the EU Commission or the German government notices that we are chasing after them.”

The Chinese startup Nio is already planning beyond national borders. 1000 exchange stations are to be built outside of China by 2025, with the first station in Oslo going into operation at the end of 2021. The Chinese mineral oil company Sinopec is working on an even bigger coup together with the Chinese battery exchange station operator Aulton. Aulton is said to operate exchange stations at 30,000 Sinopec petrol stations. According to the company, fully automatic battery changes are possible in less than a minute.

Gregor Sebastian, auto expert at the Mercator Institute for China Studies (Merics) does not believe that the Chinese government will actually succeed in climbing the technology throne in e-mobility with this clever volte. Even if it is clear that Beijing is willing to experiment in order to strengthen its own carmakers, it is still a niche technology.

Electromobility has a special feature: nowhere in the world is there a market-based e-car market, instead subsidies everywhere. Essentially, the replacement battery model therefore stands or falls with state funding, says Sebastian ntv.de. “China is the first market to have introduced generous subsidies, but also the first to get out of the market that wants to move away from a state-supported and controlled e-car market.” However, there is still no specific timetable for this.

Beijing has technology on its radar. But “there is no major strategy that would promise car manufacturers in China long-term security,” says Sebastian. “A strategy paper that goes until 2035 gives only a certain planning horizon. It is completely unclear whether there will be subsidies that go beyond the year 2022.” For the domestic carmaker, the uncertainty is great. In addition to the question of state funding programs, the question of standardization in order to roll out the system on a large scale is completely open. A coup is only possible if there are standard batteries and exchange stations that can be accessed by all models.

On the other hand, the Merics expert has no doubts about what Beijing has in mind: The management does not like “that 55 to 60 percent of the market is still covered by foreign manufacturers”. The own auto industry should be strengthened. For this reason, the government is relying on technologies “in which it does not chase after the foreign car manufacturers, but is ahead of the curve”. China doesn’t just want to sell more cars, it wants to change the structure of the market. “Subsidies and standardization will decide whether or not you will succeed in this coup.”

The fact that Chinese carmakers are skeptical of the announcements from Beijing is shown by the latest plans and statements by China’s second-largest carmaker Geely and the Chinese tech giant Baidu: Geely has launched the Maple Leaf 80V, the first model with a battery swap platform. Otherwise, the car manufacturer explicitly spoke out against the system in the summer.

The Geely battery should remain integrated in the chassis. This means that the vehicles still need to be connected to charge the battery. The Jidu Auto joint venture, which was only founded in March with Baidu and which is expected to present the first model next year, also relies on the Geely SEA platform with an integrated battery. Geely chief engineer Kent Bovellan said in June. “If we don’t have standards, everyone has to build their own stations and have their own batteries in each station … this is going to be a mess,” he added. Evidently there is still a need to persuade China.