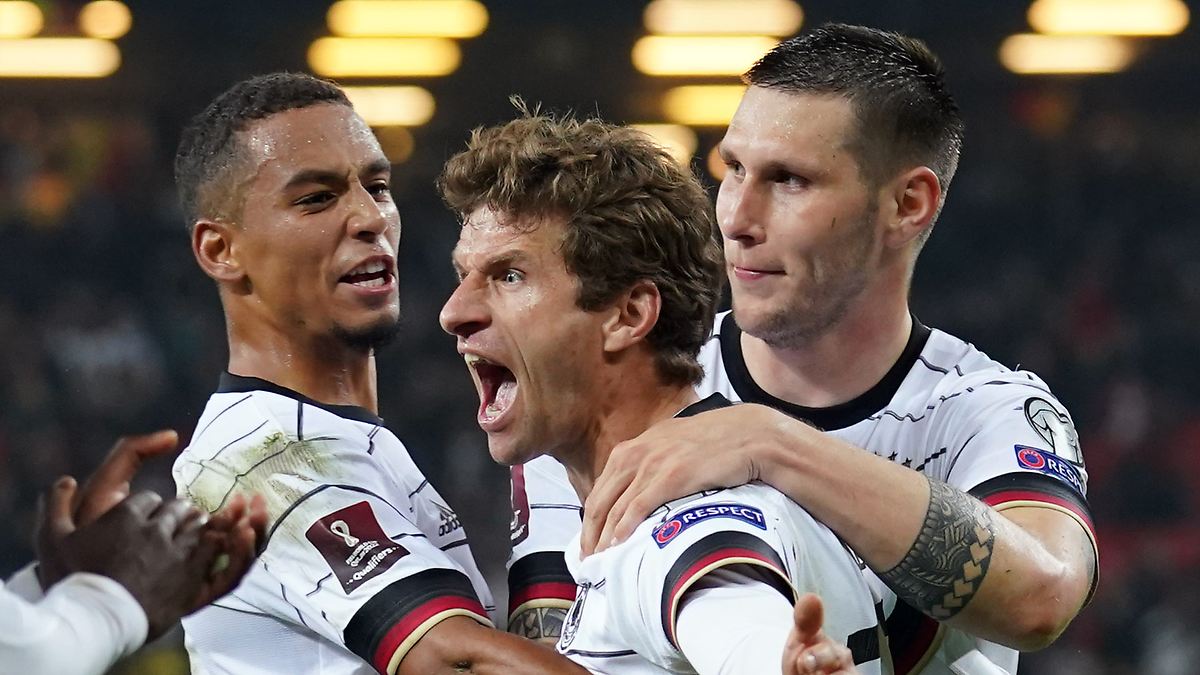 The assault of the German national soccer team on the Romanian goal is constant, but the redeeming winning goal falls late. The team of national coach Hansi Flick prevailed in the World Cup qualification. His winning streak continues.

As a super joker, Thomas Müller gave the young German national team a victory of will. After his substitution in the 2-1 (0-1) against Romania, the Bayern leader rewarded the never-ending attacking efforts of the selection of the national coach Hansi Flick, who was also victorious in the fourth game. In Hamburg’s Volksparkstadion, the DFB kickers struggled for one half despite great morale – but never fell into the well-known lethargy to the delight of the 25,000 spectators. This means that the 2022 World Cup in Qatar is very close.

Serge Gnabry (52nd) with his 20th international goal and Müller (81st) with his 40th DFB goal turned the party after the early goal of the young Ianis Hagi (9th), who made the DFB defense much to the displeasure of the national coach fooled. The first goal of his tenure is likely to want Flick to discuss extensively with his highly committed, but often erratic players who are negligent in exploiting opportunities.

Flick still has work to do

With now 18 points, the DFB selection travels to Skopje as the sovereign leaders of qualification group J, where the revenge against North Macedonia awaits on Monday. Ideally, Germany can buy a World Cup ticket there. The first leg defeat under Flick’s predecessor Joachim Löw would then only be a blemish.

Flick wants to see attractive and inspiring football. However, there is still a way to go before the German selection has internalized the national coach’s dream. Even if the DFB selection showed commitment, will and passion, the former title collector of FC Bayern got against the world number 42. presented some weaknesses of his team. Inaccurate passing game on the offensive, in addition questionable wobbles on the defensive – and that against an opponent who is not one of the heavyweights of world football. The Romanians presented the German team with more problems than Flick would have liked during some switchovers.

It started off in an atmospheric way. 25,000 spectators in Hamburg, which is not spoiled for football, provided the appropriate framework and could almost have cheered. But the video referee objected – and rightly so. After Andrei Burca touched Timo Werner lightly, the Turkish referee Cüneyt Cakir pointed to the point (5th), but after studying the pictures he had to cash the decision again.

Instead of the early opening goal, there was then directly the mood damper. Hagi, son of the famous Romanian record scorer Gheorghe Hagi, beat Thilo Kehrer and with a leg shot against Antonio Rüdiger and scored from a half-right position for a surprising lead.

Even goalkeeper Marc-André ter Stegen, who represented captain Manuel Neuer, who was injured on the adductors, could not prevent the first goal of the Flick era. Another bitter moment in the DFB jersey for the former Gladbach keeper. In the hierarchy, the eternal Crown Prince cannot ignore Neuer, nor has he been able to really shine in the past. In the only defeat to date in the current World Cup qualification against North Macedonia, Ter Stegen was also unlucky to have been in goal.

It was a thankless task for the keeper. He hardly had any chances to distinguish himself. In addition, the erratic defense with Rüdiger and Niklas Süle in the central defense allowed tricky scenes. A deflected shot by George Puscas could have brought the four-time world champion even more behind (10th).

The will was there, the accuracy was lacking

The effort could not be denied to the German team. But especially in the first 45 minutes, the final pass was missing, so that the outsider was hardly in trouble. Gnabry with a shot while lying down (17th) and a header (24th), plus a full shot from Marco Reus from an acute angle (33rd) – Romania’s keeper Florin Nita didn’t have much more to defuse. No wonder that Flick was visibly tense with his hands in his jacket pocket in the coaching zone.

That didn’t change at the beginning of the second half either. Again there was dire need in a counterattack, with two passports the German defense was undermined. Puscas missed the second goal again (48th).

If the decisive pass doesn’t work, a long-range shot has to be used. Gnabry heeded that and scored from a half-right position to equalize. The hit was also a signal. The pressure of the German team increased, the pressing became more consistent, the chances got better – as with Reus from close range (58th).

Flick wanted the three points and drew his next joker with Thomas Müller and Kai Havertz in the 68th minute. Müller, who found his old strength in Munich under Flick, came into the new era for the first time after his injury in the last international game block – and advanced to the match winner when he was there after a header from Leon Goretzka. Before that, Sané (72nd and 77th) and Havertz (75th) had missed good chances, on the other side Puscas (74th) and Nicolae Stanciu (80th) ensured increased pulse rates.