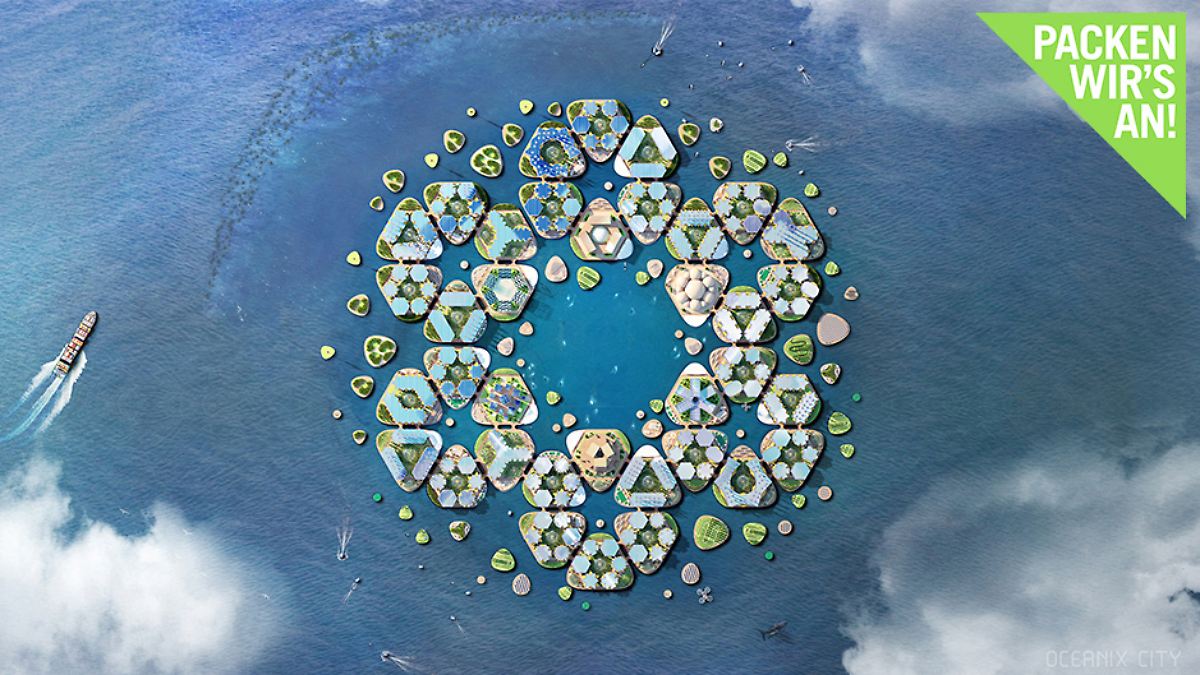 The earth is warming up, the sea level is rising. Island states and megacities near the coast are threatened with flooding. The solution could be floating cities. They should soon become a reality. Proponents of this idea see other benefits as well.

The sea level is rising. Currently by just under four millimeters per year. However, this is almost three times faster than in the past century. Even in the most optimistic scenario of the Intergovernmental Panel on Climate Change, the level will be around 30 to 60 centimeters higher in 2100 than it is today. If things go bad, it is more than a meter – by the year 2300 it threatens to be more than five meters. That depends on how much humans can limit global warming.

For around a billion people who will soon be living in the flat coastal regions of the world, this is not good news. The higher the sea level, the higher the risk of flooding from storm surges, erosion and salinisation of the groundwater. Then where are all these people supposed to relocate? One possible solution: cities that can swim.

Centuries ago, the Uru people in Peru invented artificial floating islands on Lake Titicaca. At the end of the 1950s, the Japanese Kiyonori Kikutake developed the “Marine City” the first modern version of a floating city to meet the limited space on land. The US architect and visionary Buckminster Fuller also saw cheap building land as an advantage in his “Triton” project in the 1960s. “Floating cities don’t pay rent to landlords,” he wrote in his book “Critical Path”. Life on them can be as comfortable as it is cheap. However, the plans were never implemented.

UN: “Could be the solution”

Such constructions are already technically feasible. Cruise ships are nothing more than floating steel islands that can accommodate thousands of people. And since two thirds of the earth is covered with oceans, there would also be plenty of space for floating cities. So the tempting idea is given a fresh boost with the rising sea level. In 2019 the United Nations hosted a round table on the topic. “Sustainable floating cities can offer solutions to the threats posed by climate change in urban areas,” said UN Deputy Secretary-General Amina J. Mohammed at the time.

Life on the water? “Oceanix City” is designed to meet all of the needs of its residents.

The Tahitian entrepreneur Marc Collins Chen was also at the table. He had the plan for a new variant of a floating city with him: Together with the office of the Danish star architect Bjarke Ingels, his company has the floating city “Oceanix City” where people should live, shop, work and spend their free time.

The basic elements of this water city are floating platforms, so-called neighborhoods, on which the complete supply circuit is housed. Wind turbines and photovoltaic systems on the roofs will provide energy, greenhouses and aeroponic farms will provide food, and rain and salt water treatment systems will provide drinking water. However, due to lack of space, the residents have to limit themselves to a predominantly plant-based diet – supplemented by seafood. In this way, the city should be self-sufficient and sustainable at the same time.

Oceanix wants to have the platforms prefabricated on land in order to save construction costs. If necessary, they should be towed to large coastal metropolises. Around 300 people can live in one unit, which can be combined to form larger and larger structures. An archipelago with thousands of segments could be home to more than two million people. It is still unclear whether and when Oceanix will build the first floating city. There are “several governments in talks that are very interested in a prototype in their waters,” Chen told the magazine “enormously”.

Maldives is threatened with land loss

Another project is already on: As early as 2022, the “Floating City” emerge – the first floating city in the world. The situation is no coincidence: The Maldives threaten to sink into the floods for the foreseeable future. 80 percent of the island state is less than a meter above sea level.

The developers of the project are already soliciting customers. The houses, arranged on hexagonal modules, should offer living space from 100 square meters and cost from 250,000 US dollars (216,000 euros) upwards. The aim of the “affordable” prices is to appeal to “the broadest possible spectrum of potential buyers,” says the project’s website. The cooperation with a sovereign state also protects the city from pirates – another challenge for any settlement on the sea.

Another danger is wind and weather. In the “Floating City” it is a ring of sand islands that is supposed to protect the dwellings from high waves. The Japanese company Shimizu wants their floating islands of the project “Green Float” As a precaution, erect only in the predominantly calm waters around the equator, where tropical cyclones are rare. Another reason is the high availability of sunlight near the equator. Because on the circular islands with a diameter of three kilometers, as much food as possible should be obtained in a minimal area.

1000 meter residential tower on the sea

“Green Float” is designed as a floating concrete platform with a thousand meter high residential tower in the middle. According to the plans, its top offers living space for up to 30,000 people. On the lower floors, plant factories produce food for the residents. Several islands, so-called cells, can be combined to form larger modules and ultimately entire floating nations with up to a million inhabitants. However, initially only the smaller version “Green Float II” with a 120 meter high skyscraper is to be built near the coast, as the company announced to ntv.de. “Construction can begin when there is a customer.”

Also the Dutch company Blue21 plans floating cities that are initially designed as extensions of existing coastal cities. Only in the subsequent development steps should it go out to sea. Floating dwellings are a big issue, especially in the Netherlands: more than a quarter of the country is below sea level. “Schoonschip”, the first completely sustainable floating quarter, was recently built in Amsterdam. There is even one in the port of Rotterdam floating cowshed.

Another group of marine pioneers also associate floating cities with political ideas: the so-called Seastaders. They dream of entire nations on the high seas – outside the territorial waters of today’s states. The marine start-ups are supposed to compete with each other for residents, whereby the best form of government is to emerge. “In such an aquatic setting, I am a customer looking for government services,” said Joe Quirk, president of the Seasteading Institutes. Unlike on land, residents with their floating houses can simply switch providers if they are dissatisfied. The motto: “Floating beats voting” (German: swimming beats voting).

“Cities on the Ocean before Houses on Mars”

Apartment with sea view: These Seapods are to be built off the coast of Panama.

The sea-reading movement also includes those Ocean Builders – a group of entrepreneurs who want to build the ultra-modern looking Seapods in the sea off the coast of Panama. These should cost less than an average European house. However, the floating apartments will not yet be completely self-sufficient. Electricity will initially come from the land, and waste will also be disposed of on land.

But the sea leaders are also concerned with sustainability. “Floating cities are the next step beyond sustainability,” says Quirk. “Every floating house you build increases the number of living things at sea.” Because the buildings on the sea would create new habitats for animals and plants. The human sea pioneers would then practically have a “coral garden” on their doorstep.

Quirk believes that the realization of floating cities is imminent: “The first floating urban districts near land should emerge in the next few years. The first pioneer village in international waters should be established within a decade.” If a profitable economy in the sense of the “blue economy” – the sustainable use of all resources – could be built on the sea, the villages would grow into cities. Quirk is certain: “We will have cities on the ocean long before we have houses on Mars.”