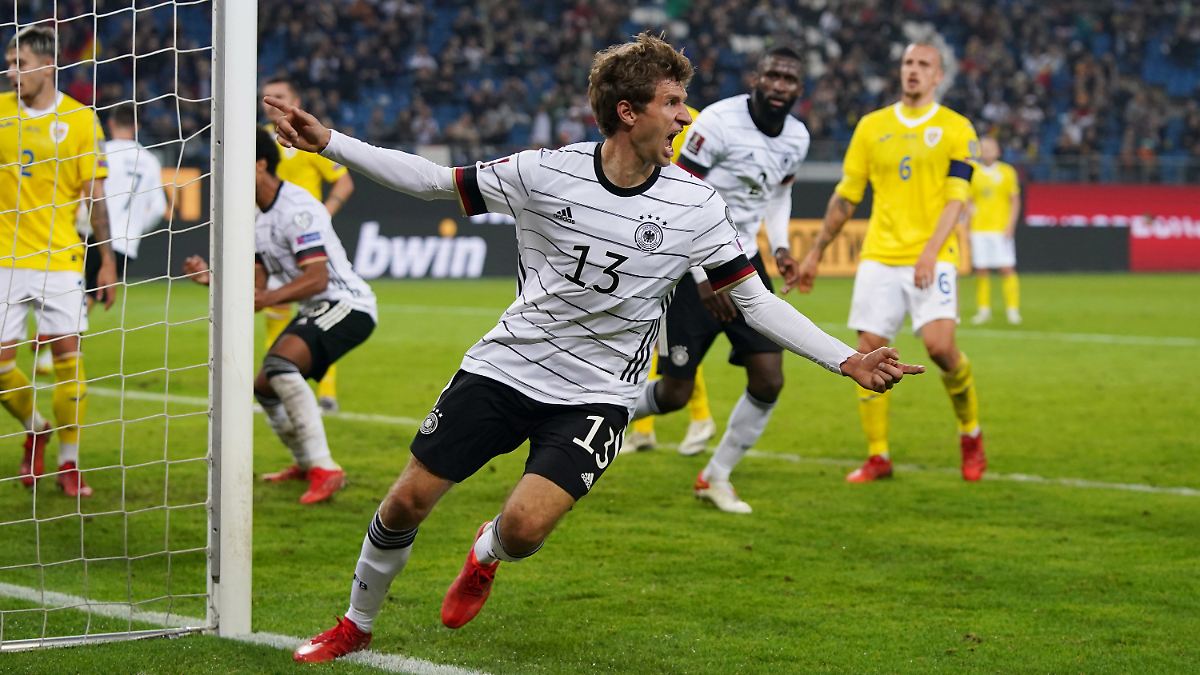 It happened: Hansi Flick had to accept the first goal against Romania for the German national soccer team under his leadership. The World Cup qualification is almost certain, because the team shows will and passion. And with Thomas Müller a super joker does everything right.

What happened in the Hamburg Volksparkstadion?

Attractive football in Hamburg’s Volkspark Stadium? Evil tongues claim that nobody could have expected that anyway. Unlike Hamburger SV, which is currently only in seventh place in the 2nd Bundesliga, the DFB is still leading group J in the World Cup qualification. Likewise, no one can claim to have not been properly entertained for 90 minutes. The offensive had a violent urge to move forward, the desire to play was clearly recognizable. And the offensive also included Jonas Hofmann and even Niklas Süle for a long time, who was always involved in the front. “It was great,” said Thomas Müller – of course, by then he already knew that he would score the winning goal late.

Because that happened in Hamburg too, from which national coach Hansi Flick knew that it would happen at some point: He conceded a goal. So his team, but the first one with him as head coach. HSV has already got eleven this season … Marc-André ter Stegen, who moved in at short notice for the injured captain Manuel Neuer, knows the situation. It was his 26th international match, it is only the 15th that he was able to win. The relationship between the DFB-Elf and Ter Stegen is a complicated one. On Monday, Neuer should be able to play again, Flick assured him before the game.

The 90 minutes in the feature film

5th minute: Penalty! Or not. Timo Werner runs into the penalty area, is lightly touched by Andrei Burca – and falls. The touch was too light, according to the VAR check. But no penalty, decides referee Cüneyt Çakır. Joshua Kimmich waited for nothing at the penalty spot. The decision took (again) quite a long time.

9th Minute: TOOOOORRRR FOR ROMANIA: Instead of the potential German opening goal, there is a quick counterattack in return – and the 0: 1, there is the first goal for the DFB team under Hansi Flick. In the fourth game it happened, the executor is Ianis Hagi. That was far too easy: Antonio Rüdiger lets himself be tunnelled, Thilo Kehrer also watches more than he intervenes, Leon Goretzka rushing up can no longer do anything. Hagi hits the far right corner with the left prick. Nice to look at, if you don’t keep your fingers crossed for the Germans. Hagi, of all people, the son of the famous Gheorge Hagi, the best Romanian footballer of all time.

17. Minute: The first big chance for the DFB team looks very strange. Reus crosses from the left into the penalty area, keeper Florin Nita is on the ball in front of Serge Gnabry, who jumps over the falling goalkeeper – but hits him on the head. Gnabry also remains lying, next to him the ball bounces on the ground, Timo Werner rushes over, is shot, whereupon the ball flies to Gnabry lying in front of the free goal. In his twisted position, he gets his right outstretched leg to the ball, but it flies just past the goal.

36th Minute: The DFB-Elf has constricted the Romanians in the past few minutes just before and even in their own penalty area. The pressure is great, the ball flies back and forth in front of the goal repeatedly, comes in the direction of the box several times – but does not go in. Reus with a remarkable shot from the far left, Goretzka with a low shot, Gnabry from the right in the middle, but Nita is on. All nice, but none of it counts.

41st Minute: Nicolae Stanciu is very lucky that he only sees yellow. From behind he kicks Kimmich in the calf with no chance of the ball. The material does not withstand the rough test, the socket tears, the tunnel is immortalized on Kimmich’s skin.

44th Minute: Gnabry has apparently had enough of passing and pecking around in front of the goal. Takes a heart, pulls from the right inwards at full speed and closes from about 18 meters. However, the low shot goes a few centimeters to the right of the goal.

45th + 1 minute: Rüdiger also wants to know. He comes after a free kick by Kimmich in pursuit of the ball, but his shot goes far to the left of the goal. Then turn up your nose yourself.

45th + 2 minutes: And already Rüdiger is needed back again. Puscas is through after a quick switch, but Rüdiger can clear the corner in the sprint, which does not bring anything.

Half-time: take a deep breath. The Romanian defensive will especially like that. Kimmich prefers to get upset about the foul against him when he goes into the cabin and shows the referee team his calf again.

47th minute: Rüdiger on fire. A counterattack by the Romanians on the right is prevented by slipping into Andrei Ratiu’s run from the sprint – and shooting the ball out of the way without hitting the Romanian.

48th Minute: Again action in the German penalty area. Stanciu plays left to Mihaila, who runs in and lets George Puscas get on the ball. But Süle is there and the end of the line.

49th Minute: A bit like handball, it goes straight into the opposing penalty area in return. But Reus’s flank is unmatched.

52nd Minute: TOOOORRR FOR GERMANY! 1: 1, Gnabry pulls after a transfer from Reus just before the penalty area – and Nita has to look behind for the first time. It is Gnabry’s 20th goal in the 30th international game, his fourth in the fourth game under Flick, all respect.

58th Minute: The fans in the stadium already have the scream on their lips, but Reus straddles Gnabry’s cross into the Hamburg night sky. The offensive combinations are pleasing, give hope for the opening goal.

62nd Minute: Leroy Sané is not rewarded. A nice deep run towards the Romanian gate, but at the end it lacks. He tries it himself instead of giving up – and grimaces himself. But the level of commitment is as high as it was recently with Bayern. So up.

73rd minute: The pressure continues. Chances after chances, they don’t go into the goal. The final strength of the DFB team is to be criticized. Kehrer crosses too far, Gnabry fishes the ball in front of the goal line, but Sané thrashes the back pass over the goal again.

76th Minute: Substitute Kai Havertz gets the ball from substitute Thomas Müller at the center circle and storms off. In the penalty area, Adrian Rus, who was hurrying, can barely pull him off.

81st Minute: TOOOORRR FOR GERMANY! 2: 1, and who does it? Thomas Müller, with the help of his Bayern connection and a presumably rehearsed trick. Goretzka extends a Kimmich corner with his head, Müller has sneaked out of the hustle and bustle at the second post and pushes the ball over the goal line. You can hear the collective sigh of relief in the stadium.

90th + 3 minutes: Take a quick breath and almost the 2: 2 would have fallen. It would have been an own goal by Rüdiger who got the ball to his shin. But in the hustle and bustle in front of Ter Stegen everything is going well again. The following corner does nothing.

Hansi Flick’s winning streak continues. Fourth game, fourth win. Will, commitment – also at Sané – and passion are on the plus side of the team. Finally, the three hoped-for points for the World Cup qualification, with which Germany continues to lead Group J with 18 points. The “fresh breeze” with which the fan club intended to cheer on from the stands this time can certainly be attested to at the DFB. As in the 1-0 win in the first leg, there is only one goal more than the opponent has to show, but unlike in March under Löw, the Flick team continues to play as last with visible joy and belief in themselves.

We urgently need to talk about the single-mindedness of the offensive. Much in front of the Romanian goal, well worth seeing, the opposing defense busy, but … the final consequence is still missing too often. The statistics counted 14 shots on goal – two went in. With 75 percent possession, they finally beat 42nd in the FIFA world rankings. But only in the 81st minute, only with the inclusion of the super joker Müller. It sounds arrogant, but the German team should have made the victory clear beforehand.

Instead, the first goal in the Flick era was conceded early on because the fast-moving Romanians once successfully escaped. Due to the short time with the team, he could only go into “details, especially on the defensive”, Flick had said before the game on RTL. Rüdiger, Kehrer and Co. will know that the assignment in the 9th minute did not match, even without any flicks explicitly addressed. The defenders will thank Müller that they may be talked about less tomorrow than it could have happened.

The DFB-Elf will fly to North Macedonia on Sunday. Bad memories of the very unsightly 1: 2 bankruptcy on March 31 in Duisburg are awakened. This disgrace must be stamped out. To ensure that things run as smoothly as possible, the DFB is committed to an orderly journey to Skopje. The airline Austrian should fix it. As is well known, the charter plane of a Lithuanian company caused chaos in September when the return trip from Iceland unexpectedly led via Scotland. The backup generator was defective. I don’t want that to happen again. World Cup tickets can already be purchased in North Macedonia.

What do those involved say?

Hansi Flick: “The team fought, went all in. The spectators went with them. We never gave up, we had self-confidence. Of course, the precision of one or the other was not as we imagined it would be. The victory is But in the end it was more than deserved. We determined the game for a long time. “

Thomas Müller: “I thought we played a very committed game. If you go into the break with 1-0, it’s not a satisfactory feeling, but we had the feeling that we deserved more. It was all the nicer it was that we rewarded ourselves with a 2: 1. You also have to pay a compliment to the fans: even though we were 1-0 down, the performance was rewarded, and when the 2-1 fell it was a minor one Explosion. You could feel the connection, we really enjoyed it on the field. “

Serge Gnabry: “The sooner we qualify, the better. That was a big step today. Now we want to make it clear on Monday.”

Joshua Kimmich: “We could have made the game easier, we unfortunately fell behind. But everyone in the stadium noticed how important this game is to us. In the end we were rewarded for it.”

The record scorer in the 2nd division – also successful in the Volksparkstadion – was ultimately not needed.