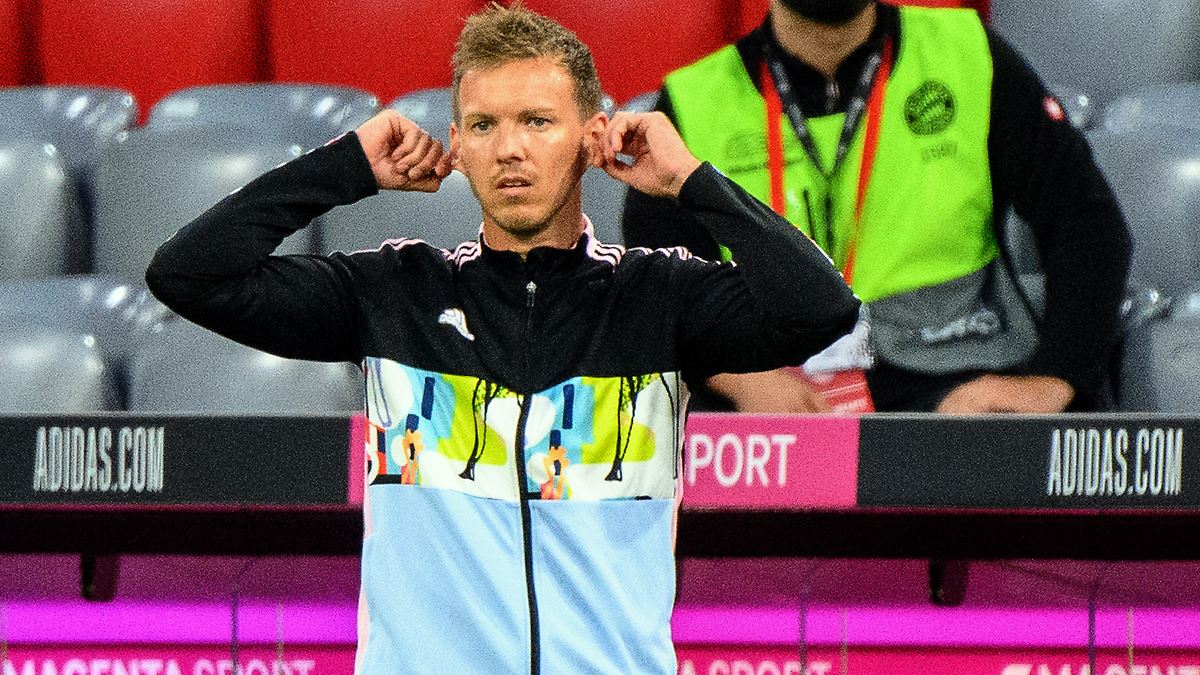 To be the coach of FC Bayern is a “dream job” for Julian Nagelsmann. In his first 100 days with the record champions, he has already set the first accents. His predecessor also watches him attentively. But an opponent is actually missing for an evaluation.

Julian Nagelsmann was delighted that Bayern had so much confidence in him. But he fears that the matter will not end the way everyone involved imagines it. Five years together, at least, the coach thinks that is unlikely. But he doesn’t think that’s a utopia either. And the 34-year-old, who has been in office with the record champions for 100 days since this Friday, also has no plans to accelerate an early end of his time in Munich.

That’s good news. At least for the powerful bosses of the club. They are actually no longer called Uli Hoeneß and Karl-Heinz Rummenigge, no, the defining characters are now Oliver Kahn and Hasan Salihamidžić. The sports director should meanwhile be happy that his new coach is not only working very successfully, but is also not pestering him publicly with transfer requests. Predecessor Hansi Flick had done this with considerable regularity and thus caused an emotional state of emergency on Säbener Straße, which was last known from the Hollywood 90s.

Hansi Flick has moved on. He had lost the power struggle with the sports director, but found his luck with the German Football Association. There he was hired as national coach and can now do what he likes to do best: put together a squad according to his wishes, without interference from powerful bosses. Of course, Flick relies on a large number of FC Bayern players. He’s basically building a copy of his successful team from Munich for Germany. By the way, in the evening she will play against Romania in the World Cup qualification.

The “real” successful team in Munich is now being guided by Nagelsmann. The frame in which a 100-day picture hangs is a little slanted, but the work itself is all the more impressive. The preparation was, well, very modest. Of course, this was mainly due to the fact that he did not have a large number of top staff available. The aftermath of the European Championship. New coach, new players, new ideas and not a solid run-up to a season, that’s usually a bad symbiosis. And it was actually to be feared (if you like FC Bayern) that the start of the new era could be very, very jerky. But no, the trainer harmonized his orchestra surprisingly quickly. That started very seriously against Borussia Mönchengladbach (1: 1) and in the weeks afterwards every opponent was tough. The pace of comodo was increased to a wild presto.

The only stupid thing is that the last impression is not entirely correct. Because before football Germany directs its focus on Hansi Flick and the national team, Nagelsmann conceded his first bankruptcy in a competitive game with FC Bayern. There was a bizarre 1: 2 against Eintracht Frankfurt. Bizarre, because the team played anything but bad, but scored far too rarely. Just once. Storm giant Robert Lewandowski and his colleagues failed umpteen times because of a sensational Kevin Trapp. Incidentally, Flick did not make the DFB squad this time. You can find it funny, but that’s how it is.

You can also find it funny how Julian Nagelsmann moves across the club grounds of FC Bayern. Occasionally he rushes past the seats on an electronic skateboard. It looks modern, futuristic and a little remote. The many club employees should “not see him like an alien,” he said recently, “just because I’m the professional head coach.” But that it works the same way? Oh well. In his external presentation he is the absolute opposite of his predecessor, dares to be more fashionable and is always concerned with entertainment and slogans in the media. He’s a bit like Thomas Müller among the exercise instructors. Flick is more of the factual type with the implied smile. More like the Robert Lewandowski type.

In Munich you can handle this guy

In Munich, on the other hand, they are not at all unfamiliar with the new man’s manner. Captain Manuel Neuer, who had a very intimate and close relationship with Flick because of the extremely rebellious challenger Alexander Nübel (is currently on loan to AS Monaco), says about his new, young boss that he is “playful”, but “still very dominant.” So is his game idea. And because this matches perfectly with the mysterious Mia-san-mia-Club-DNA, Nagelsmann was also the desired solution. When he was introduced a good three months ago, he admitted that he “doesn’t want to turn everything upside down”, but that he already intends to implement one of the team’s unmistakable football. It is less risky than under Flick, less aggressive, but more complex, striving for even more overwhelming control.

And at FC Bayern you can already recognize this new signature. That’s what Oliver Kahn and Karl-Heinz Rummenigge say. The former boss no longer has the very difficult word, but you still listen when he says something. The happiest man in the world of record champions is likely to be Salihamidžić. He is not only happy about the new calm, but also about the close exchange and the good input. Then it can probably also be about the squad.

There was a lot of discussion about him in the summer. Is the lineup really enough to achieve the big goals? It was a debate, sort of the post-flick legacy. There is no answer to this after 100 days under Nagelsmann. The team has already played against clubs with big names. But a top team in top form wasn’t there yet. FC Barcelona is plagued by a madness of school and Lionel Messi in the worst crisis of the past decades, RB Leipzig is struggling for bloodletting in the direction of Munich (in addition to Nagelsmann, the Saxons also lost Dayot Upamecano and Marcel Sabitzer to the record champions and Ibrahima Konate to Liverpool ) about the form and relationship with the new trainer. And BVB was not yet at the level of the (spectacular) opportunities in the Supercup.

This should not and does not have to downplay the work of the coach. After all, he had to organize a reorganization of the team himself. The entire central defense had broken away: David Alaba plays for Real Madrid, Jérôme Boateng signed with Olympique Lyon and the rattling Javi Martinez is enjoying early retirement in Qatar. What works amazingly well: Niklas Süle’s sporty revival. In the past few years he has been criticized almost continuously, but suddenly plays very confidently and discovers his offensive urge as a temporary help on the right side. Lucas Hernández does his job confidently, he always worries that something will happen to the body again. There remains Upamecano. The riddle remains. In wild mode, it alternates between strong actions and light to severe dropouts. With the tendency towards the second. A bit like young Boateng. So it’s good for the Bavarians that not only the most powerful guns were built in front of the Munich Wall during the discovery phase. But that changes immediately after the international break, when Bayer Leverkusen is the spectacle of the Bundesliga.

On the offensive, on the other hand, it is very well mannered. The steep ascent from Leroy Sané is particularly noteworthy. However, there are very different approaches to explain why the national player is currently a man for the difference. Before he went to the DFB team in September, to his ex-coach Flick, he was in pretty bad shape. He dragged the weak EM to the club. In Munich he was whistled by his own fans. He is now a long way from that, even if, of course, everything is still not going smoothly for him. But in the national team he was able to collect playing time and self-confidence. He let Flick bustle on the outside lane, but didn’t forbid him to go into the center. In return, the player worked against the ball with bilious body language – and successfully. Nagelsmann adapted the role, developed it further. Thanks to the attacking full-back Alphonso Davies, Sané has even more space at the front. He will be rewarded. The trainer too.

He has adapted a few other things from the successful time of his predecessor. In the central midfield, he relies on the perfectly coordinated block of Joshua Kimmich, Leon Goretzka and Thomas Müller. This is one of the most powerful and powerful that international football has to offer. Robert Lewandowski is also set. You don’t really have to write. Although in the past it was often more like that: Nagelsmann and center forward, that wasn’t much love. Neither at TSG Hoffenheim nor at RB Leipzig. And there is still room for improvement at FC Bayern. The Pole scores impressively often in all competitions, but doesn’t seem as dominantly integrated as he did under Flick.

By the way, he’s looking at Munich these days with no resentment and looking forward to his successor with a lot of joy. “I think Julian is a great coach, a top coach. Especially at a young age that is very astonishing. He does an outstanding job,” said the national coach, who is a frequent guest in the stands at Bayern games, recently to the Germans Press agency. “I’m really excited to see the team play football.” There would be no fear of contact between them. Why also? “I have zero point problems with Julian. We talk to each other more often. That is just part of it. We have known each other for a long time. It is normal in football that a successor comes when you leave,” says Flick.

What is not normal for a 34-year-old to go his way so convincingly. They had such a young man on the sidelines in Munich before. His name was Sören Lerby. He only stayed five months. Now it should be five years …