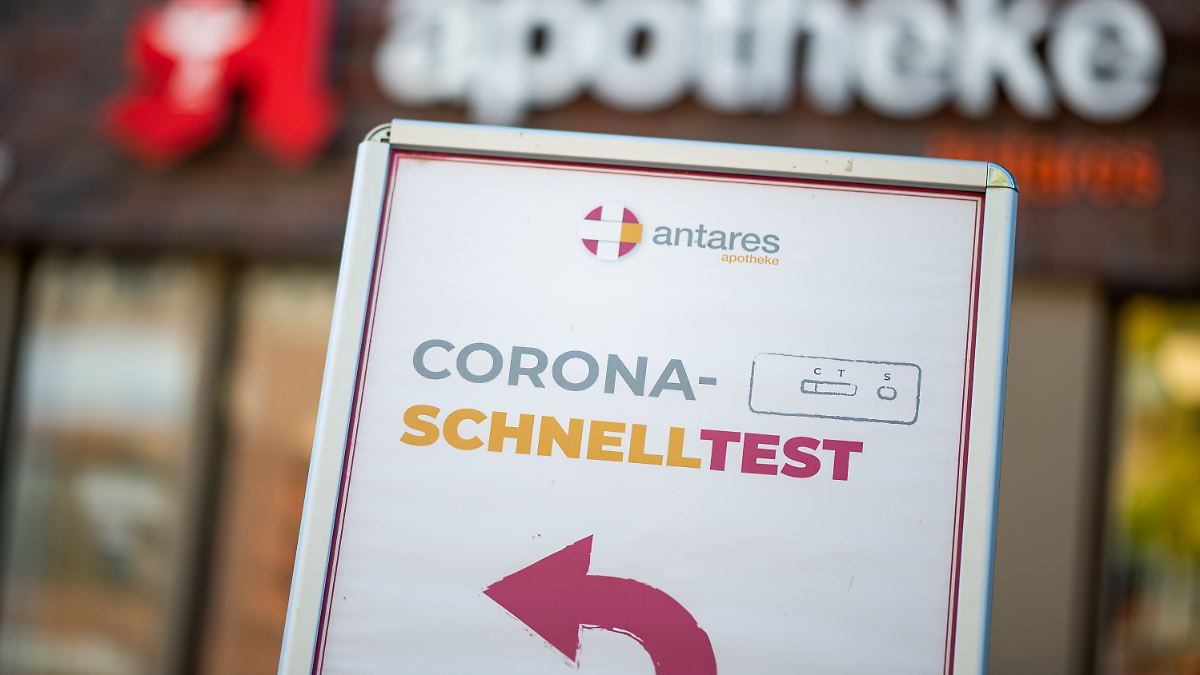 Everyone can get vaccinated, so the state no longer has to pay the costs for corona rapid tests – this is the federal and state decision that is now coming into force. This means that life is now becoming expensive for most of the unvaccinated and more complicated for everyone.

Without a vaccination, everyday corona will be more complicated for many from next week – and also more expensive. Because rapid tests, which non-vaccinated people now often need to access restaurants or events, will no longer be free for everyone from October 11th, i.e. from Monday. So it was announced several weeks in advance, now the time has come. This should and could also mean a practical incentive for people who are still hesitant: Tests become more tedious and now usually cost something, vaccinations do not. But there is also criticism of the regulation.

What will change from Monday?

In the future, you will usually have to pay for quick tests by trained staff, including a certificate of results. They remain free for people who cannot be vaccinated. This is set out in an ordinance by Health Minister Jens Spahn, which implements a federal-state resolution.

Chancellor Angela Merkel and the Prime Ministers had agreed in August that the offer, financed by the federal government since March, should end with free “citizen tests” for everyone without corona symptoms. Since free vaccinations are possible for everyone, taxpayers no longer have to pay the test costs on a permanent basis.

For whom exactly are there further free tests?

A few transitional rules are planned. They should initially apply until December 31st. Tests remain free for until then

Children from 12 to 17 years pregnant

The Standing Vaccination Commission (STIKO) has only recently issued a general vaccination recommendation for them, so they should have more time for vaccinations.

who cannot be vaccinated against the corona virus due to a medical contraindication – such as hypersensitivity – who are suspected of having a corona infection who need a negative test result to end a quarantine have not yet completed or are only twelve years old for three months. Persons from abroad who are studying in Germany and who were vaccinated with vaccines not recognized in Germany until December 31st.

What evidence do you need now for free tests?

In order to continue to receive free tests, you have to present an official ID with a photo to the test center – in the case of children, the age must also be proven.

Extra evidence such as a medical certificate is required if you cannot be vaccinated for medical reasons – according to the ministry, a diagnosis does not have to be given. However, the name, address and date of birth as well as details of the issuer of the certificate must be on it. The maternity card can be used to prove pregnancy.

And what should corona tests cost in the future?

The new market conditions have yet to show how expensive tests will be. Recently, supply and demand have decreased due to more and more vaccinations. For example, around 6,000 pharmacies were to be found on an information portal at times that were doing tests. According to the association, there are now 4400. In addition to pharmacies, thousands of test centers have also been set up nationwide. The first are already tight again, a real wave of closings could follow from Monday. Providers have to calculate costs for material, separate rooms and personnel. It is expected that prices around 20 euros will be established on the market. Those who want or have to be tested by the Bavarian Red Cross can still get away relatively cheaply. “The test price in the BRK test centers is currently set at 11.50 euros”, according to the BRK. On Sylt and in Hanover, rapid tests are currently offered for 15 euros, in Berlin and Munich test appointments for the next week can easily be booked for 19.90 euros, in Cottbus in Brandenburg, 27.48 euros are due. At the Düsseldorf and Frankfurt airports 29 euros are to be paid. In Leipzig and Dresden, tests cost up to 34.90 euros, depending on the provider, at Stuttgart Airport with 35 euros and the test center in Cologne’s Südstadt district even wants 42.75 euros. It is only more expensive at Munich Airport. The provider Medicare requires 73.27 euros. Pro quick test, of course.

So far, providers have been paid 11.50 euros for each rapid test, and around 43 euros for more precise PCR tests. For self-payers, however, these are often more expensive – the more the faster the laboratory result comes. The federal government pointed out that employees in companies can be tested free of charge.

What are the arguments against paid tests?

The Green health expert Janosch Dahmen warned that the change would come too early. “Without free tests, we will get fewer test results and more infections will go undetected,” he said. “We’re running into a shadow pandemic.”

Instead of removing free tests, they should be linked to the vaccination campaign. “Anyone who accepts vaccination advice should receive a free test in return.” Either way, the federal government has incurred considerable costs. Since the beginning of a separate recording of the “citizen tests” by the National Association of Statutory Health Insurance Physicians at the beginning of July, more than half a billion euros have been billed for it.