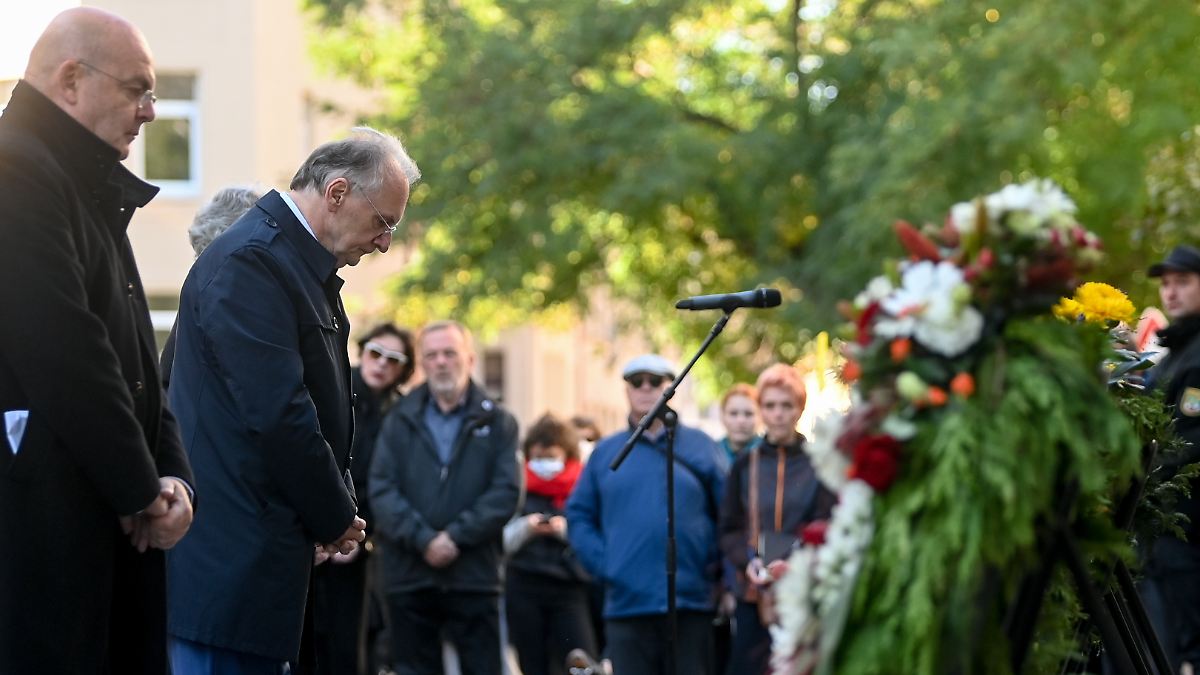 Exactly two years ago to the day, anti-Semite Stephan B. tried to storm the synagogue in Halle – he failed and shot two people at random in the city. At the memorial event, Saxony-Anhalt’s Prime Minister Haseloff called for a resolute fight against hatred and agitation.

On the occasion of the second anniversary of the Halle attack, Saxony-Anhalt’s Prime Minister Reiner Haseloff warned against further polarization of the political debate. “The change and brutalization of the language is a warning signal,” said Haseloff at a memorial event in Halle. “The right-wing extremist attack in Halle shows that word and deed are not far apart.” Haseloff called for moral courage: “Let’s draw a red line of decency together: we have to consistently oppose defamation of the other.”

The attempted attack on the synagogue underscores the importance of keeping the memory of the Holocaust alive and passing it on from generation to generation. “Not only schools have to take care of this, but also families, groups of friends, clubs, associations and parties,” emphasized Haseloff. Halle’s Mayor Egbert Geier said: “October 9, 2019 is one of the blackest days in Halle’s recent history.” The act “struck a deep wound, this wound leaves a permanent scar.” Geier warned against isolation and exclusion: “It is precisely the most open society that is best suited to stand up to any form of racism, as it were.”

The right-wing extremist assassin Stephan B. tried two years ago to storm the synagogue in Halle and shoot the assembled community members on the highest Jewish holiday, Yom Kippur. The attack failed because the synagogue door was secured and the self-made weapons that B. had constructed for the murders were jammed. B. subsequently shot two people in the city. In the dock, the perpetrator had admitted his hatred of Jews: He wanted to motivate other extremists to attack. The higher regional court in Naumburg sentenced B. to life imprisonment and preventive detention at the end of 2020. A reviewer diagnosed him with a personality disorder.

“Hatred of Jews is a disgrace to our country”

In addition to Haseloff and Geier, the Federal Government Commissioner for the Concerns of Victims and Relatives of Terrorist Offenses, Edgar Franke, also took part in the commemoration. Wreaths were laid at the attack sites – the synagogue and the “Kiez-Döner” in the city center.

The Federal Minister for Justice and Family, Christine Lambrecht, called for a decisive fight against anti-Semitism on the occasion of the anniversary of the attack on the synagogue. “The hatred of Jews is a disgrace for our country,” she said on Friday. “We must do everything we can to protect Jewish life.”

The instruments of the rule of law have been sharpened significantly, including the legislative package against right-wing extremism and hate crime. Courts could now impose much more severe penalties for inhuman agitation, especially for anti-Semitic acts. But much more must be invested in prevention. “We have to make sure that people don’t get caught up in extremists in the first place,” emphasized Lambrecht.