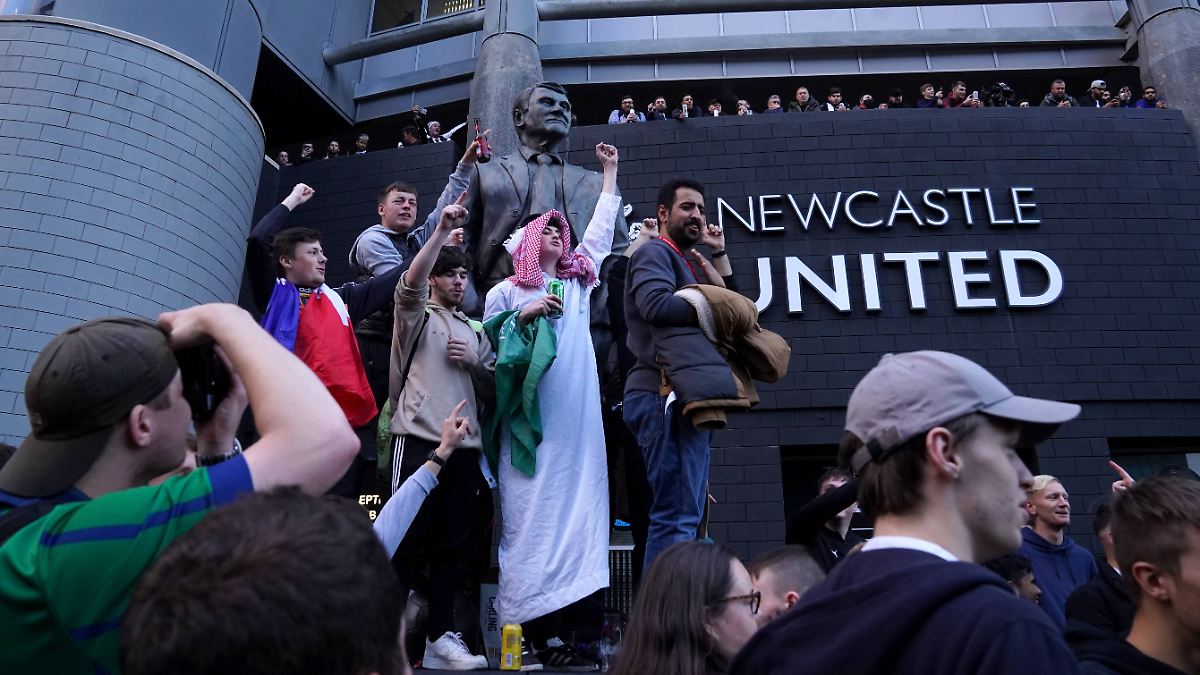 After Paris St. Germain and Manchester City, Newcastle United now also belongs to a wealthy Gulf state with a problematic human rights situation. The fans cheer for the sale of the football club. With the prospect of triumphs and spectacular transfers, moral concerns vanish.

When talking about the richest clubs in world football, Newcastle United must now be mentioned alongside Paris St. Germain and Manchester City. The Premier League has approved the sale of the club to a consortium that makes up 80 percent of Saudi Arabia’s sovereign wealth fund. The purchase price of around 350 million euros is change for an investment vehicle that, according to the New York Times, has assets of more than 400 billion euros. The “Magpies”, as Newcastle United is called because of the club colors black and white, will in future be able to see what has already happened in Paris and Manchester. Namely the transformation of a moderately successful club into a giant of the national and international business – with the millions of a rich golf country.

All parties assert that the fund operates independently of the state of Saudi Arabia, i.e. that the state itself does not take control of Newcastle United. But you can only believe this version if you really want to believe it. Because the chairman of the fund is the same person who is de facto ruler in the country – Crown Prince Mohammed bin Salman. “Nobody who knows anything about the Middle East would be convinced for a second that the state of Saudi Arabia is not in control here,” said journalist and author James Montague in an interview with ntv.de.

According to human rights activists like Amnesty International, there is only one reason for the country’s involvement in the Premier League and that is to try to improve its own devastating image. The technical term for it: sportswashing. Saudi Arabia has been accused of serious human rights violations, disregarding women’s and homosexual rights and suppressing critics. The CIA holds Crown Prince bin Salman personally responsible for the murder of the critical journalist Jamal Khashoggi three years ago. Montague said: “The new owners are not interested in Newcastle, they are not interested in profits. They see Manchester City and PSG how a connection with a football club can improve your reputation.”

Newcastle fans don’t seem to mind that their club is being instrumentalized for political purposes. Since a potential takeover by the Saudis was first debated 18 months ago, they have fallen for the idea, decorated their Twitter profiles with the flag of Saudi Arabia or attacked critics of the deal on social media. When business was officially open on Thursday, thousands of Newcastle supporters gathered in front of St. James’ Park and celebrated as if the team had just won the championship – or at least club icon Alan Shearer announced his comeback. Some fans even disguised themselves as sheikhs. The new owners are saviors for them.

Newcastle is a football-mad city, St. James’ Park is one of the most atmospheric stadiums in the United Kingdom, around the turn of the millennium the “Magpies” played twice in the Champions League. However, under the current owner Mike Ashley, who has been in office for the past 14 years, the club has become the epitome of athletic infirmity. Newcastle was relegated twice during this period. Worse than not winning is just not even trying. It is precisely this sin that Ashley is guilty of, according to general fan opinion. That explains why there are virtually no reservations in Newcastle against the Saudis’ entry. “The takeover gives the fans and the city new life and the chance to believe in their club again,” said the Newcastle Chronicle.

The euphoria is increased when the new owners send the right signals. Amanda Staveley, a British businesswoman who arranged the deal with the Saudis, says that fans will be taken seriously and that investments in infrastructure and the “community” are also planned. Model are the owners of Manchester City from Abu Dhabi around Sheikh Mansour. They are universally popular in Manchester because, in addition to the sporting transformation of the club, they are also responsible for investing in a new training ground and upgrading run-down neighborhoods.

In a rush to the championship? more on the subject

It’s only been a few months since England saw a fan riot after the launch of the Super League, which collapsed in record time. Supporters of the clubs involved took to the streets, the Manchester United crowd even forced the cancellation of the home game against Liverpool. Many observers had the impression that a movement for fair, grassroots and democratic football was emerging in England. But the protest movement quickly dispersed again. At Manchester United, a large part of the clientele has been appeased by the return of Cristiano Ronaldo. And in Newcastle, the euphoria about the new owners shows that football fans still want their club to be successful.

Incidentally, it is far from clear whether Newcastle will play football as good as Paris St. Germain or Manchester City in the future. Various professionals are skeptical. For example, Middle East expert Nicholas McGeehan describes the Saudis’ takeover of the club in an interview with ntv.de as a “short-term PR maneuver” and says: “I would be surprised if they started their business with the same long-term thinking and the same Exercise professionalism like at Manchester City. ” There it took four years after Sheikh Mansour joined the team until the first championship. According to entrepreneur Staveley, the time frame for Newcastle United is five to ten years.