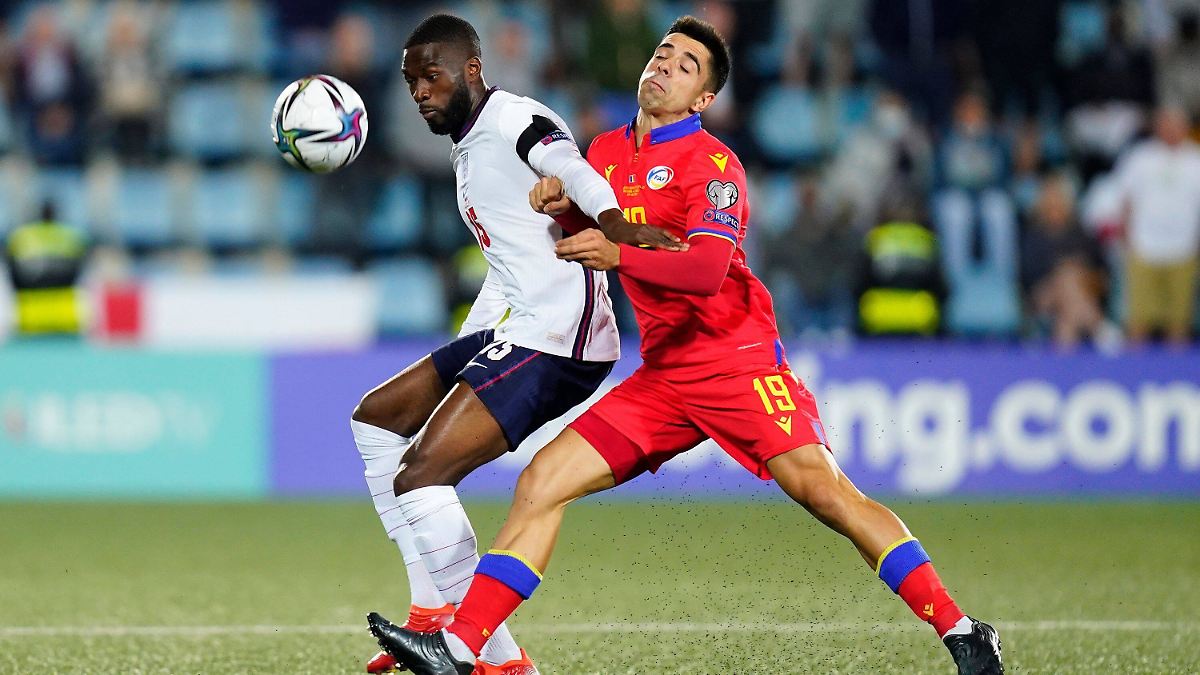 England should hardly be able to take part in the World Cup. In Andorra, the Three Lions win as expected. Denmark defends its perfect record in Group F and now has 21 points from seven games.

England and Denmark march safely towards the 2022 World Cup in Qatar. The Three Lions won 5: 0 (2: 0) in Andorra on Saturday evening, Denmark was harmed in the Republic of Moldova at 4: 0 (4: 0). Sweden and Switzerland meanwhile set course for the play-offs, Poland and Austria also solved their compulsory tasks.

Ben Chilwell (17th), Bukayo Saka (40th), Tammy Abraham (59th), James Ward-Prowse (79th) and Jack Grealish (86th) left no doubt that the European Championship finalist England would qualify for the Will qualify for the final round in Qatar in winter 2022. The game was led by a female referee team – for the first time in the history of the England national team. The 1966 world champion dominated qualification group I with 19 points from seven games, ahead of Albania (15 points), which won 1-0 (0-0) in Hungary. Poland (14) with world footballer Robert Lewandowski follows in third place after a 5-0 (2-0) against San Marino.

Denmark has the perfect record in Group F with 21 points from seven games and 26-0 goals. The European Championship semi-finalist has already secured the play-offs, Scotland are seven points behind with three game days to go, Israel and Austria eleven. The Scots prevailed against the Israelis with 3: 2 (1: 2), Scott McTominay (90 + 4) brought the Glasgow Hampden Park to shake late. After two recent defeats, Austria won 2-0 (1-0) in the Faroe Islands and kept the connection. Coach Franco Foda should be out of the line of fire for now.

Serbia sits at the top of the table

Switzerland made a big step towards the play-offs. The Swiss won 2-0 (1-0) against the third-placed Northern Irish and thus expanded their lead to six points. Top of the table in Group C remains European champions Italy (14), who, however, have one more game than Switzerland (11).

Sweden prevailed in Group B against Kosovo 3-0 (1-0) and secured their second place in the table. Emil Forsberg (29th) brought the hosts with a hand penalty on Siegerstrasse, the former Dortmund Alexander Isak (62nd) and the ex-Mainz Robin Quaison (79th) increased in the second half. Thanks to Greece’s 2-0 (0-0) success against Georgia with national coach Willy Sagnol, Sweden’s cushion is still three points in third place.

Meanwhile, Serbia climbed to the top of the table in Group A. In Luxembourg, the team with Filip Kostic from Frankfurt scored 1-0 (0-0) to overtake Portugal (13) with 14 points, which however still has one game up its sleeve.