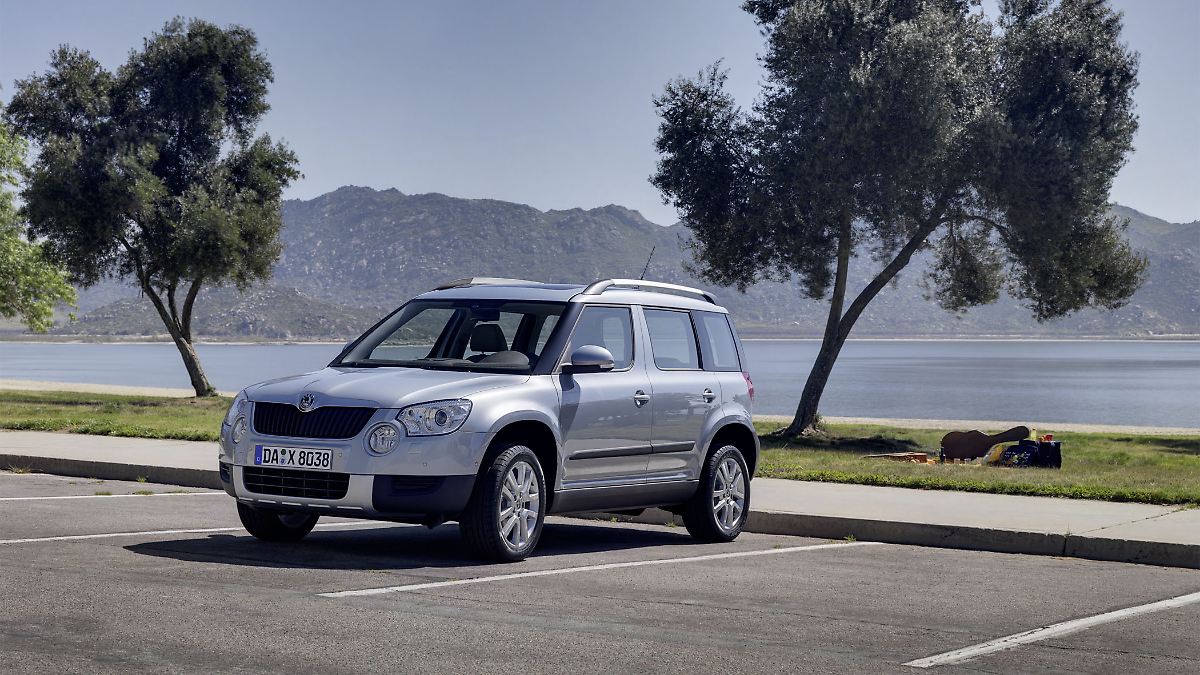 The Skoda Yeti was one of the bestsellers in the Czech portfolio from 2009 to 2017. No wonder, since its technology comes from the VW Tiguan. As an SUV, the Yeti could still inspire today, provided it cuts a good figure as a used vehicle at TÜV.

The Skoda Yeti, which was built between 2009 and 2017, is assessed as “more to be than to appear”. The compact SUV was not a lifestyle product, but rather like the eponymous mystical being from the Himalayan mountains, it was also suitable for more robust use. In addition to the all-wheel drive option, the Yeti also offered many practical features. There was only one beauty award that the Czech couldn’t really win, but it was still popular with customers. The question that remains is how his appearance at TÜV will turn out today.

The luggage volume of the Skoda Yeti hardly differs from that of the then current VW Tiguan, although it was a lot larger.

The 4.22 meter long Yeti was never a fancy off-road vehicle, but it was a kind of people’s SUV. In any case, fans of the Czech box don’t let anything get on their Yeti. And there is a reason for that: the SUV uses the technology of the VW Tiguan. Although the Czech is almost 21 centimeters shorter than its big brother from Wolfsburg, the trunk is hardly smaller. Depending on the seat configuration, the luggage volume varies between 416 and 1760 liters. A smart idea is that the three seats in the rear can be moved lengthways separately from each other. If the seat is removed, the outer ones can also be moved towards the center. If you need the entire rear for transport purposes, you can also remove the three seats. The occupants benefit from the airy feeling of space that the height of almost 1.70 meters and the straight roof line convey.

The interior is objective and clearly structured. The Yeti also scores with good workmanship and simple operation. However, the Czech suffers from a rather mediocre insulation, which emphatically transports engine and rolling noises into the interior with increasing speed. At the end of 2013, the Yeti received a facelift. Since then, he no longer wears his cute four-eyed face, but rather conventional headlights. In addition, it is now available in two versions, a city and an off-road version. The off-road version has black plastic on the bumpers and sills, while the corresponding parts of the city version are painted in the same color as the car. There is also a difference in the shape of the front and rear bumpers.

The Skoda Yeti is also at home off-road with all-wheel drive.

As usual with Skoda, the four-cylinder petrol and diesel, which are available with front or all-wheel drive, come from the VW shelf. The basic unit at the market launch was a 1.2-liter turbo gasoline engine with 105 hp. With a maximum torque of 175 Newton meters, the engine is not a powerhouse, but is sufficient for daily driving tasks, such as the 1.4-liter with 122 HP and 200 Newton meters. Both turbos are only available with front-wheel drive and, according to the data sheet, consume between 6.4 and 6.8 liters on average. If you are looking for the combination of all-wheel drive and gasoline engine, you have to resort to the 1.8-liter turbo, which is available in the versions with 152 PS and 160 PS. The small 1.8 series is connected to a six-speed dual clutch transmission (DSG), the large one to a manual six-speed transmission. This also transfers the power to the front wheels in the 1.2 and 1.4 series, or a seven-speed DSG was available as an option.

Also on offer were a 1.6-liter and two-liter diesel. The 1.6-liter develops 105 hp and was also only delivered with front-wheel drive. The 2.0-liter was available in the expansion stages with 110 PS, 140 PS and 170 PS. According to the manufacturer, an average of 4.6 to 6.1 liters flow through the lines. The most powerful diesel engine came from the factory with all-wheel drive, the other two-liter units could also be ordered with 4×4 drive instead of front-wheel drive. The diesels with 105 and 110 hp have a manual five-speed gearbox, as an alternative to the manual switch, DSG with six or seven gears were available.

The spatial concept of the Skoda Yeti is unique in this class.

With the facelift, Skoda tightened the engine range a little. The 1.8-liter turbo gasoline engine was deleted without replacement, but the 1.4 series was given a version with 150 hp and all-wheel drive. In the diesel segment, the two-liter engine with 110 hp and 150 hp (previously 140 hp) remained in the range.

As is so often the case, the basic equipment lines (“Easy” and “Active”) on the Yeti are also something for those willing to do without. Those who value comfort, on the other hand, prefer to look for an “Ambition” model. Radio and air conditioning are standard features here. If you want a little more: The comfort levels “Elegance” and “Laurent & Klement” offer, among other things, bi-xenon light, reversing camera, leather, navigation system and two-zone air conditioning. In addition, Skoda repeatedly produced special models such as “Monte Carlo” or “Adventure”. In the NCAP crash test, the Yeti achieved a five-star rating. Even the oldest vintages have ESP anti-skid protection on board.

The interior of the Skoda Yeti may seem simple today, but with the right equipment it has everything it needs.

In the general inspection (HU) of the TÜV, the Yeti cuts a pretty good figure. He usually passes the chassis test without any problems, including the emissions test and the functionality of the brakes. On the other hand, problems are caused by the brake discs and oil loss. The TÜV inspectors also repeatedly had to complain about the lighting system. Those interested in used cars should also ensure that they do not catch a copy with timing chain problems. The 1.2-liter turbo gasoline engine causes trouble in this regard, but the 1.4-liter turbos are also affected. The best thing to do is to look for cars that have already been repaired.

Conclusion: The Yeti is practical and variable, solidly made and also available with all-wheel drive. Anyone who opts for the compact SUV must invest at least 4,000 euros. The vehicles in this price range, however, have many kilometers under their belt. If the mileage is less than 200,000, about 6000 euros are called.