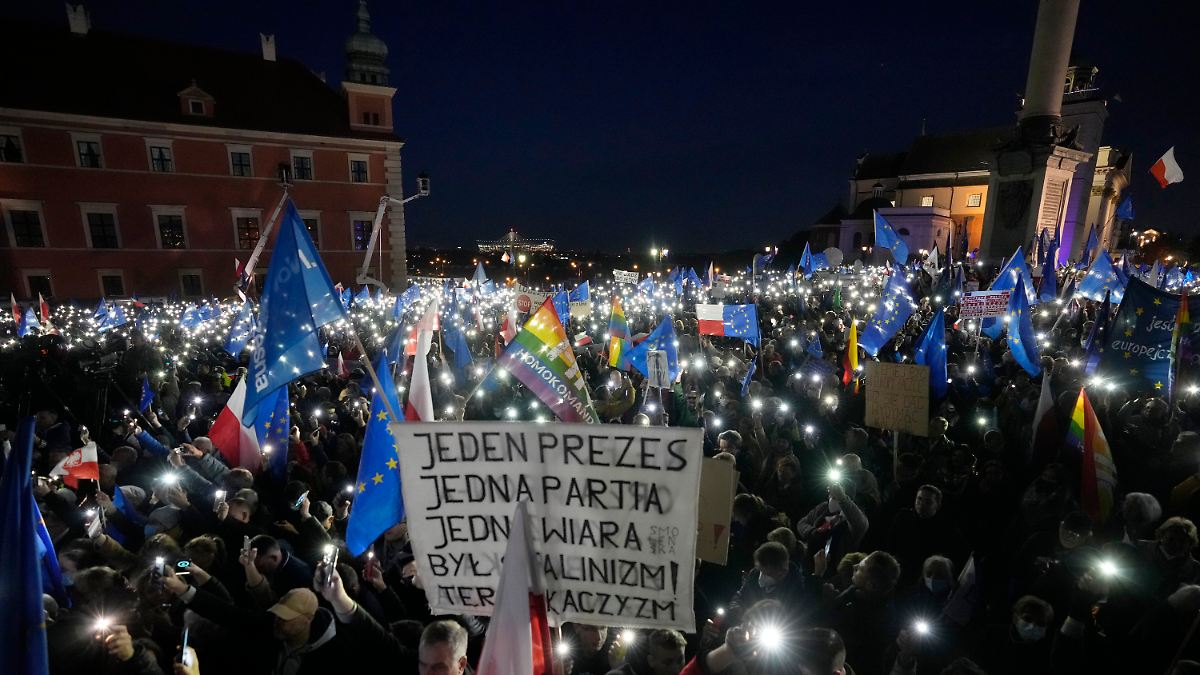 Because they fear for their country’s EU membership, thousands of Poles take to the streets against a controversial ruling by the Constitutional Court. Former EU Council President Tusk called for this. Ex-President Walesa is also involved – and sharply criticized the government.

In Poland, thousands of people across the country demonstrated against a controversial ruling by the Constitutional Court and for their country to remain in the EU. In Warsaw, the demonstrators gathered in Palace Square. They waved Polish and European flags and shouted: “We are staying” and “We are Europe!”. There were also protests in Gdansk, Poznan, Szczecin, Krakow and many other cities.

The country’s Constitutional Court recently ruled that certain elements of EU law violated the Polish Constitution. This gave national law priority over EU law. This decision is fueling the conflict between the EU Commission and Warsaw over the reform of the Polish judicial system. Former EU Council President and Polish opposition leader Donald Tusk called for the protests.

During his appearance in front of the demonstrators in Warsaw, Tusk said that the national conservative ruling party PiS was no longer talking about wanting to lead the country out of the EU. “Poland’s place is in Europe,” said Tusk. “We will win because we are more!” Both Tusk and other speakers were repeatedly interrupted by loud heckling and chants from a counter-demonstration by right-wing national groups.

In Gdansk, Nobel Peace Prize laureate and ex-President Walesa spoke to the demonstrators.

In Gdansk, Nobel Peace Prize laureate and former Polish President Lech Walesa spoke to the demonstrators. “The people who run the state today are a great misfortune for Poland,” said the former head of the Solidarnosc union. No enemy that has ever ruled Poland has divided the people in the country as much as the PiS.

The PiS government has been restructuring the judiciary for years. Critics accuse her of putting judges under pressure. Because of the reforms, the EU Commission has already opened several infringement proceedings against Warsaw and filed suits with the European Court of Justice.