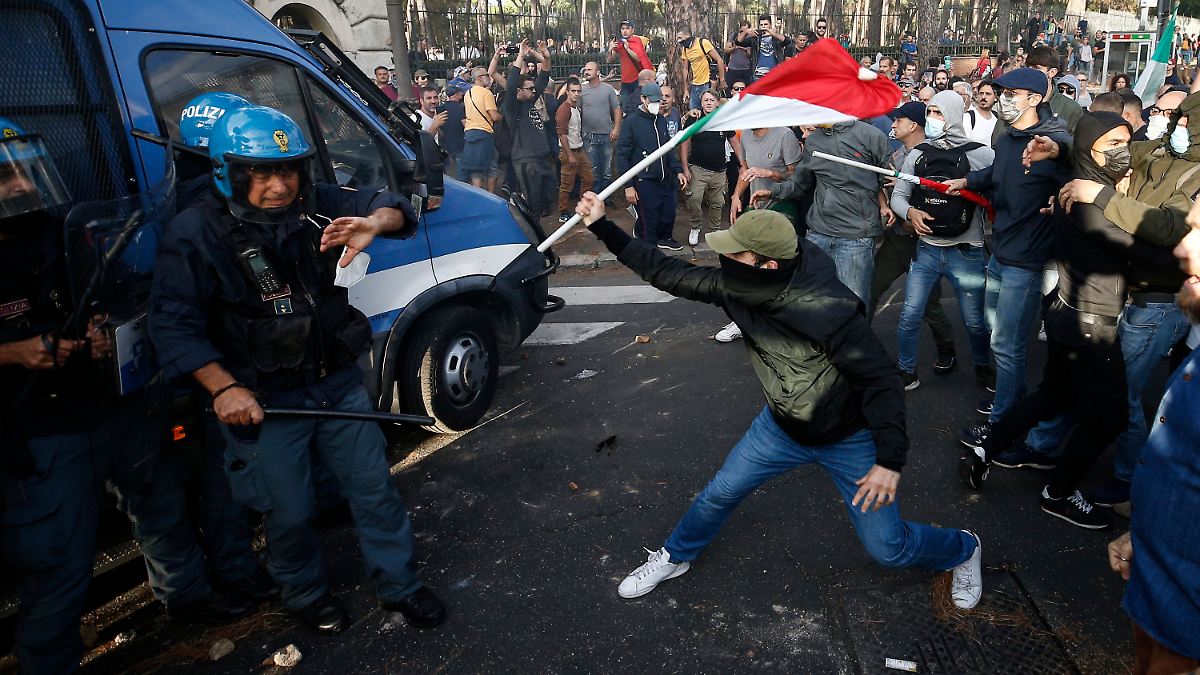 In Italy, the “Green Pass” will be mandatory for all workers next week. Nobody is allowed to do their job without proof of vaccination, recovery or test. Thousands of people took to the streets in Rome against the measure, and some were engaged in street battles with the police.

In the center of Rome, thousands of people demonstrated against the 3G obligation in the workplace. The protests in the Italian capital led to clashes with the police. Right-wing groups were also among the demonstrators. Several hundred people split off from the main march and tried to march to Parliament. They tried to break through barriers and threw chairs and bombs. The police used water cannons, batons and tear gas to stop them.

In the early evening, the protesters stormed the headquarters of the largest Italian trade union, the CGIL. The employee representatives approve the project decided by the government. Politicians reacted in shock to the riots. Prime Minister Mario Draghi condemned the violence in the streets, stressing that trade unions are guarantors of democracy and workers’ rights and that any attempt at intimidation should be severely punished. CGIL General Secretary Maurizio Landini called the attack an “organized act of fascist violence, an attack on democracy and the whole world of work that we will fend off. Nobody should believe that we can push our country back into the fascist era.”

In Italy, further measures against the corona pandemic will come into force next week. From October 15th, every employee in the private or public sector must have a so-called “green passport”, i.e. proof of vaccination, recovery or a negative test – which must be paid for. Around 23 million employees are affected. So far, the Corona pass had to be presented in the interiors of restaurants, cinemas or sports stadiums, on intercity trains, buses and on domestic flights.

The critics of this passport and opponents of the vaccination recently raised the mood against the measure. At the same time, however, this ensures that easing will be possible from Monday: Cinemas, theaters and concert halls can once again be used to full capacity. Discos can also reopen. Entry to all events is only possible with the “Green Pass”. According to the Ministry of Health, almost 80 percent of the Italian population over the age of twelve has been fully vaccinated so far.