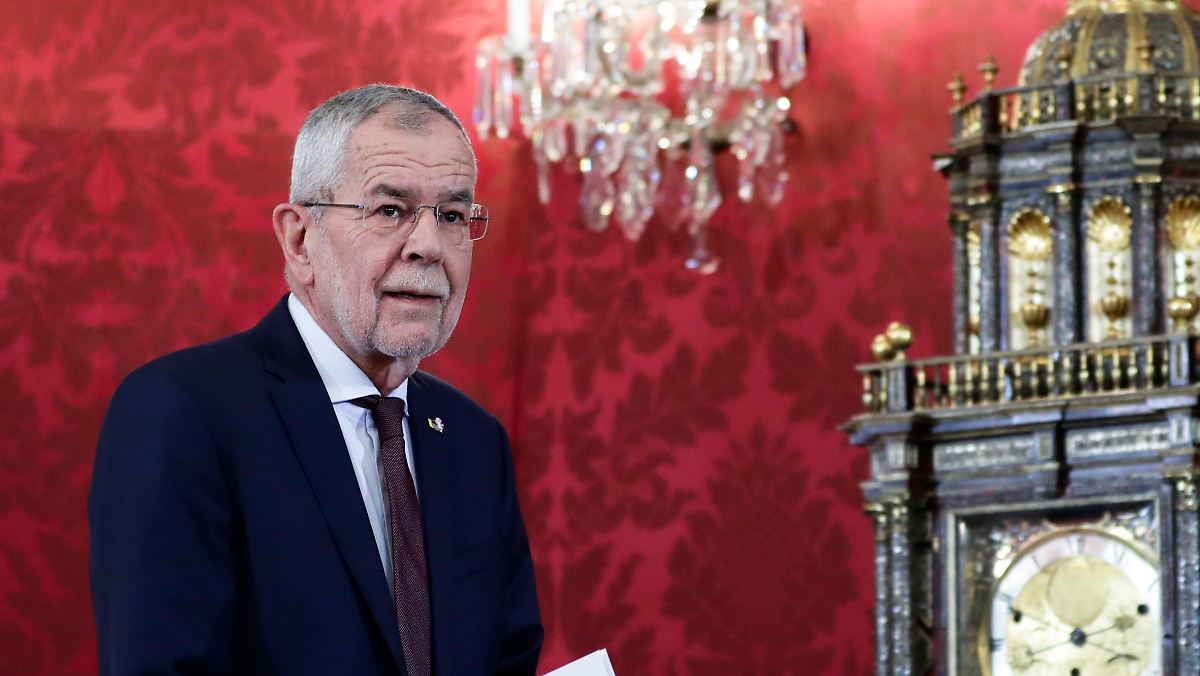 The Chancellor resigned, the successor in the starting blocks: Austria’s Federal President Van der Bellen declares the political crisis in his country over. However, he also urges the parties to regain lost confidence. ÖVP and Greens are at least optimistic.

After the resignation of the Austrian Chancellor Sebastian Kurz under the pressure of corruption investigations, the previous Foreign Minister Alexander Schallenberg will succeed him on Monday at 1 p.m. Federal President Alexander Van der Bellen declared the government crisis “over” after a meeting with Schallenberg. “The work for our country can go on,” said the head of state.

Schallenberg and Vice-Chancellor Werner Kogler from the Greens had assured him that there was a solid foundation for further cooperation, said the Federal President. “Both are in the word,” warned the head of state. “I am now expecting a phase of focused work.”

Van der Bellen urged the new government to restore the voters’ trust in politics, which had been massively shaken by the scandal. For this “serious concentrated work” is necessary. He also announced the swearing-in of a new foreign minister on Monday. It is still unclear who will fill the office.

Schallenberg spoke of an “enormously challenging task and time”. He has been jointly responsible for Austria’s foreign policy in top positions for years. The multilingual, internationally experienced diplomat is just as tough on migration issues as Kurz.

Kogler spoke of a “new chapter in intergovernmental cooperation” that will now be opened. The meeting with the new head of government made him very confident, said Kogler in Vienna. The alliance has already worked successfully. “As a government, we have achieved a lot together over the past few months.”

Kurz resigned on Saturday evening under the pressure of the corruption investigation against him, but wants to remain head of the conservative ÖVP and move to parliament as group leader. The opposition criticized the continuation of the coalition between the ÖVP and the Greens. The “turquoise system” continues with her, said SPÖ leader Pamela Rendi-Wagner, alluding to the party color of the conservatives and briefly warned of a “shadow chancellor”. The head of the liberal Neos, Beate Meinl-Reisinger, said that Kurz would keep all the strings in hand.

The public prosecutor’s office for business and corruption is investigating Kurz and some of his closest confidants on suspicion of breach of trust, bribery and corruption. The team is said to have secured Kurz’s rise to the top of the ÖVP and government since 2016 through embellished surveys and bought positive media reports. In return, the newspaper “Österreich” is said to have received lucrative orders for advertisements from the Ministry of Finance. Tax money should also have flowed in the process.

Kurz rejects the allegations and initially refused to resign. The Greens then threatened to support an opposition motion of no confidence planned for Tuesday if Kurz stayed in office. It would have been the second successful vote of no confidence in Kurz since the 2019 Ibiza affair. Thus everything was heading for a break in the coalition, there were already considerations of a four-way coalition against the ÖVP. On Saturday evening, Kurz finally pulled the rip cord.

According to the Austrian news agency APA, the pressure of the ÖVP country chiefs on the 35-year-old had recently become too great. Among other things, SMS messages between Kurz and the former Secretary General in the Ministry of Finance, Thomas Schmid, caused horror in the course of the corruption investigation.

Among other things, Schmid and Kurz had described the former ÖVP party leader Reinhold Mitterlehner as “huge oasch” or “ass”. Kurz stated in his resignation speech that he had written the SMS messages “partly in the heat of the moment”, that he was “just a person with emotions and also with mistakes”. He would “definitely not rephrase some of the SMS”.

Van der Bellen apologized to the citizens for the disrespect shown by the chats that had become known. Confidence in politics was again massively shaken. “Words alone are not enough here,” said the head of state and called on the political actors and above all the government to convince with deeds.