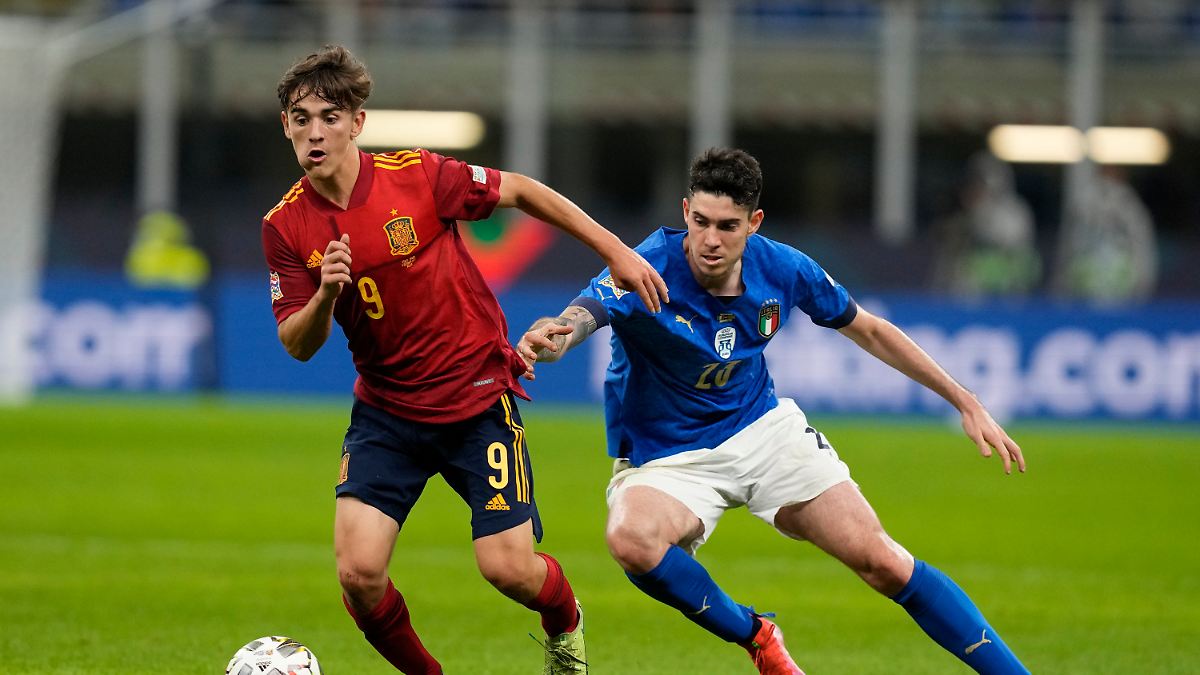 The Spanish national soccer team would like to win another title. That can already work this Sunday evening. Then comes the final in the Nations League against France. The Spaniards put their trust in a young miracle boy.

The anger was great when Luis Enrique announced a few days ago that he trusted Gavi. The anger against the coach of the Spanish national soccer team in the capital Madrid was particularly great. She was close to white heat. Those who mean well by Real were massively outraged. They were therefore outraged that Luis Enrique would rather nominate four players from the gigantic staggering FC Barcelona for the final tournament of the Nations League than one footballer for the leaders of the Primera Division. The coach’s heart is more Catalan than royal. Luis Enrique had played for both clubs. And we owe a lot to both clubs. His great career began at Real, at Barça it was first crowned and then ended.

So now Gavi. He’s 17 years and a few days old. Until a few weeks ago this man, sorry, this boy was pretty much unknown. So far he has reached 363 professional minutes. It’s not very much. But well, Gavi is still very young. These 363 professional minutes impressed the boss of “Furia Roja” so much that he thought: Come on, I’ll take him with me. And then the boss decided before the semi-finals of the Nations League against Italy (2: 1): Oh come on, I’ll just let him play. And he did just fine. So great that no new fires were lit either from Madrid or from the related media. The emotional torches of anger were tucked away again.

Now, however, Gavi was not the man who had decided this game. That was Ferran Torres from Manchester City. The rather “false nine” played against the European champions like a very “real nine” and scored both goals. Now they talked almost exclusively about Gavi, who appeared in midfield alongside the great and great strategist Busquets, both of whom are also colleagues at the club. You talked about Gavi because he was removing Ángel Zubietas. He was the youngest national player in his country since 1936.

But the coach himself voiced the loudest anthem to his discovery: “We are talking about a rare case with him. He plays on the pitch as if it were the backyard of his house, he is the present and future of the national team.” The rise of the 17-year-old is so rapid that even the greedy football exchanges cannot keep up. There is actually no market value for Gavi yet. Meanwhile, Luis Enrique euphorically sings his hymn on: “He’s a gift, a player with personality, with enviable physical capabilities.” Or to put it simply: Gavi is an “extraordinary” talent.

His path is also extraordinary, which could now be crowned with a first big title if one wants to call the triumph in the Nations League a big title. The final against France will be in the evening. Gavi will very likely start again and he will then face top stars like Paul Pogba, Lucas Hernández or Raphael Varane in a direct duel. He doesn’t have to fear that. Because in the semifinals he was already dealing with legends like Leonardo Bonucci, Giorgio Chiellini or terriers like Marco Verratti. Against the European champions, the teenager not only fascinated with his amazing passing game, but also with his robustness and cunning in direct duels and work against the ball. “His job was to cover his idol Verratti, and he more than fulfilled it” said Enrique.

The vita of the man who has no market value and who hit the world’s elite like a comet already reads impressive. He has already experienced more than many a seasoned professional at the end of their career. Gavi has already played against FC Bayern, against Benfica Lisbon and against champions Atletico Madrid with the defensive and mentality monsters of coach Diego Simeone. Everything squeezed into just seven competitive games as a professional. “Gavi is a machine. In San Siro the boy silenced all these critical voices and turned them into praise”, wrote the “Marca” after the international debut against the Italians and asked with appreciation: “Where did you come from?” Good question!

His path started with the Betis Sevilla youth team. At the age of eleven, he moved to the legendary youth academy of FC Barcelona six years ago. In the “La Masia” his talent was not only hinted at, it became apparent all too quickly. As a 16-year-old he played for the 2nd team in the 3rd division.

His remarkable rise in the international shop window is closely linked to the brutal crash of his club. Under the burden of debt and without Lionel Messi’s class, he is stumbling into the worst crisis in decades. And nothing seems to be able to stop the dwarfing of the former giant. Especially not Ronald Koeman. He is shot from all sides in the Spanish media, his end as a coach is longed for by live ticker. But the bosses still hold out, trust him. Whether out of conviction or the need that the separation is too expensive, well, both variants are haunted.

In the struggle for stability and the overwhelming demands of the old and new, Koeman relies on young players. Gavi has been in the squad since the beginning of the season and made his debut against Getafe FC on matchday three. Since then, his value for the Barça game has increased in minutes. In the past three games he has always been in the starting line-up. He is by no means the only talent that has achieved astonishing relevance for the club. Even more influential is Pedri, who is one year older, and Luis Enrique also nominated him for the European Championship against the anger and amazement in the country. There he fascinated an entire continent with his overview and the outstanding passes. At FC Barcelona they comfort their suffering with the tender dream that Gavi and Pedri might become as brilliant a duo as Xavi and Andres Iniesta once did.

A lot of laurel, a lot of pressure. But for now, no more anger and amazement. Not even at Real Madrid and all those who mean well with the “royals”.