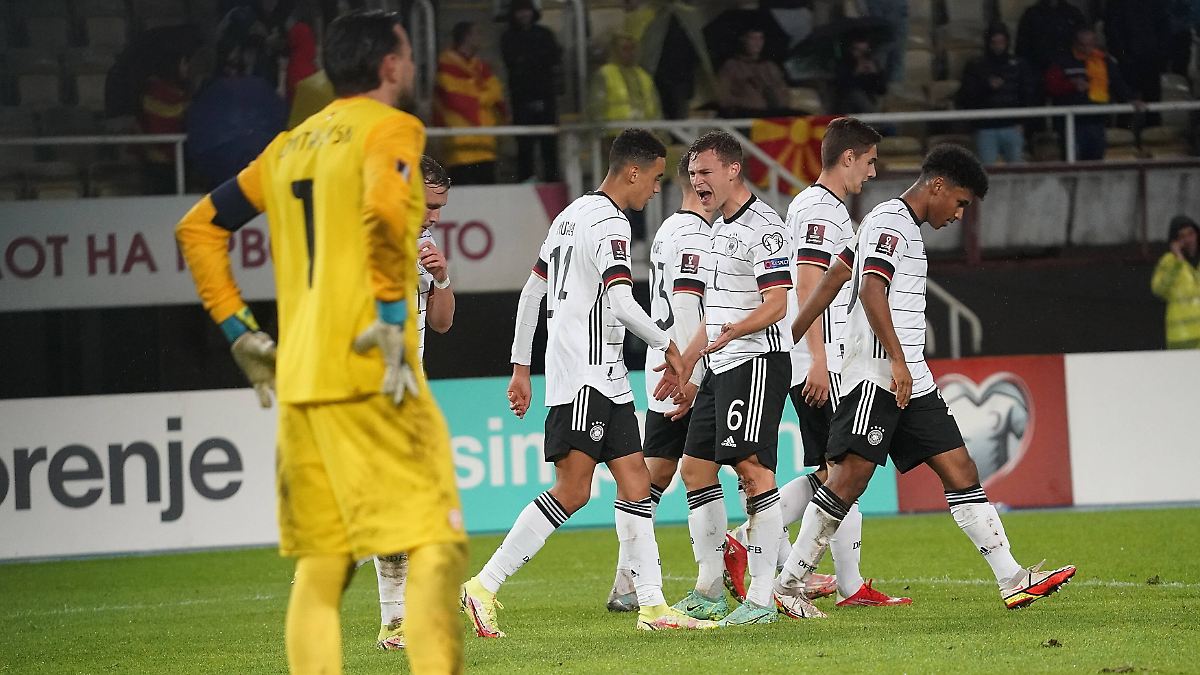 In North Macedonia, Germany’s best footballers will not experience a second Duisburg, but rather qualify confidently for the World Cup finals. They only partially implement what national coach Hansi Flick says. And yet ensure that there is now plenty of time for improvement.

What happened in the Toše Proeski arena in Skopje?

A remarkable evening for German football, and for three reasons. First, because a win in North Macedonia made the successful World Cup qualification perfect. National coach Hansi Flick had previously asked his team “that we qualify as early as possible,” and it succeeded. Thanks to a clear 4-0 win against the ultimately clearly defeated North Macedonians and because Armenia lost 1-0 in the parallel game in Group J against Romania.

Second, because Flick set the record of a certain Joachim Löw in his fifth international match as national coach with a fifth success and he is one of only three German world champion coaches. Surely Flick could have hit the opponents harder than Liechtenstein (2: 0), Armenia (6: 0), Iceland (4: 0), Romania (2: 1) and now North Macedonia. Whereby …

… thirdly, the success in the national stadium in Skopje was the first victory against North Macedonia in the long international history of the German Football Association. Only in the second meeting, sure, but the first was from a German point of view a shame. The DFB team lost 1: 2 in Duisburg in March in a game that felt “like winning the title” for the North Macedonian record national player and record goal scorer Goran Pandev.

And there is even a fourth, but it has little to do with the upcoming remarkable evening for German football. Flick’s opposite Blagoja Milevski also started his new job after the European Championship and was also unbeaten in his first four games. Three draws against Armenia (0-0), Iceland (2-2) and Romania (0-0) followed on Friday with the 4-0 win in Liechtenstein. So now 0: 4, everything back in balance: one win, three draws, one defeat, 6: 6 goals.

The 90 minutes in the feature film

Before kick-off: “The team is well-rehearsed and will […] perform with a lot of self-confidence “, is certain national coach Flick. But he thinks of opponents North Macedonia, who his predecessor Löw in March pretty perplexed made. In the meantime, he expects the German team, as he says on the RTL microphone shortly before kick-off: “Add more without slacking off”. So three points like on Friday against Romania, only better without a gap and better exploitation of chances.

2nd minute: Only centimeters are missing to make it 1-0 – Kai Havertz crosses from the left soulfully on the second post, where Joshua Kimmich comes free to the header. Stole Dimitrievski jerks his hands up fast enough and fends off, the corner that follows brings nothing worth mentioning.

9th minute: The 18,200 spectators in Skopje are really loud for the first time: Macedonia counters on the right, the German – caution, football buzzword – remaining defense leaves the flank open. But the flank does not arrive. Remaining defense, by the way, in this case these are the central defenders Thilo Kehrer and Niklas Süle as well as right-back Lukas Klostermann, while left-back David Raum acts more offensively and thus implements Flick’s target for his starting eleven debut.

18th minute: Wow, cool, some spectator (deliberately not gendered based on their own empirical observation) has brought a laser pointer into the stadium and directs its bright green light at Joshua Kimmich, who wants to take a corner. Referee Danny Makkelie then sends a recommendation on how to behave on the sidelines by radio.

Info from the parallel game: Alexandru Mitrita gives Romania the lead after a short corner with a header. One condition for the German World Cup qualification completed today – Armenia does not win – would thus be fulfilled, the second – the DFB team wins – not yet.

45th minute: Timo Werner and the exploitation of opportunities. The video referee stole him from Chelsea 16 (!!!) goals, this time there is no calibrated line, but a stable post in the way. Werner’s shot bounces back into the field and Thomas Müller’s pursuit is blocked. The half-time break is goalless.

50th minute, GOAL FOR GERMANY: Müller and Gnabry together. Müller stops the Macedonians from building up the game by holding his skull in and deflecting the ball to Gnabry. He has the whole field in front of him and sticks his passport right into the interface that Müller is now lurking for. Like in European Championship round of 16 against England he runs freely towards the goalkeeper, but this time not alone, and so he lays past the goalkeeper on the left to Havertz, who slides in casually and safely.

Romania continues to lead 1-0 in the parallel game, so the DFB-Elf – as of now – would be the first team next to hosts Qatar – qualified for the World Cup at the end of 2022.

70.Minute, GOAL FOR GERMANY: Macedonia looks tired and unfocused, the DFB-Elf punishes that. Free kick in midfield quickly executed, substitute Florian Wirtz finds Thomas Müller, who plays artistically in Timo Werner’s run – and he lays the ball with a lot of force into the net.

73rd minute, GOAL FOR GERMANY: The description of the 2-0 is barely finished when Werner hits the 3-0. A cross from the right slips through to the Chelsea attacker, who completes the far corner from the left side of the penalty area with a lot of feeling. And then accepts his replacement with a smile on his face.

76.Minute: Müller resolves a short pass combination in front of the penalty area with a chip pass to Karim Adeyemi, who instead of a joker goal allows Macedonia to follow suit. There was more to it.

83rd minute, GOAL FOR GERMANY: Adeyemi not only stops Macedonia’s development, but also sends Jamal Musiala on the journey afterwards. He stays calm in front of Dimitrievski and scores for the first time for the German national team.

You can find our match report here.

Hansi Flick is the perfect national coach. Says the statistics, because more than five wins in five games are impossible. Of course, there is still room for improvement in the game – key words are defense in the game of change and the exploitation of chances – but the trend is very good. The sometimes lethargic appearances in the last games under Joachim Löw are still very present. Against North Macedonia, the team pushed the next goal even further in the final minutes.

Thomas Müller is once again noticeably important as an offensive organizer, symptomatic of this is the lead: the 32-year-old disrupts the North Macedonian game structure, starts immediately at the interface of the defense and ultimately relies on Kai Havertz unselfishly. It is almost logical that he then also played the last pass before Werner scored 2-0.

It was also good how the young players in the squad are not only used, but also set accents. Florian Wirtz has been in excellent shape for weeks in Leverkusen and today launched Müller’s submission for Werner’s first goal. Jamal Musiala is the second youngest scorer in DFB history, only Marius Hiller on April 3, 1910 was younger – in the same year, by the way, the first person reached one with an airplane Height of more than 1000 meters. Much more important, however: the disastrous and embarrassing appearances of the German national soccer team, as in that legendary first leg against North Macedonia, seem to have been abolished for the time being.

In the first half there was a lack of determination in the goal finish. One of those “small details” that Flick had publicly mentioned in advance as being in need of improvement. In the defensive switching game, like against Romania, some gaps were revealed, which can not only be explained by the fact that Thilo Kehrer moved into the middle for the ailing Antonio Rüdiger and so the defense was changed to three positions compared to Friday. However, this is not a new vulnerability, but one that Flick inherited from its predecessor. One that now has a little more than a year to strengthen before the start of the tournament in the desert state.

Leisure? Rather not. The two remaining qualifying games against Liechtenstein (Thursday, November 11th, 8:45 p.m.) and in Armenia (Sunday, November 14th, 8:45 p.m. / RTL and in the live ticker at ntv.de), given the group win and the secured group Qualifications lose their immediate importance, but they remain important for the big picture. Because Flick has big plans for the DFB selection, as an all-round winner with FC Bayern, he will not want to travel to Qatar for a quarter-final. That that would in turn be more than at the 2018 World Cup (preliminary round) and the 2021 European Championship (round of 16) shows that planning security at an early stage opens up new space to optimize preparation for the final tournament at the end of 2022.