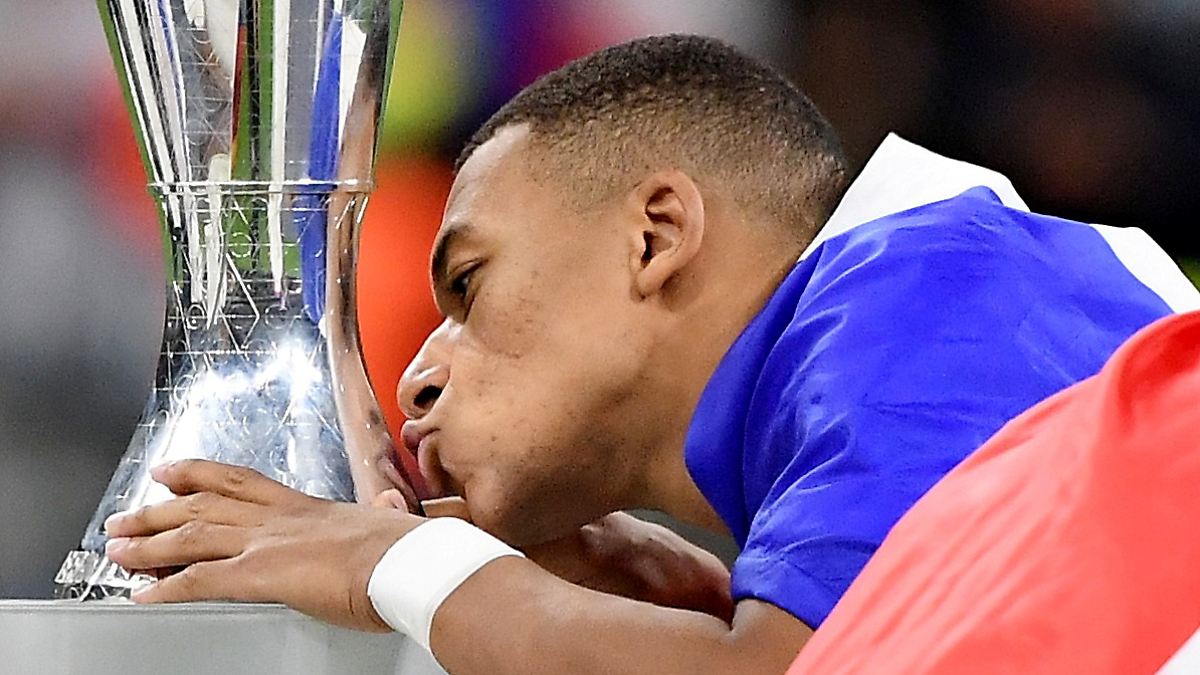 The EM this summer ends with a disaster for France. The team with all its superstars failed in the round of 16 against Switzerland. Now, around three and a half months later, there is still a big title. Kylian Mbappé tells a special story.

That Kylian Mbappé once scored an important goal, a title-bringing one for France, that is the story that was intended for this man. The only thing that was unclear was when it would be told. This fog cleared on Sunday evening. Because the Paris St. Germain striker delivered what was expected of him. In their own country. And probably everywhere else on the European continent. Because even in England, Germany, Italy or Spain you know what this exceptional talent can do.

In the final of the Nations League, yes yes, that actually took place, the fast attacker scored the winning goal against Spain. Owing to the chronicler’s duty, we are also happy to provide the location of the event. He experienced the big moment for his country in the legendary Giuseppe Meazza Stadium in Milan. 31,511 spectators were guests and saw how the 22-year-old appeared free in front of goalkeeper Unai Simon ten minutes before the end, wiggled him with a fine stepover and scored to 2-1. As we later knew, it was the decisive moment. But France still had to tremble a little before the cup could be kissed passionately. Goalkeeper Hugo Lloris snapped two good chances to equalize Spain.

Well, as much as the story of the difference player Mbappé was mapped out, it is also special. Because the star of the billion dollar ensemble from Qatar, pardon, from Paris had a time of doubt in the summer whether it would still make sense to play for the “Equipe Tricolore”. He had just revealed that to “L’Equipe”. “I have always put the French national team above everything and I will always put them above everything. I never wanted to be a problem.” From a certain moment on, he felt that he was being perceived as a problem and that the team would be happier without him. “The message I got was that my ego was making us lose, that I wanted too much space and that without me you might have won.” You know the thing with the ego in Paris too. The provocations about a move to Real Madrid have driven the club to despair in recent months.

Back to the national team. In an apparently constructive dialogue with association president Noël Le Graët, the doubts were then dispelled. And found a way for success. Good for France. Mbappé’s strike partner Karim Benzema was also good for France. He had made it 1: 1 (66th). With a wonderful fluff. It is said of the Real Madrid man that at 33 he is better than ever in his career. That is a considerable accolade. Because he’s been damn good many times in his career. Benzema, knowing that he is in the best shape of his life, is apparently also interested in receiving the award as a world footballer this year. That, says Lionel Messi, but should go to Robert Lewandowski. He is also 33 and also in the shape of his life. For years.

What else is there to tell about this finale, that did not affect so many people on the planet emotionally? Well, Bayern defender Dayot Upamecano did not have such a happy evening. At the 0-1 by Mikel Oryazabal (64th) he let himself be shaken off too easily and when the Real Sociedad San Sebastián striker missed one of the two possibilities to 2-2 shortly before the end, Upamecano had previously misjudged himself and was not doing well . The rest of the story of this game is told very quickly. The first half was really boring, just like studying a woodchip wallpaper, and had nothing to offer – apart from a poor pass of the outstandingly cleared Benzema into the dangerous zone. It got better after the break. Not just because of the three goals. The Spaniards were now playing nice football, which was mainly due to the fascinating Gavi, who is only 17 years old and is still waiting to see what market value will be assigned to him by the stock market sharks on the transfer market. It should be a lush one. But he already has a release clause of 50 million euros in his contract, which runs until 2023, at Barcelona. The Catalan crisis club wants to increase this to 500 million euros as part of a contract extension.

Back to the game: The French also had more good moments now. The spectacle was opened shortly after the break with a slat hammer from Theo. His last name is Hernández and he is Lucas’ brother. He plays in central defense at FC Bayern alongside Upamecano. Sometimes the world is really small. This Theo, he can be called like that, also prepared Mbappé’s winning goal. His offside pass was not offside only because it slipped over a Spanish leg. Anyway, a pass is a pass. And a gate is a gate. Mbappé cleared things up in his own way. So and with that we send the Nations League into the well-deserved winter break. The draw is on December 16. It will continue in June 2022. It’s going to be awesome. Believe us.