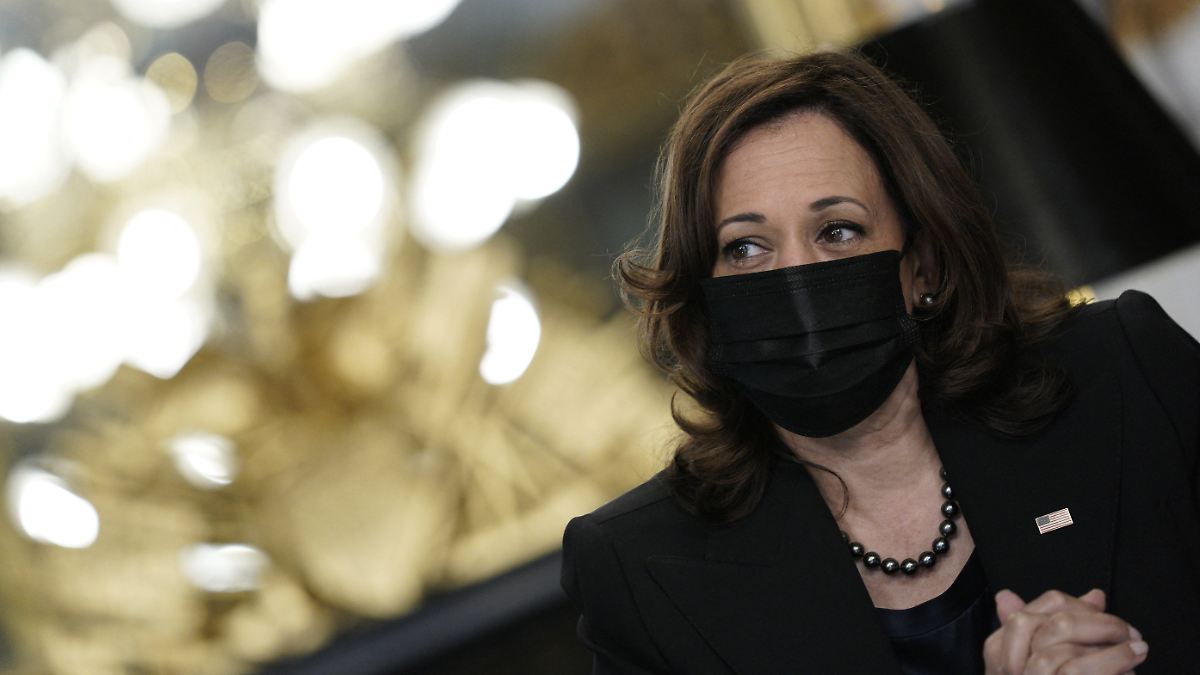 When she took office as US Vice President, Kamala Harris made history twice: She was the first woman and the first black woman to hold office. Many voters put their hopes in her, but so far Harris looks pale and is noticeable by blunders. President Biden could also have his part in this.

Kamala Harris sits in a lavish room in her office building right next to the White House. Chandeliers hang from the ornate ceiling, and behind the US Vice President there is a huge gold-framed mirror on the wall. The Democrat has gathered several cabinet members around the massive table in the middle of the room, other representatives from ministries are connected via video. The occasion is a little less pompous: the meeting of a working group “on organizing and empowering workers”.

Next door in the White House, meanwhile, it’s all about the nitty-gritty. Joe Biden has been fighting for weeks over the core domestic political plans of his presidency: two huge investment packages that are shaking because of opposition from the ranks of the Democrats in Congress. In the end, Biden was hardly occupied with anything else, having conducted important negotiations himself. Harris, on the other hand, played hardly a role in this central effort by the government to the outside world. What kind of runner-up is she for Biden?

Biden has promised to rule as a real team with Harris and to involve them heavily in all big decisions. In the struggle for his domestic political legacy, however, it seems that the 78-year-old is relying primarily on his own experience and contacts. Harris was a senator before becoming vice president. But she only sat in the Senate for four years, while Biden sat for 36 years. His decades in Congress and his foreign policy experience were a big part of the reason why President Barack Obama made Biden his vice-president twelve years ago. Biden brought experience that Obama lacked.

Harris as an important symbol of Biden’s presidency

Harris fulfills a different role for Biden. It serves him to address other parts of the population: younger people, women, blacks, people of Asian origin and those who encounter barriers in life that are alien to a white man. Harris should make his presidency younger, more modern, more diverse. And point to the future. The 56-year-old was frenetically cheered and celebrated as the first woman and first black woman to hold the office of vice president in the United States. The rise of the daughter of immigrants from Jamaica and India is for many a prime example of America’s promise as the land of opportunity – and of the fact that the days in which the highest political offices were reserved for men are over in the USA too.

The tailwind could hardly have been greater for Harris at the start. Some even expected it to steal the show from Biden a little. But that didn’t happen. On the contrary. In the first few weeks of the new administration, Harris hardly appeared at all in terms of content. She was present at many Biden appointments, but mostly only as a participant in the background, quasi as a second for the cameras. In the spring, Biden gave her a big topic of her own: he asked Harris to take care of curbing migration from Central America. Of all things.

Hardly any other topic is discussed as heatedly in the USA as immigration across the border to Mexico. The number of illegal border crossings is at its highest level in a good 20 years. The government is therefore under increasing pressure. And Harris is now the face for the problems. Her team did their best to emphasize that they were responsible for combating the causes of flight, not for the situation on the border. But that went unheard. Then in June Harris traveled to Guatemala and Mexico. The first trip abroad of her tenure did not go well. The message to the migrants (“not coming”) that it announced there drew a lot of criticism from Harris from the left wing of his own party.

US vice is supposed to solve hardly solvable tasks

There was also an unsuccessful television interview during the trip in which she had no answer to the expected question of when she would travel to the border herself, but rather stumbled verbally. The broadcaster CNN reported that this had also caused astonishment in the White House. This was followed by headlines about frustration, communication problems and frosty mood in Harris’ team. Employees threw it down in exasperation. There was also talk of tension between Biden’s and Harris’ teams. Biden’s chief of staff, Ron Klain, felt compelled to say that the president had full confidence in Harris.

Biden finally gave her another topic that does not promise any quick solutions either: the right to vote, which is essentially shaped by the states and is extremely competitive. With the two highly complex topics, did Biden give Harris the chance to distinguish himself on difficult terrain? Or did he use it to maneuver you into a hopeless position? In any case, polls have been going down for Harris since her trip to Central America in June. It was only in the past few days that another mistake followed: During a visit to a university in the state of Virginia, Harris left the accusation of a student that Israel was committing “ethnic genocide” unchanged. That caused irritation.

The series of negative headlines raises questions about Harris’ future. She was actually traded as the natural successor to Biden if Biden – in his early 80s – should not run for a second term. In US history, 15 of the 48 vice presidents to date later became number one in the state: Nine moved up because the president died or resigned. Four were elected to the Oval Office immediately after their runner-up. Two more made it to the presidency years after their vice presidency – one of them Biden. And Harris? In the meantime, there are also doubts in her party as to whether she would be the right choice.