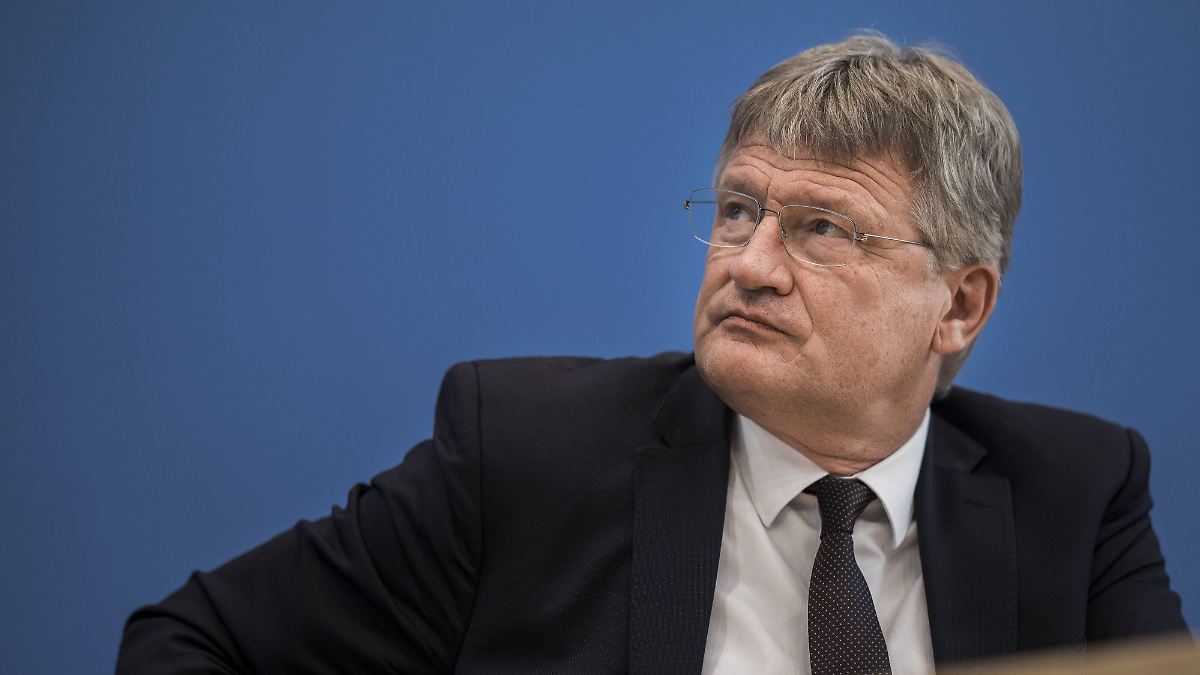 At a chaotic party congress in 2015, Jörg Meuthen rose to become chairman of the AfD. Since then he has tried to make his party capable of governing. But ultimately the 60-year-old fails in the fight against the openly radical forces. It’s defeat in installments.

Step by step, the power structure in the AfD is shifting in the direction of the radical forces. Party leader Jörg Meuthen first sought their proximity and then openly opposed them. Now the 60-year-old gives up. Meuthen wrote to AfD members that he will not run for another term at the federal party conference in December. He was then in office for six and a half years – and made a decisive contribution to shaping the party founded in 2013.

Practically out of nowhere, Meuthen came to the top of the AfD in July 2015 at the chaotic members’ party convention in Essen. When Frauke Petry raised the mood there against party founder Bernd Lucke and drove him out of office, Meuthen was there. The new co-chairman was initially dubbed Petry’s “man in the sidecar”. But the economics professor persistently consolidated his position. In 2016 he made his declaration of war to the “left-red-green silted 68er Germany”, which he repeated many times.

After Petry’s departure, Alexander Gauland joined Meuthen in 2017. At the end of 2019, Tino Chrupalla from Saxony was elected co-party leader. Meuthen himself announced that he wanted to make the AfD “willing and able to govern”.

Worry about the protection of the constitution

In the past year, Meuthen’s ambition was above all one goal: to ward off an observation of the AfD by the protection of the constitution. In March, the Federal Office classified the AfD “wing” as “secured right-wing extremist”. Meuthen then pleaded for its split from the party. At the instigation of the party leader, the AfD federal executive declared the party membership of the “wing” chief strategist Andreas Kalbitz null and void – the fronts between the party camps continued to harden.

At the end of 2020, Meuthen settled accounts with right-wing provocateurs in the AfD at a party congress in Kalkar – his angry speech aimed, among other things, at the fact that right-wing Youtubers came to the Bundestag building at the invitation of AfD members and harassed parliamentarians.

At the Dresden party congress in April 2021, the shift to the right in the AfD could no longer be overlooked. The Thuringian right winger Björn Höcke, who otherwise preferred to hang around in the background, demonstratively looked for the limelight and brought the hall behind him. The party congress passed a corona resolution in the style of the “lateral thinker” movement and included the demand for Germany to leave the EU in the election manifesto – despite Meuthen’s urgent warning.

First steps at the Junge Union

Meuthen was also unable to score points with the team he favored in the free choice of the top duo for the federal election: The members decided on parliamentary group leader Alice Weidel and co-party leader Chrupalla. In August, Meuthen then failed in the party executive committee to initiate a party expulsion process against NRW state vice Matthias Helferich because of Nazi settlements.

Meuthen joined the AfD after the 2013 federal election. Until then, he was not politically determined. Growing up in a working-class district of Essen, he founded a local association of the Junge Union as a youth in Rhineland-Palatinate, where the family had moved. The shrewd speaker studied politics, journalism and economics. He wrote his doctoral thesis on the church tax.

In the SPD-led Hessian Ministry of Finance, Meuthen was a consultant in the budget department. In 1996 he came to the University of Public Administration in Kehl in Baden-Württemberg as a professor of economics, his professorship is suspended. As head of the state of Baden-Württemberg, he led the AfD to the Stuttgart state parliament in 2016. He gave up the chairmanship there when he moved to the European Parliament at the end of 2017.

The third-time married father of five children was long considered a bourgeois-liberal figurehead of the AfD. But he was unable to put the völkisch-national “wing” in its place. When he was re-elected as party leader at the end of 2019, Meuthen announced what he was now implementing: He would “not give up his face to a party that is creeping into right-wing extremist positions”.