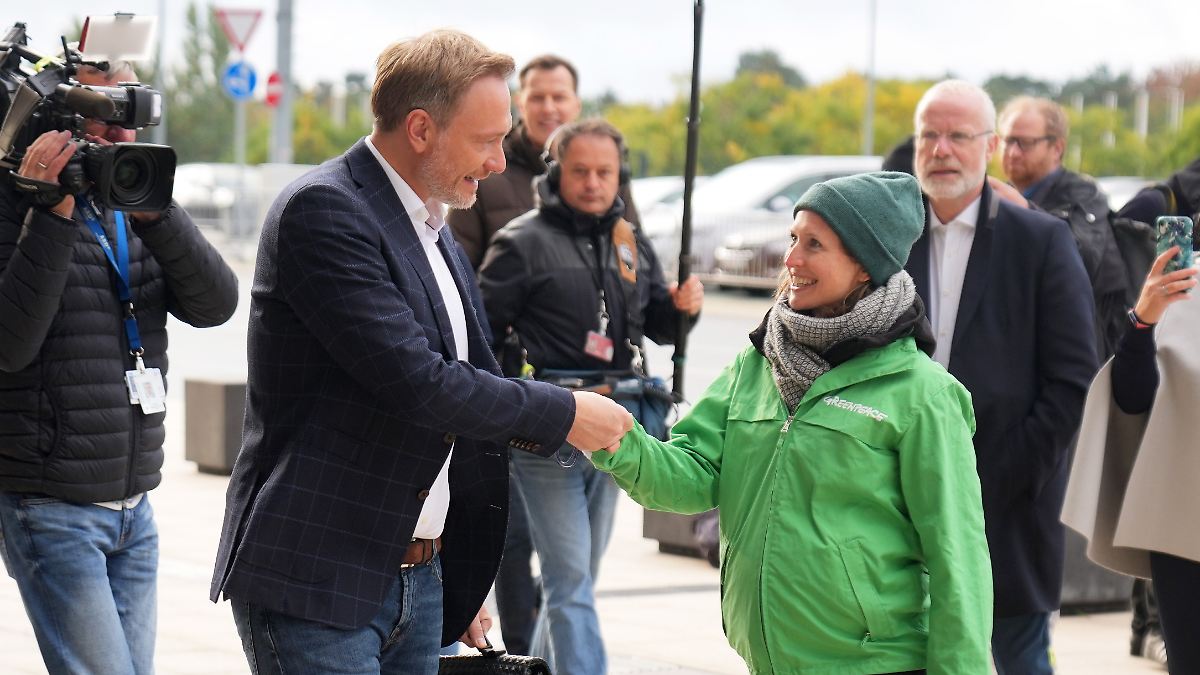 Some traffic light negotiators seem to be making fun of not saying anything now. Since Chancellor candidate Olaf Scholz is flying to the USA, the negotiations will end earlier today than yesterday.

The heads of the SPD, Greens and FDP want to make a joint press statement after today’s exploratory talks. The date has been announced for 1.30 p.m., negotiations are still ongoing at the moment.

The discussions form the second day of the actual explorations. They have to end at noon because SPD Chancellor candidate Olaf Scholz, in his capacity as Federal Finance Minister, is flying to Washington to attend the meeting of G20 finance ministers. On Wednesday, the general secretaries of the SPD, Greens and FDP will speak to each other in a small group. On Friday, Scholz will return from the USA, then a third exploratory round will take place.

In terms of content, little or nothing has leaked out of the discussions so far; the confidentiality agreed between the parties works. On the one hand, this silence is intended to create a protected space in which one can speak openly – that is a central lesson from the Jamaica explorations in 2017, when interim results were constantly being made public. At the same time, by actually keeping this agreement, the parties show that they mean business.

As in previous meetings, Greenpeace activists are standing in front of the exhibition center in the morning, where the SPD, Greens and FDP are talking to each other. On this day they distribute “renewable energy” to the negotiators. FDP parliamentary director Marco Buschmann rejects the bolt, “others need it more urgently, thank you”.

Not much more is to be learned in the morning – some negotiators seem to be joking about not saying anything. When SPD General Secretary Lars Klingbeil hurried into the exhibition hall on Tuesday morning, he was greeted by a journalist: “Good morning, Mr. Klingbeil, what’s the mood?” His answer: “Fine with me, thank you.” Scholz responds to the same question with a wave, Green leader Annalena Baerbock refers to her Greenpeace bar and says: “Now I have a chocolate bar, good.” FDP chairman Christian Lindner was asked this question twice on the way into the building, both times he replied: “Difficult.” What is difficult, why it is difficult and whether he still hopes that the probes will end successfully – that is not found out.

Some media representatives have stopped asking questions. “Mr. Wissing, you are so alone!” Shouts one of the FDP General Secretary Volker Wissing, who had come in line with Lindner, Baerbock and Green Co-chief Robert Habeck on Monday for the ten-hour start of the explorations. Baden-Württemberg’s Green Prime Minister Winfried Kretschmann is a bit more talkative. When asked whether he was looking forward to the negotiations, he said to a ZDF reporter: “Whether negotiations are now something joyful, we will leave that open.” There are still three issues pending. Which are they? “I should look now.” Then he goes.