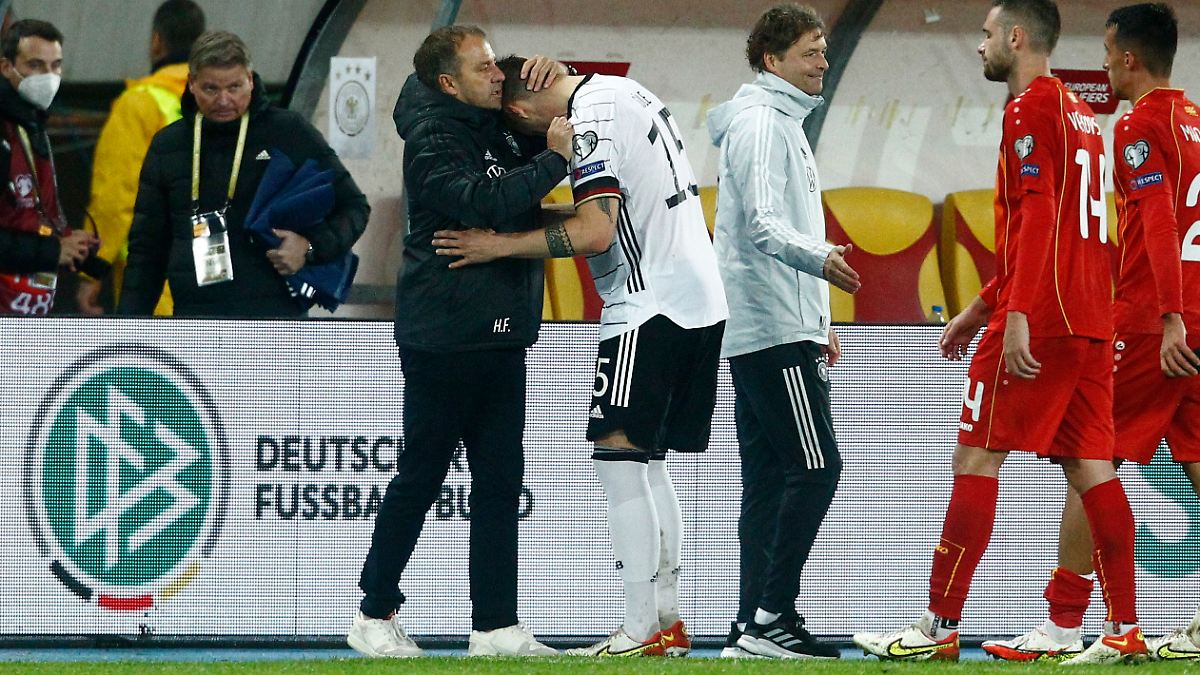 First! This is the German national soccer team. Not (yet) at the World Cup, but on the way there. As the first team in the world, coach Hansi Flick’s eleven qualified. And now it’s only going up – right? Well, not everything is perfect. Like his predecessor Joachim Löw, Flick started his term of office with a record of five wins, a world class opponent was with all due respect for Liechtenstein (2: 0), Armenia (6: 0), Iceland (4: 0), Romania (2: 1) and North Macedonia (4: 0) not included. Almost 13 months remain until the opening game on November 21, 2022, with captain Manuel Neuer confidently choosing the title as the goal. It will be played on December 18th, on the fourth Advent, six days before Christmas Eve. Brave new world of football. What has to happen for the German team to be in the last game of this tournament?

Jérôme Boateng and Mats Hummels. What kind of a world championship inside defender duo was that? Plus Per Mertesacker, and Benedikt Höwedes was also there. Even Philipp Lahm suddenly defended the rear again. The defense of the 2014 World Cup remains the benchmark in German football to this day. But the times are long gone. Manuel Neuer is still in goal, and who doubts that he will be carried out of goal at some point, but otherwise times have changed. Lahm and Mertesacker don’t play anymore, Boateng has maneuvered himself out of bounds and Hummels hasn’t gotten any younger. He still plays a good role at BVB, but is increasingly struggling with injuries, and his future in the national team is still open.

Defense is the number one construction site. Who is defending inside? Who is playing outside and how? At the moment, Antonio Rüdiger and Niklas Süle are ahead at the head office. The Bayern defender in particular is in excellent shape. After his problems in recent years, he is literally blossoming, has the business under control and is once again reaching the promise that he once was: a game-shaping, gigantic central defender who simply shuts down and won’t let anyone pass him. But beware! Süle is playing for a new contract. He also has to prove consistency afterwards, as does Antonio Rüdiger, who struggled for a long time. At the club, at Chelsea, and in the national team.

Like Süle, Rüdiger is also playing for a new contract and Matthias Ginter is also playing for a new contract. Someone who is always there somehow, but who has never taken the next big step. He was ousted in the national team, at least for a short time, by Thilo Kehrer, who is also one of those who delivers solid, but not extraordinary, performance. It remains problematic, the world class falls on the position and there is a lack of a well-rehearsed duo that can deliver the pass paths and defend forward without forgetting the protection. What is important. Because Flick’s system is not the reinvention of football, but is designed for high pressing, as the cast on the outside positions shows:

Flick sees things there in a very pragmatic way. One full-back should be higher than the other. That can differ from game to game, as has already been seen in the previous meetings. Right-back Jonas Hofmann, who plays a completely different role in the club, is very high and Leipzig’s Lukas Klostermann will protect the side in the next game, while on the left side, 23-year-old David Raum is supposed to conjure up the offensive. Flick takes a risk. Consciously. So far it has not turned out to be his undoing. Not when North Macedonia played in the spaces behind the room and not when Hofmann revealed a speed deficit in reverse gear, which will no longer be so easy to conceal against fast wingers.

In terms of personnel, Flick definitely has opportunities in the positions. Robin Gosens enchanted an entire country against Portugal, but feels more comfortable in a back three. Still, Flick’s approach should suit him. The space already mentioned will take time. Kehrer is the defensive protection.

Ridle Baku, who was not taken into account after an appearance under the new coach, and Hofmann offer themselves as an offensive solution on the right side. The inconspicuous Klostermann and defensive playmaker Süle can protect. Dortmund’s Emre Can, another all-rounder like Kehrer, can do that too. However, he would have to stay fit. In any case, Joshua Kimmich is no longer up for election. Although: when the going gets tough, Hansi Flick can rely on him there too. We all remember who played as right-back in Bayern’s 1-0 Champions League final and shone as a preparer from there. Unlike the aforementioned players, the Bayern star has an invaluable advantage: He can also control the game from there. Is it possibly not needed at all in midfield?

If you have Joshua Kimmich in the center, you shouldn’t have any problems. This reading has prevailed. Both at FC Bayern and in the national team. The driver is considered a key player in both teams. And he regularly shows that the assessment is correct. Kimmich always gives his team something that nobody else offers in the overall package. He works aggressively against the ball, is confident on the ball even under pressure and has an excellent opening.

His chip passes to the top have become a real stylistic device of the offensive game in both teams. But Kimmich also has a problem. Sometimes he overheats and wants to force things. After the arduous win against Romania, he confessed that the team wanted to equalize very quickly. The only reason why this risky venture was not punished was that the opponent’s counterattacks were not played off well. As the boss at the center, he has to develop an even better feeling for the needs of the team.

This is a lawsuit at the highest level. But a six at the highest level has to be able to do that. And because there is no substitute for Kimmich, this task weighs on him. His neighbor Leon Goretzka, with whom he forms an impressive and dynamic power center, is also not the type who is good for defensive protection. It is more “eight” than “six”, so it means that it is always forward-looking. There he has outstanding qualities with his deep runs and his urge into the dangerous zones.

This is not the case for Germany either. That is the second problem that the national coach has to deal with. A long loss of service providers would not be able to compensate. İlkay Gündoğan would be an option, but feels more comfortable as a classic “eight” than as a pierced “six” like Goretzka. And Florian Neuhaus, who has so much potential, is currently desperately looking for the form that made him interesting for FC Bayern and Borussia Dortmund.

All the other top quality people who are assigned to the midfield are also more likely to be in the front row. The “tens” position is particularly competitive. In addition to Niklas Süle (just kidding), among others, Marco Reus, Thomas Müller, Florian Wirtz and Kai Havertz, where the man from Chelsea FC said that he can also imagine the role as a central striker very well (see below) . For Flick, these are good options because they are very different. But also difficult decisions.

Because especially Reus and Müller are indispensable with their qualities in dribbling and graduation as well as communication and spatial interpretation. And just as Wirtz is currently leading the game, scoring goals and preparing for Bayer Leverkusen, he will be a man with the X-factor in Qatar. Jamal Musiala also has it in him. The flexible super talent with the potential of a new world Matthew. But he will rather switch to the wings. The situation there is deeply relaxed when Serge Gnabry stays healthy and Leroy Sané does not fail again because of his own claims and loses confidence in himself.

Well, nobody can say that the German strikers are not doing their jobs properly. After all, Timo Werner has scored five goals in five games since Hansi Flick’s national coach, and recently scored twice against North Macedonia. And should have actually silenced his critics who accuse him of being a chance death. In 47 international matches, the Champions League winners of Chelsea FC scored 21 goals and four assists. Serge Gnabry has even better statistics: 31 games, 20 goals and six assists. Five goals from the already successful World Cup qualification go to the account of the 26-year-old who acts more often as a right winger than as a center forward.

Outside is also the position that Leroy Sané prefers to play, left winger mostly. As a ninth, he was used twice at the European Championships, but could not convince. Just as it was just generally not convincing for a long time. That is over, Bayern coach Julian Nagelsmann apparently flipped the decisive switch. Now he whirls strongly through the opposing defenders – with Flick and mostly with Nagelsmann from the left wing. Two goals and an assist are his result in the DFB-Elf since the beginning of September against Liechtenstein.

Kai Havertz has made claims to want to act in the German striker, competes against Werner. Where he is used by Thomas Tuchel at Chelsea FC – and also by Flick, at least temporarily. Against North Macedonia he tactically ran as a left winger, from the left he also scored the opening goal. And then there is also Thomas Müller. Offensive universal weapon, always where it is needed. Always good. The DFB team scored 18 goals in the five games under Flick, conceding only one, a statistic that can be seen despite the opponents, none of whom are among the best in the world.

And yet it is a dilemma. In the Bundesliga, Robert Lewandowski and Erling Haaland are two world-class strikers. Lewandowski even won the Golden Boot as the best striker in Europe last season, while Haaland was awarded the Golden Boy as the best young player in 2019. And this season, the strikers from FC Bayern and Borussia Dortmund have again presented themselves powerfully. Both have scored seven times in the Bundesliga, and Haaland only needed five games. But as much as the two football Germanys are enthusiastic about the league – they cannot help German football.

The Pole and the Norwegian naturally play for their national teams. And don’t get us wrong, we still want to change something about that. But the two would look good on any nation. And maybe still missing from the World Cup in Qatar. Because both the Norwegians and the Poles are in danger of missing out on qualifying. At least the detour via the playoffs seems obsolete. The Netherlands are also not yet firmly through in the group with Norway, as the nine goals in eight qualifying games by Memphis Depay – qualifying best value – have not yet made the breakthrough easier.

Italy, France, Spain, Belgium and England do not have these problems. All of these top European teams lead their qualifying groups. And all of these top teams have at least one striker of international level in their squad: Karim Benzema and Kylian Mbappé play for France, Alvaro Morata and Ferran Torres meet for Spain, Belgium has the strikers Romelu Lukaku and Michy Batshuay, England can rely on Harry Kane and Raheem Sterling for example.

Incidentally, the best German in the Bundesliga goalscorer list is someone who has not yet scored in the national team: Florian Wirtz. At Bayer Leverkusen, the 18-year-old is completely enthusiastic in attacking midfield – with a strong urge to score. He has already scored four goals in six games. Thanks to his five assists, he even ranks second in the list of top scorers between Haaland and Lewandowski. So far, he has only made four short appearances in the national team, in which he has already contributed two assists. A player for the future, definitely. At the World Cup, however, one will more likely speak of the Benzemas and Ferran Torres.