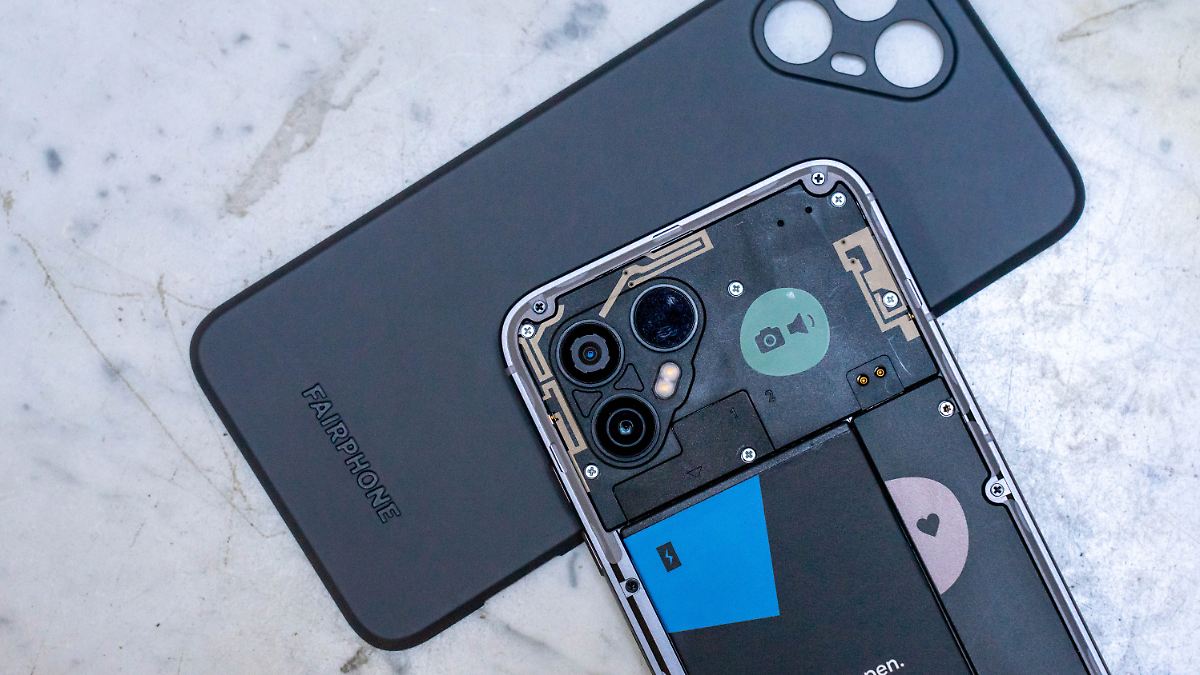 The fourth generation of the Fairphone is the first that can satisfy even more demanding users. If you really want to make a contribution to the environment and better working conditions when buying a smartphone, you only have to make minor compromises.

This will come on October 25th Fairphone 4 in the trade. It is the first smartphone for which no additional electronic waste should be created. In addition, the Dutch manufacturer has used as much recycled material as possible or, as far as is currently possible, ensures that people and the environment are treated fairly and carefully when extracting the raw materials. The same goes for production. And very important: the devices have to be durable.

For a clear conscience, buyers in the past had to live with the fact that the devices could neither technically nor visually keep up with normal smartphones. The Fairphone 4 should be different, users should only have to make minor compromises. ntv.de has tried out whether that is the case.

Here you can see all interchangeable components.

The Fairphone 4 still doesn’t look like a current 1000-euro luxury smartphone, but the design is impressive. This is especially true when you consider that the device has a modular structure: you can not only change the battery, but also the cameras, display and five other components yourself.

Fairphone includes a screwdriver for this. You don’t need any more tools – there is only one screw size, nothing is glued. Strong: Despite the modular design, the Fairphone 4 is protected against dust and splash water in accordance with IP54.

So one can benevolently overlook the thicker bezels around the screen and acknowledge that the Fairphone 4 has a good 6.7-inch LCD. It offers a very sharp pixel density of 410 ppi, displays colors naturally, has quite strong contrasts and can shine brightly. The fact that the refresh rate is not faster than 60 Hertz (Hz) is a small downer. But it is only noticeable if you have looked at a 90 or 120 Hertz display beforehand, and the iPhone 13 does not have a faster screen either.

The LCD is impressive.

The removable back is made of 100 percent recycled polycarbonate. This is not only more stable than the glass that is often used, but also feels more pleasant thanks to a rubberized surface and is the opposite of slippery. The aluminum frame is slightly bulky, which looks good on the device. At 162 x 75.5 x 10.5 millimeters and 225 grams, it is not a slim lightweight, but it sits comfortably in the hand.

The inner workings should be strong enough to be able to keep up two years from now. With Qualcomm’s good mid-range Snapdragon 750G chip, the Fairphone has enough power and is 5G-capable. The processor is available with either 6 or 8 gigabytes (GB). The test version with 6 GB showed consistently smooth performance. The flash memory is 128 or 256 GB and can be expanded with microSD cards.

At 3905 mAh, the battery does not have a particularly large capacity. According to Fairphone, particular attention was paid to ensuring that the quality was right. In addition, a replaceable battery takes up a lot of space, a larger battery would have made the device too fat. In the test, the device performed well during the day with moderate use. You can also take a second battery with you; the replacement battery costs 30 euros.

A five-year guarantee is a challenge

There is only one type of screw in the Fairphone 4.

In addition to the SD card slot, the SIM card slot is located inside the Fairphone 4. You can also use eSIMS, which also makes the device future-proof. The manufacturer gives a five-year guarantee. Further updates could follow after Android 12 and Android 13, security updates should be available for five years if possible, even if only the first two monthly.

The question will be whether the chip is still good enough. Because that is a critical component that cannot (yet) be replaced on the Fairphone. Chip manufacturer Snapdragon may also have to play along with driver updates.

The device has a wide-angle and an ultra-wide-angle camera as well as an infrared sensor for depth measurement.

A long life does not have to fail with the cameras, because you can change them. For now, this is not necessary, because the equipment is not bad. On the back, the Fairphone 4 has an optically stabilized main camera with 48 megapixels (MP) and an aperture of f / 1.6 and a 48 MP ultra-wide-angle camera with an aperture of f / 2.2. There is also an infrared sensor for depth measurement. The front camera has a resolution of 25 MP and is HDR-capable.

Wide- and ultra-wide-angle cameras take beautiful pictures with natural colors, strong contrasts and lots of details in daylight. The autofocus usually works very quickly and accurately. However, you can only switch the main camera to 48 MP, otherwise four pixels are combined into one ultra-pixel to increase the light intensity. The “super night mode” also only works with the wide-angle camera. However, this is then also able to deliver quite appealing results in the dark

The Fairphone only shoots videos with the main camera. 4K recordings are possible at 30 frames per second (fps), in Full HD and HD 60 fps. The results are absolutely impressive in good light, but you shouldn’t hope for film art in the dark.

Almost all smartphones used to have easily replaceable batteries.

A final judgment of the camera performance is not yet possible. As is often the case, Fairphone is still working on the software until the end, and an update should follow at or shortly after the market launch.

Even without a final camera rating, you can say that the Fairphone 4 absolutely passed the everyday test. It doesn’t offer any special refinements or extras, but you don’t really miss them either. The model with 6 GB of RAM and 128 GB of flash memory costs around 580 euros, the version with 8 and 256 GB 650 euros. This means that the prices are not that far removed from similarly equipped, conventionally manufactured mid-range smartphones. They will never be as durable as the Fairphone 4.

A new smartphone every year is insane

According to “Environment values“In Germany, six out of ten private smartphones are no more than a year old. 57 million Germans use a smartphone, but have significantly more devices. The” Deutsche Umwelthilfe “estimates that 206 million mobile phones are in drawers German raw materials agency they contain around 3.4 tons of gold, 1300 tons of copper and 380 kilograms of palladium – without the raw materials in the batteries.

The consumption of resources in production is immense. In total, a smartphone consists of 40 to 60 different raw materials, around a quarter of which are metals. “Floodlights“has determined that the raw materials used for a smartphone weigh 86 kg. Only 2 percent of them end up in the device, the rest is waste. In addition, a lot of chemicals are used in production, the disposal of which is extremely harmful to the environment. And according to the Ökoinstitut The manufacture of a smartphone produces around 100 kg of carbon dioxide.

Recycling is not the solution anymore

When the raw materials are extracted, consideration is given to the environment even less often than in the production of smartphones. Forests are being cleared, bodies of water contaminated, the air polluted. When it comes to extraction, people are often only considered resources to be exploited. Child labor is not uncommon, starvation wages are more the rule than the exception.

Recycling can do little to change the catastrophic balance sheet, only just under 15 percent of raw materials are currently being recovered. Especially in the case of rare earths, the extraction of which often has particularly dramatic consequences for the environment and people, recycling is too time-consuming and therefore too cost-intensive.