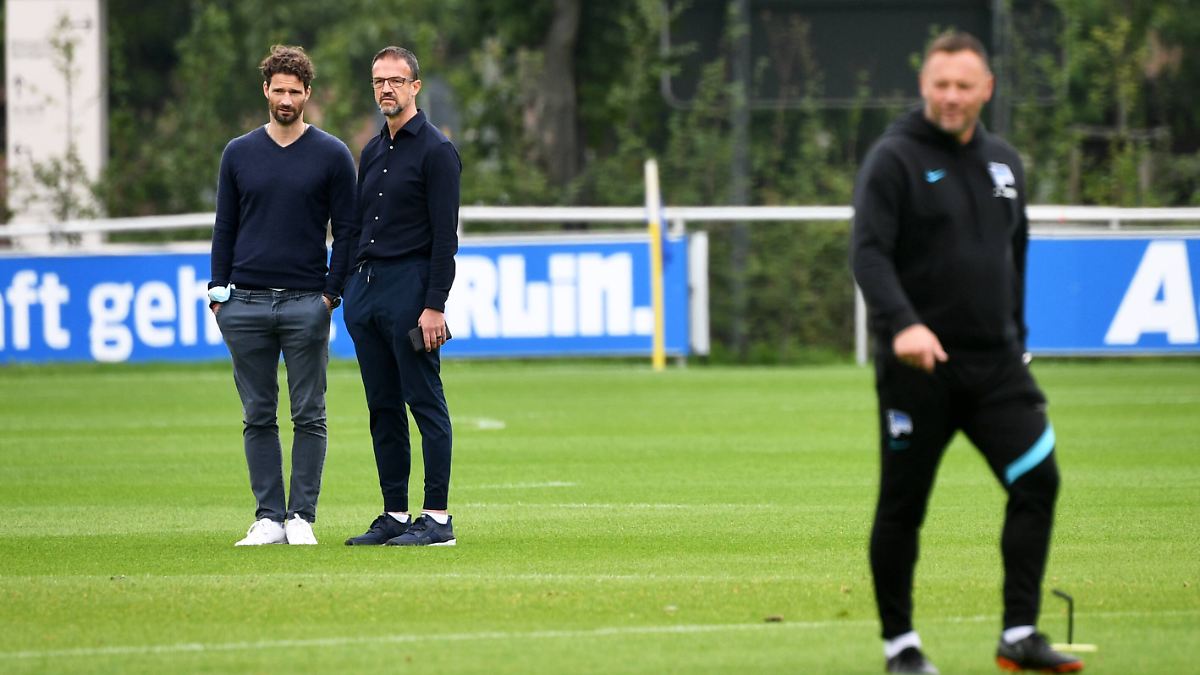 Hertha BSC does not come to rest. It’s not sporty, the mood between coach and manager is tense, the investor wants to see success for his millions and now the CEO is leaving the club as well. The Bundesliga soccer team has to find a future – and success – quickly.

It won’t be easy for Hertha BSC this weekend. The Bundesliga soccer team has to compete in Frankfurt, with the champions-winner Eintracht Frankfurt. The only club that has managed to beat FC Bayern so far this season. For the table-14. a tough job. Another tough job besides so many plaguing the club.

Coach Pal Dardai’s team has a special fan. One who knows the club better than few others: Carsten Schmidt. Until Tuesday CEO of the association. Now, for private reasons, only one fan. “I will keep the excitement for the club, just like I did from day one. It grabbed me and won’t let go,” promises the 58-year-old visibly touched at his last press conference for the club.

Schmidt has to give up his office.

He neither goes voluntarily, nor does Hertha voluntarily let him go. A “serious illness in the immediate family environment” prompted him to take this step, according to a statement from the association on Tuesday afternoon. One day later he explains: “I will now completely withdraw into my private environment, that needs all my attention. It is a situation that I cannot manage on the side.” And gives an insight: “I’m feeling bad. The weeks and months have gnawed at me. It was a difficult year. We didn’t have the best year for Hertha BSC both professionally and it was probably one of the worst privately.” Werner Gegenbauer said goodbye to him with regret, but no other solution could be found, says the President. Schmidt’s tasks are now taken over by the two managing directors, Fredi Bobic for the sporting area, Ingo Schiller for the finance department.

Schmidt was employed at Hertha for just ten months and, after a casting, filled the newly created position of CEO, which is now vacant again. Gegenbauer does not want to decide whether he will be occupied again or whether the existing management will continue to run the club. “Quick shots” are not appropriate. First of all, the “management is well positioned,” said Gegenbauer. And Schmidt also says: “I’m not worried that it will end in a vacuum.”

And yet Schmidts Aus is the next small trouble spot in the troubled club. Since 2019 – when Dardai was still a coach and the club ended the season in the unsatisfactory but safe eleventh place – things have been extremely turbulent. Dardai leaves that summer, with Ante Covic another club veteran takes over the coaching post. In June, Lars Windhorst joins as an investor and tries, with his millions and his brisk statements – “Big City Club” – to put the old, graying lady in a glittery costume. He gets Jürgen Klinsmann, who is actually supposed to take over his position on the supervisory board, but is then installed as a trainer due to sporting failure. Klinsmann squandered the investor’s millions on transfers in the winter, but is not very successful, goes with a bang and the publication of his remarkable diaries.

Then the corona pandemic breaks out, and Alexander Nouri has now been promoted from Klinsmann’s assistant to head coach. The world stands still, but with far-reaching exceptions for the football professionals, it goes on. Not long for Nouri, who will be discontinued and replaced by Bruno Labbadia in April. Salomon Kalou apparently does not take the fact that football is allowed to run, but with some strict conditions such as keeping its distance, so seriously. A video from the cabin records the violations. Trifles, it is said by many, with others it looks the same, only they are – to put it mildly – not so stupid to show it. The club sets an example, Kalou has to leave the club. We only got there in May 2020. Hertha BSC ended the season in 14th place under coach Bruno Labbadia – it sounds more confident than it was, relegation was just prevented again.

In September it is announced that Carsten Schmidt will take over as CEO on December 1st. In January 2021, both Labbadia and the long-time managing director of Sport, Michael Preetz, have to leave. The hope for a little more calm in the club is great when it was announced in April that Fredi Bobic will take over the position of Managing Director Sport in June. An old friend of the club, someone who successfully managed Eintracht Frankfurt. And then Dardai returns – the two once played together. A good duo, then, so the hope.

Hope fades quickly, the season does not start, Hertha is already far behind the sporting expectations. Transfers were sparse, but the club received 375 million euros from investor Windhorst. Millions for whom he had hoped for more say and more influence. Gegenbauer, on the other hand, cites 50 + 1, Windhorst can hold the majority of the shares, but not the majority of the votes.

A somewhat disillusioned Windhorst recently told the RBB: “I expected that you would work more constructively and positively on projects and topics as a team, exchange ideas and really develop the club with joy, creativity and dynamism and take it to a new level it hasn’t really worked out so far. ” His talk about the Champions League, his dream of the “Big City Club”, Windhorst, which delivers the millions but is not allowed to determine anything, contributes to the fact that the discrepancy between demands and reality at Hertha is increasing. That there is also talk of a chaos club.

A view that the outgoing CEO does not want to endorse: “I was really excited who we were called the Chaos Club. Chaos is a disordered bunch that doesn’t know what it’s doing,” says Schmidt when he said goodbye: “That’s with Hertha BSC has never been the case from my point of view in my time. ” Gegenbauer becomes even clearer: Chaos Club? I can really only laugh myself to death. ”

Inside view and outside effect differ from each other. There was never any resistance to initiatives that he initiated, said Schmidt. “There is no rift, there was no rift, there will be no rift between the parties involved.” With the strategy project “Goldelse”, Hertha has found itself under his leadership, the findings must now be implemented. Without the 58-year-old, who regrets it very much. “It’s stressful and sad for me because I can’t finish something. Anyone who knows me a little knows that it means a lot to me.”

As CEO, Schmidt should be primarily responsible for the better sporting future of Hertha BSC. Now the management has to restructure itself again, there is restlessness again. Restlessness in business in addition to restlessness in sports. The successes are missing, after seven match days there are five defeats. And unrest also on the sidelines, where Dardai and Bobic – the supposedly good duo – squabble. Hertha’s coach said after the 5-0 draw against FC Bayern: “I’m not hanging on to my seat, I’m helping out. Hertha BSC has probably been looking for a great coach for a long time. Pal is a small, nice coach.” Bobic didn’t like it at all, there was a one-on-one conversation. Bobic then said to the “kicker”: “I told him personally and I am now also saying it publicly: It is up to Pal Dardai himself how long he has been a coach. Ultimately, it is always the work that someone does.” A final clarification sounds different.

14th place does not mean that peace will return. The squad is made up of very good players, but real stars are missing. The grumbling during the summer break was great, many had hoped for more and better transfers from Bobic. After all, he managed to put together a top team at Frankfurt and at Hertha he has a lot more financial background, because no one has ever invested more in a Bundesliga club than Windhorst. But a third of the money is planned in the liabilities, according to RBB. The scope for Bobic was probably not as big as expected.

Schmidt leaves the club with a heavy heart: “I’ve found a really great club culture.” Hertha loses a link between the club and the investor. Someone who shares Windhorst’s ambitious plans. In March Schmidt told the “Horizont”: “We have a traditional club that is willing to change and with financial resources that Hertha BSC has never known before.” And explains: “This will become a story: We want to initiate the biggest catch-up race that German and perhaps international football has ever experienced and lead it to success. Whoever goes the way with us now and counts on Hertha BSC, will Part of this success story. ” Windhorst tweeted on Tuesday about Schmidt’s farewell: “I deeply regret his departure from Hertha BSC. He had big plans, as I know …”

So far, the plans are big and the results sobering. Even without Schmidt, Gegenbauer is concerned with precisely these results. “When they are not there, it is sometimes good to change something.” Whether “new or old” is not always the decisive question, he assesses “between good and not so good”. For the sporting assessment, the club now has the first chance at the game in Frankfurt after the international break. Bobic, who has now become even more important to the club, is returning to his previous employer, the team desperately needs a win. And Carsten Schmidt keeps her fingers crossed for him. “I will watch every game,” he said when he said goodbye. Despite all the talk about the club, he doesn’t regret a single day. “The fact that I was allowed to serve this club is something special.”