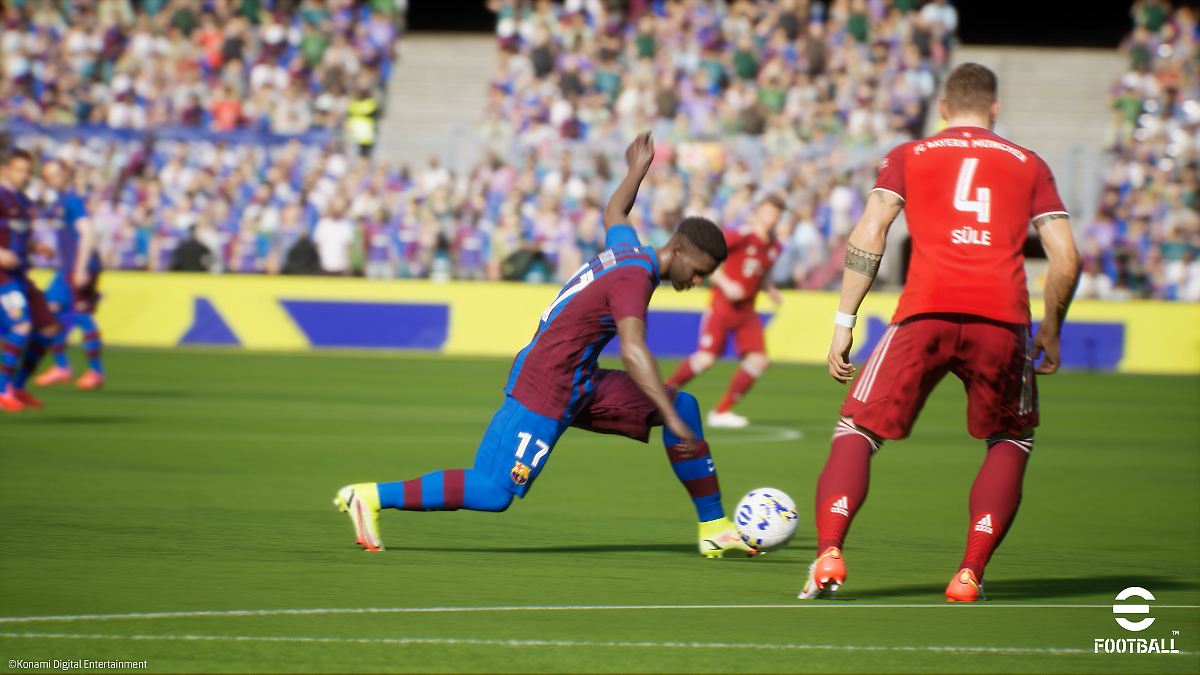 FIFA or Pro Evolution Soccer? In the virtual world of football, this is a question of faith. The latter title now has a successor and a new name. “eFootball 2022”, apart from the new paintwork, cannot keep up with the competition – for several reasons.

The approach is praiseworthy: a football simulation that is available for free download, for the time being dispensed with microtransactions and focuses on the gameplay. Konami wants better all of the things that Electronic Arts’ FIFA series players tend to complain about. What the developers have set up with the “Pro Evolution Soccer” successor “eFootball 2022” is, figuratively speaking, the one hundred percent big chance that has been missed. Neither the concept nor the gameplay is the title on the amount of time – even with ancient PES titles the latest edition cannot keep up.

The corona-related year break and the switch to the Unreal graphics engine did not do the game series any good. Even if EA’s annual sports titles tend to take baby steps in their development, the development of “eFootball 2022” is a giant step backwards. It’s really hard to develop fun playing this game. There are dozens of reasons for this.

There are only two different modes: one online and the other offline. In training mode against the CPU, the player selects one of nine teams with which Konami has concluded exclusive license agreements. These include top clubs such as Bayern Munich, AS Roma and Juventus Turin. But that was it in terms of scope: there are no more teams. In addition, only two levels of difficulty out of six possible can be selected – the others seem to have not yet been programmed. Overall, this has more of the character of a demo version.

At first glance, everything looks pretty good with “eFootball 2022” – but appearances are deceptive.

The event mode is available online. The selection of teams here grows to more than 200, but with one serious limitation: It is not possible to experiment with teams. Once you have selected a team, you have to play with it for the duration of the event – the first lasts ten days. In addition, a number of connection errors are annoying, which often pop up randomly during the game.

The truth is on the field and that’s where “eFootball 2022” fails entirely. That has nothing to do with the games of the ProEvo series that the virtual Lewandowskis and Co. put on the green. The game is ultra-slow. A quick short passing game seems lengthy and slows down the pace. Sprints with or without a ball are quick, but the next problem is already lurking here: the movements and the course of the game are not fluid. When changing direction, the kickers appear stiff on the lawn, if you let go of the sprint button, the movement stops abruptly. There is no realistic run-out movement. Those who rely on their AI-controlled teammates are lost, because they hardly react to the ball if it ever crosses their reaction radius.

If the players cross paths, which is a common occurrence in football, it becomes chaotic as well. The animations when raking and shoving in the fight for the ball do not work well together. Collisions seem exaggerated. The – to put it mildly – ridiculous interpretation of the rules by the referees comes on top of that.

Graphically there is at least one highlight, followed by many low lights. The stadiums look amazing in eFootball – at least those of the nine partner clubs. However, these are filled with a hopping mass of 08/15 soccer fans from the clone laboratory. If you look too closely, you will be hopped into a trance.

Cheers from CR7 – with big cheeks a “Simmmm”

You shouldn’t look too closely at the players’ faces if they are celebrating a goal. Because this is where glitch rules. Deformed with their mouths wide open, the virtual kickers cause laughter, but in view of the technology with motion capture, the finish is only tragically funny.

The first revision of the game is announced for October 28th, which should fix all problems. It is uncertain that updates and patches will quickly bring the necessary improvements, since the gameplay is a single construction site. Because football is only poorly simulated in “eFootball 2022”. In addition, a form of microtransactions should find its way into the game with the “Creative Team” mode. In-game purchases can already be made with a package for 39 euros. However, the mode does not yet have a release date.

What is much more difficult for Konami than to have released an unfinished game that may still get the curve with numerous updates and patches, is the first very negative impression. Players who have longed for a FIFA alternative have very likely been alienated. Perhaps also the exclusive license partners, who decorate a game that is not suitable for e-sports with their stadiums, coats of arms and player faces, “eFootball 2022” is certainly not a figurehead for these clubs. The free-to-play title naturally has one advantage: Anyone can try it out for free, even if the gaming experience is unlikely to be fondly remembered.