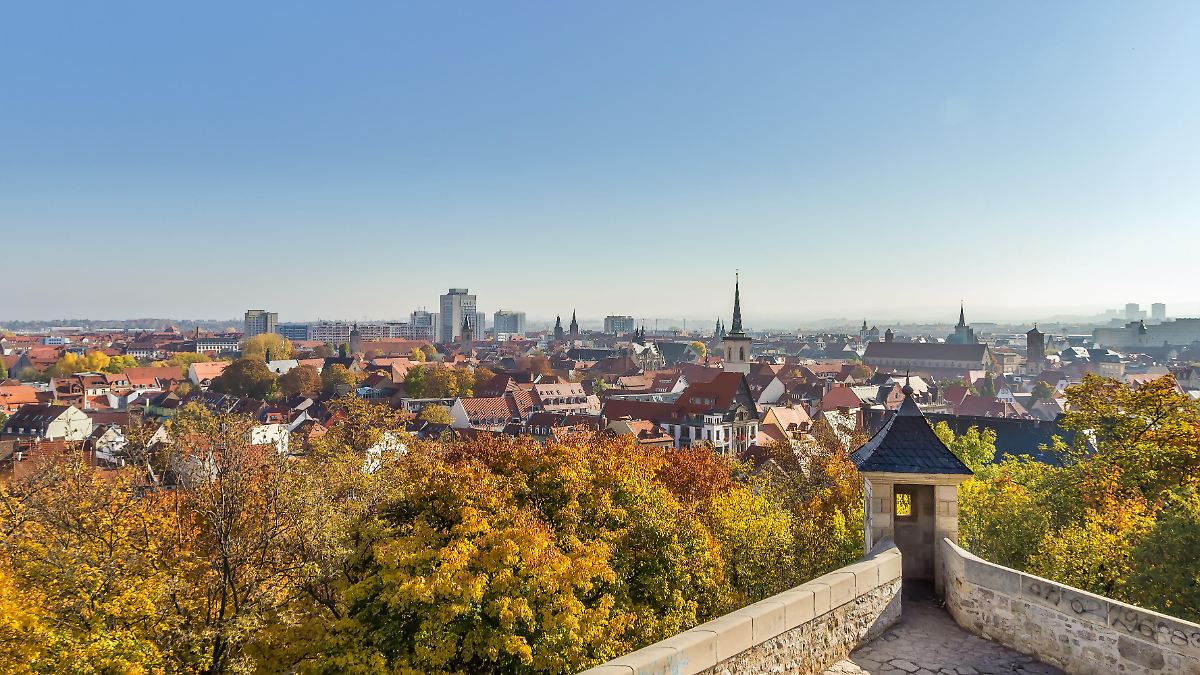 While the number of corona cases is falling or stagnating in the western federal states, they continue to rise in the east. The upward trend is particularly steep in Thuringia, which now has the highest incidence in Germany. This is mainly due to the extremely high values ​​in some of the children and adolescents.

A year ago, the 7-day incidence in Germany was 33.4 new infections per 100,000 inhabitants. Despite vaccinations, it is currently 65.4, which is almost twice as high. The big difference, however, is that the curve has been moving sideways for almost two weeks and not rising steeply as it was twelve months ago. This is mainly due to the western federal states, where the number of cases has declined significantly in some cases. In the east, however, they go up.

Especially in Thuringia, the number of new infections is growing rapidly, which now has the highest incidence in Germany. A contrary tendency is not to be expected there, since the middle of August the number of cases has been rising steadily and faster and faster. They have doubled within three weeks and are now around 104 new infections per 100,000 inhabitants per week.

Especially people without vaccination are affected. The Free State currently gives the 7-day incidence of the fully vaccinated as 20.7, that of the unvaccinated as 155. The values ​​relate to 100,000 people in the respective groups, which makes it clear that the difference is enormous.

This is partly due to a relatively high proportion of the population who have not yet been vaccinated and who apparently do not want to either. According to official RKI figures, only 61.2 percent of the population in Thuringia received at least one dose, 59.5 percent are fully protected. After the Saxon (58.3 / 55.6), these are the worst overall rates of all federal states. The Federal Republic currently has 68.6 and 65.4.

What is particularly critical for the health system is that only 81.2 percent of those over 60 in Thuringia are vaccinated. After Saxony-Anhalt (47.9), the Free State has the highest average age among the federal states at 47.4 years. According to Online social structure atlas 738,544 of the 2.12 million Thuringians are older than 60 years. This means that in this particularly vulnerable group there are almost 139,000 people without adequate vaccination protection.

Accordingly is loud Evaluations by Michael Böhme also the incidence of 60-79 year-olds in Thuringia over 45, among those over 80 even over 50. It is therefore not surprising that the occupancy of intensive care units with Covid-19 patients in the state is rising steeply. On August 15th it was loud DIVI intensive register only five corona cases, on October 3rd 16, yesterday already 37. Since October 1st, the proportion of corona patients in Thuringia’s intensive care units has grown from 2.5 to 5.6 percent.

To Ministry of Health figures Half of the intensive care patients were fully vaccinated in the week leading up to October 3. All those affected were over 60 years old and three out of four of the patients had previous illnesses.

Nationwide, 46.6 percent of the intensive care Covid 19 patients are now younger than 60 years, with the 50 to 59 year olds (23.5 percent) and the 40 to 49 year olds (12.9 percent) being particularly strong. are represented. The incidence of 35- to 59-year-olds in Thuringia is now just under 100, so the intensive care units could soon be filled with this age group as well.

Almost all circles currently only have warning level 1 out of 3. After three days, with incidences of 35 to 99.9, four to 6.9 hospitalizations per 100,000 inhabitants or a proportion of operable intensive care beds occupied by Covid 19 patients between 6 and 11.9 percent is proclaimed. The district of Sonnenberg is still in the green area.

Warning level 2 has only been declared in two districts. In Schmalkalden-Meiningen the infection incidence is 128 and the hospitalization incidence is 10.5. Saalfeld-Rudolstadt counts only 84.2 new infections and only 5.9 hospitalizations per 100,000 inhabitants. However, the values ​​are only three days below the range of warning level 2. In order to be downgraded, a circle must at least two of the three values ​​of the early warning system fall below the minimum values ​​on seven consecutive days.

The still comparatively mild situation is mainly due to the fact that the high incidence in Thuringia is mainly due to extremely high infection rates among younger people, who only very rarely become seriously ill. The incidence of 5 to 14 year olds in the Free State is already over 300.

In some regions, the number of cases of children is much higher. In the Kyffhäuserkreis, 0 to 14-year-olds even have almost 883 new infections per 100,000 inhabitants and week, in Hildburghausen there are 383 cases.

The high incidences of children have to heated discussions in the country about the protective measures in schools. Because at warning level 1 the applies applicable rules after only one mask requirement in the school building for face-to-face lessons for all age groups. In addition, tests only need to be offered twice a week, but are not mandatory.

Responsibility for adults More on the topic

It is doubtful, however, whether the schools are to blame for the high incidence in Thuringia. At least they have not been the places where the mostly unvaccinated children are most likely to be infected. Among other things, the student incidences in North Rhine-Westphalia and other federal states did not rise as feared with the start of school after the summer holidays, but they fell massively.

The previous scientific knowledge rather indicate that children become infected with older people, especially outside of school, and that educational institutions reflect the infection process in society. If Thuringia wants to protect the schools and reverse the trend, more people who are eligible for vaccination would have to get vaccinated and many adults would have to change their behavior.