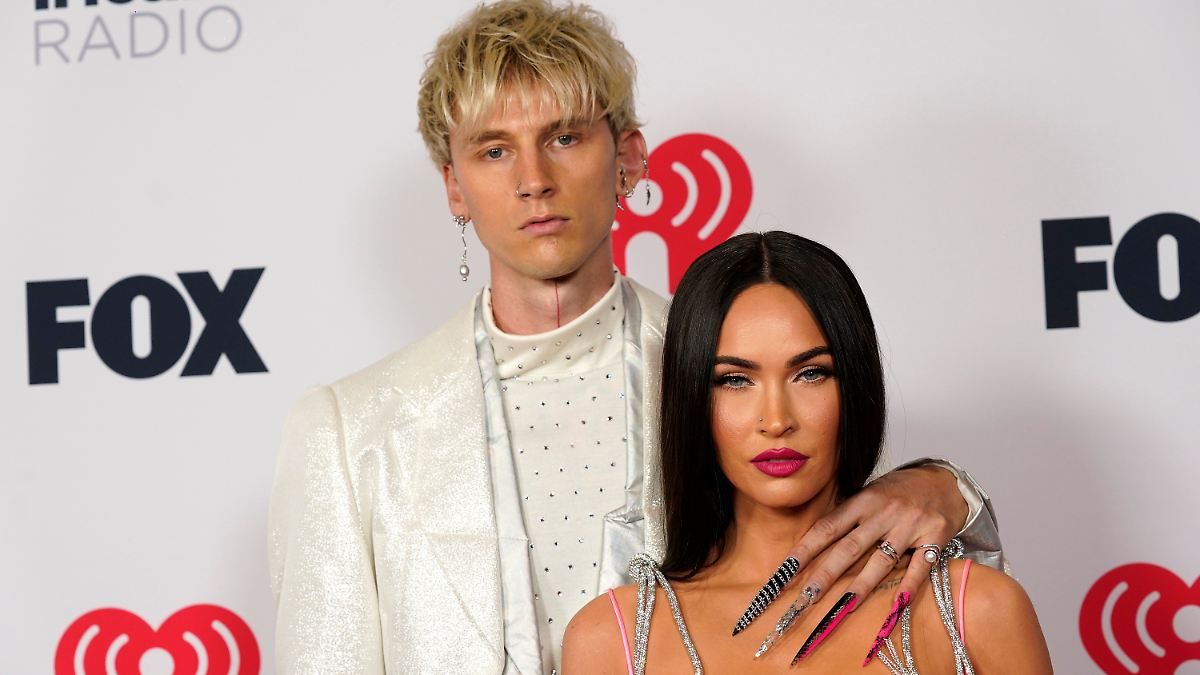 Megan Fox and Machine Gun Kelly have officially been a couple for a little over a year. And apparently they are still head over heels. There is no other way of explaining the love interview between the two of them in the magazine “GQ Style”.

The cover of the new “GQ Style”, on which the naked Megan Fox aims a revolver at the crotch of rapper Machine Gun Kelly (MGK), has already caused a stir. Now the interview that the couple gave the magazine is also public. And in it, the two of them let us look deeply into their relationship.

The actress and the singer had the words “The darkest fairytale” tattooed on their bodies as a temporary crowning glory of their love. According to Fox, the phrase “alludes to one of the first text messages we sent each other”. In his case, the tattoo landed on his hip. Originally, the two wanted to have the tattoos done on their respective inner arm veins. But Kelly is already covered with tattoos. In order to find a place where the new tattoo would not be lost, they had to hike down.

They met for the first time in 2020 on the set of the action flick “Midnight in the Switchgrass”, explain Fox and Kelly. But they had already met a few years earlier at a “GQ” party in Los Angeles. But they wouldn’t really have noticed their faces back then. “I just remember this tall, blond, ghostly creature,” explains Fox. “I looked up at him and thought, ‘You smell like grass.’ He looked down at me and said, ‘I am grass.’ And then, I swear to God, he disappeared like a ninja with a smoke bomb. “

Fox has a theory: “I don’t think we were allowed to see each other yet. We weren’t allowed to meet that night, so our souls, our guides, lured us away from each other because you literally had no face.” Addressing him, she then says: “Thank God, because what agony it would have been if I had known that you were there and I couldn’t reach you. It was better that I didn’t know.”

When Fox and Kelly met for the second time, she reminded him, among other things, of their first meeting. “What we both felt needed no words. It was clear from the first second what it was going to be,” says Fox of their relationship, “but we didn’t sleep together straight away.” They started flirting with each other in the Green Room. “She just asked, ‘How are you feeling?'” He recalls. “And I said, ‘I’m lost.’ She said, ‘Well let’s find you.’ That was the first real conversation we had. “

He sent her a few text messages, including the simple phrase: “I am grass”. Fox loved it. “I just replied, ‘How every fairy tale begins’.” Thereupon he ended the dialogue with: “At least the good ones …” After a few more text messages, they started talking on the phone. The first kiss wasn’t the right one, he says: “Even the first time we kissed, she didn’t want to kiss me. We just put our lips together and breathed each other’s breath, and then she just left.”

Fox explains that she tried to protect her heart even though she knew she was already deeply in love with him. “I (…) didn’t expect that I would run into my soul mate so directly,” she says. Obviously she had had enough of her previous life and the new paths had opened up. “It was as if all the obstacles that had separated us all these years had been removed and we could finally meet.”

On her first real date, Machine Gun Kelly picked up the actress in a 1974 Cadillac convertible. They heard songs by Ella Fitzgerald. He drove her to the edge of a canyon where a friend was waiting with a picnic on a blanket and a sea of ​​roses. Then they drove down Sunset Boulevard to the Roxy Theater, which was closed. “We went up on the roof and played pop-punk and made out,” he recalls. The rest is history.

More has been on the topic since July 2020

Megan Fox has been in an on-off relationship with US actor Brian Austin Green since 2004. In June 2010 the two celebrated their wedding. Shortly before the age of ten, they announced their separation. Their three sons were born in 2012, 2014 and 2016. He brought another son (born in 2002) into the marriage.

In late July 2020, Fox and Machine Gun Kelly confirmed they are a couple. Colson Baker, as the rapper’s native name is, also has a daughter from a previous relationship, who was born in 2009.