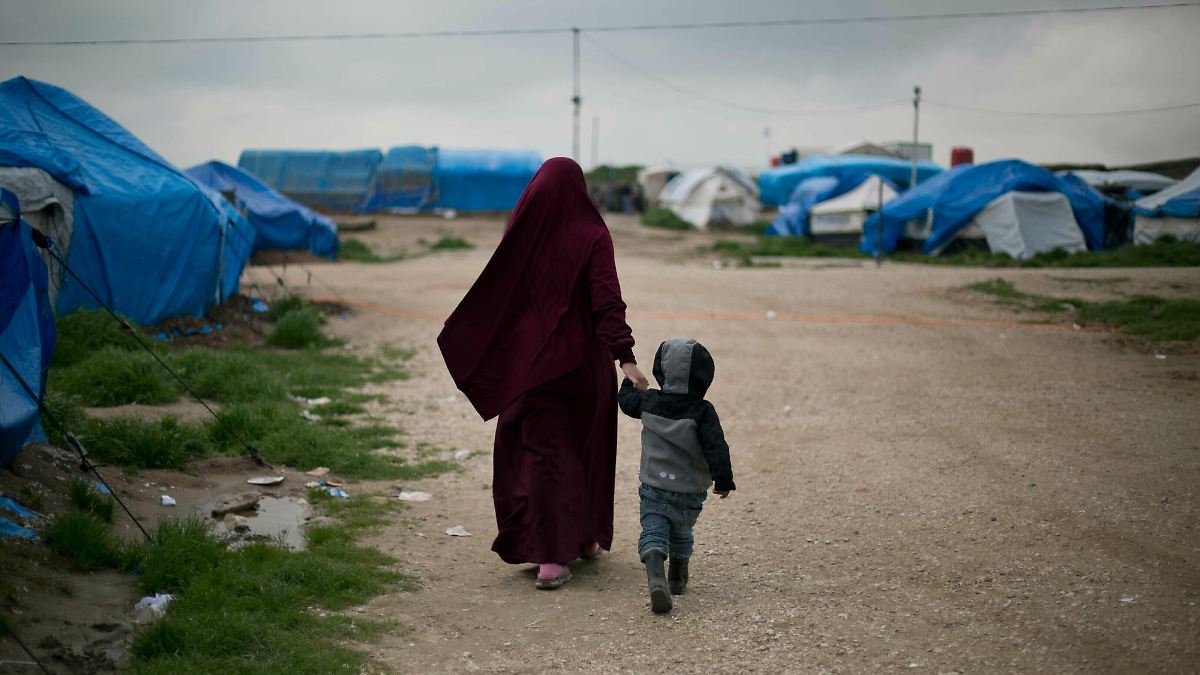 Many German women who joined the Islamic State terrorist militia in Syria and Iraq a few years ago now live in prison camps there. The federal government brought eight of them back at the beginning of October. The trials against them will be difficult.

Violence, too little food, poor medical care and many children die of diseases and malnutrition. The conditions in the prison camps in northeast Syria cannot, of course, be compared with German prisons. The Kurdish soldiers mainly housed the women of IS fighters and their children in the camps. They have lived there since the Islamic State (IS) terrorist militia was defeated three years ago.

One of the refugee camps is Roj. It is estimated that they still live there just over 100 Germans, including mostly women, but also some men. There are also a number of children, some of whom were born abroad. The men mostly sit in Kurdish or Iraqi prisons.

Even the eight women who were flown to Germany at the beginning of October, were imprisoned there. They had traveled to Syria and joined ISIS. The Kurds took them prisoner. German diplomats had negotiated with them in secret for months. Now the federal government has brought it back to Germany. A charter plane flew the women and children to Frankfurt am Main. Arrest warrants had been issued against six of the IS returnees. Three of them were arrested by the federal prosecutor’s office at the airport. The charge: membership in a terrorist organization. And they are said to have raised their children according to the radical Islamist ideology.

Women were actively involved in IS

The role of women in IS is not limited to the home and stove. “We know that some of these women were in their own women’s brigades who were partly responsible for maintaining this barbaric order. We know that women controlled, arrested and tortured other women,” reports Susanne Schröter, head of the Global Islam Research Center ntv podcast “Learned again”. “Women were also very important for logistics. They were far more important than you might think at first glance.”

One of the three women arrested was also allegedly part of such a women’s brigade. She is said to have owned a Kalashnikov assault rifle and learned how to use booby traps. The second woman traveled to Syria with her young daughter in 2014 and married at least six ISIS members there one after the other. She is also said to have brought other women to IS in Syria. At least two of the women are considered to be “threats”. This means that the police trust them to commit serious, politically motivated crimes.

Over 1000 people with German passports have gone to Syria or Iraq in the past few years, a quarter of them women. Some fought with IS, Al-Qaeda or similar terrorist groups or supported them. Around a third of these emigrated women and men have now returned to Germany. Since some also come back unnoticed, there is no really reliable number, explains Susanne Schröter, “because of course you can only count those that are picked up”.

The families of IS fighters in particular live in the Roj prison camp in northern Syria – food and medical care are in short supply.

In 2019, the federal government began to bring people from prison camps to Germany. First children, later women. Germany has to bring German citizens back from crisis regions, so it says in the consular law.

Europe is having a hard time bringing back IS supporters, said the Belgian think tank Egmont Institute on Deutschlandfunk. In the past two years, European countries have brought few women and children back to their home countries. Germany is according to the German Society for Foreign Policy next to Finland and Italy one of the few European nations that is bringing back not only adults but also children from the former IS area. Uzbekistan, Bosnia, Kosovo and the USA were the first to bring their citizens back home from Syria.

Last week’s campaign was the fourth and so far largest return campaign by German IS supporters. 23 children sat on the plane with the women. Many of them are marked by the conditions in the camp. Employees from the youth welfare office received them at the airport and are now looking after them. The children of IS returnees are traumatized and need psychological help, said Susanne Schröter. “We know that there are children’s toys that the classic jihadist family shows. Our society still faces some challenges, including those in the areas of upbringing, schools and pedagogy.”

The children are victims of their parents’ decision. The women who went to Syria and Iraq simply took them with them to the war – sometimes without their fathers knowing. The children and their siblings who were born locally are often neglected by their parents. You saw terrible things. One of the women who traveled back in October is also said to have shown her daughter’s execution videos.

In the camps for the families of captured IS fighters in Syria, over 60 children have already died this year – from violence, illnesses and accidents, says the organization Save the Children. Many governments are failing the children, so the allegation. The Kurds, who manage the camps, have been demanding for years that European countries like Germany should take back their nationals. According to Federal Foreign Minister Heiko Maas, the situation in the region is very difficult. From a logistical point of view alone, the retrieval is not easy, as many people from the region have to be worked with, according to the federal government. In addition, she no longer has a consular presence in Syria.

Many states did not want the former IS supporters back, says Susanne Schröter in the podcast. “Also because you know that it will be very difficult to hold something resilient against these people in court that will actually send them to prison. The conditions are very unfavorable for trials that are actually supposed to lead to a conviction.” In addition, experts in German courts are rather rare.

“Commit to responsibility together”

Finding reliable material from Germany and establishing identities is difficult. The police say they cannot search for clues in Syria and northern Iraq. In Syria, a country with a civil war, there are no recognized courts, but lawsuits against IS returnees are possible in Germany. One can probably prove to the IS women that they are members of a terrorist organization, explains Susanne Schröter in the ntv interview. There have already been some convictions of IS fighters. Their number lies in Germany in the middle double-digit range.

Perhaps it could be easier to bring the IS supporters to trial on site. Since the Islamic State was defeated, the Kurds have controlled the areas in Syria. The Kurdish authorities, however, say that they are unable to organize trials for all foreign suspects in prison themselves. You had therefore proposed an international special court several times. “Politicians should really think about that, then everyone would accept responsibility together,” says Susanne Schröter.

How can the former IS supporters who are back in Germany find their way back to normal life? De-radicalization programs should help. In order for this to work, the people themselves have to be ready to renounce IS ideology. This is particularly difficult with women, says Susanne Schröter, they would stay in radical circles or raise their children according to ideology. “The majority of all women, for whom it is difficult to prove anything, are not deradicalized either, because of course they will not go into these measures at all. You yourself do not think that you are radical, you think that you are have understood true Islam. “

There is no silver bullet for how we deal with former IS fighters. Not in Germany and so far in no other country. What definitely nobody wants: a new generation of IS fighters in Germany.