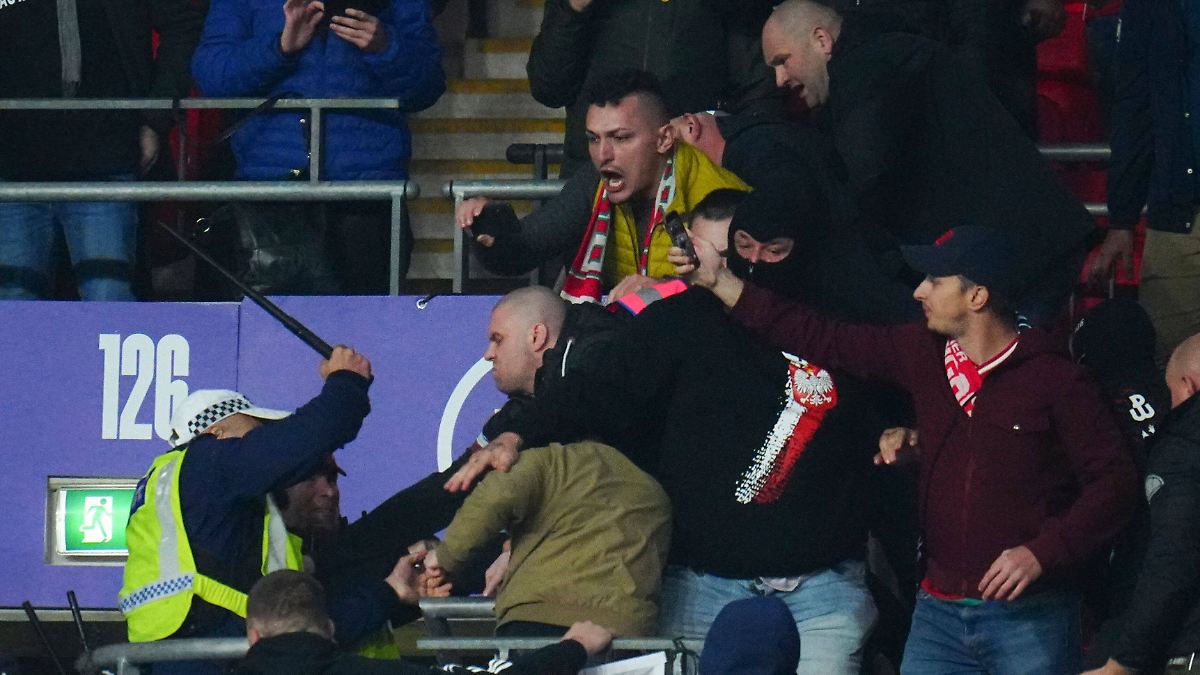 Again there are ugly scenes in an international match between England and Hungary. Away fans clash with the London police at Wembley Stadium. Europe is divided. Some states have chosen football as the stage for a culture war.

Once again, the Hungarian fans are creating ugly images in European football. At the World Cup qualifier at London’s Wembley Stadium, they did not convey just a touch of humanity for a moment. Hungarian fans whistled first when the English national team knelt before the game as a sign against racism. Then they again showed a banner against the kneeling, as in other games. After the game started, there were arguments in the block.

Police officers entered the block to arrest a bystander over a racist incident. This led to unrest and arguments. The police intervened with batons. “Order was quickly restored and there were no further incidents,” wrote the London police in a communiqué. According to English media reports, however, there were repeated attempts to disrupt order. The fans are said to have tried to penetrate the home area after John Stones equalized the 1-1 final score. They just didn’t succeed.

“A Chart of Maliciousness”

“It sounds like it is not acceptable, but I haven’t seen the details,” said England coach Gareth Southgate after the game, while the national team also commented on the pre-game banner against the kneeling. “If you have shown this banner against what we stand for as a team, as a nation, then I have nothing good to say about you as fans, as people,” said goalscorer Stones, who explained nothing about the whistles and the banner to have noticed. Hungary’s national coach Marco Rossi did not want to comment on the incidents after the game. “I don’t want to say anything about it. It’s not my job. Everything I say could be interpreted differently,” he said.

Some commentators in the English media have been less silent. “We came for football, but what we got was a 10-minute violent culture clash in the stands at Wembley Stadium,” he wrote “Guardian”. “It was a graph of malevolence portrayed by the fists of the traveling Hungarian fans and by what at times looked like a lone metropolitan policeman brandishing his baton of liberal justice.”

It is one of those oddities that Hungary was allowed to play with fans in England at all. Only after the first leg in the World Cup qualification was the Hungarian Football Association (MLSZ) condemned by FIFA to two ghost games and a fine of 185,000 euros. The second game was suspended. It applied to home games. It was pronounced after Hungarian fans racially insulted the English players Raheem Sterling and Jude Belllingham. The fans were allowed to travel to England and carry on. The current FIFA penalty is also not the only existing penalty against Hungary. Following similar incidents at the European Championship, UEFA has sentenced the association to two UEFA home games without spectators.

The pandemic is deepening rifts

On Tuesday, the Hungarian fans carried their anger and violence to England. Once again, FIFA is investigating and will issue a penalty. But there is little she can do about the situation. The problems go much deeper. Even before the pandemic, after racist incidents in a European Championship qualifier against Slovakia in 2019, Hungary had to play a home game in camera. But in the absence of fans and in the midst of the pandemic, the rifts deepened.

The subtle choreography of the Legia fans.

Large parts of the Eastern European fan scenes reject the kneeling before the games that emerged from the “Black Lives Matter” movement. That was not only evident in yesterday’s game, but has long since become a constant in European football. It is no coincidence that this rejection reached its hitherto despicable and subtle climax at the UEFA Europa League game between Legia Warsaw and Leicester City at the end of September. Before the game, fans of the Polish team unveiled a choreography with the words “Kneel Before His Majesty” – kneel before Your Majesty. Above it was a fictional king, who some connoisseurs of the scene claimed was probably the South African right-wing extremist Janus Walusz, who had already been revered by Legia fans in the past, who was responsible for the murder of a high-ranking member of the African National Congress (ANC). serving a life sentence.

Trouble in the Czech Republic too

There was also an incident at the end of September during the game between Sparta Prague and Glasgow Rangers, after which there was even diplomatic upheaval between the Czech Republic and Great Britain. The Czech Foreign Minister Jakub Kulhanek protested against reports that children and young people had racially insulted the Glasgow professional footballer Glen Kamara from the stands at the encounter in Prague. Kamara had already been racially insulted by opponent Ondrej Kudela during the Europa League round of 16 between Rangers and Slavia Prague last March.

In the September game he had seen the yellow-red card after he had been booed by some of the 10,000 young Sparta fans every time they hit the ball. Numerous media reports of racist insults, ntv.de also has a picture that shows two children with a “Kudela Team” sign. As a reminder: This one plays for local rivals Slavia Prague. An instrumentation of the young people who came to the stadium with a special permit is obvious. The game should actually have taken place behind closed doors after a racism scandal in the Sparta game against AS Monaco (0: 2).

Football as a weapon

The current furor of political protests and outbreaks of violence by those who oppose any political interference in football is a sign of a deep division in society, which is further distressing football, which has already been torn apart by the geopolitical influence of entire countries in club football. It’s not news: In Europe, some states are playing culture warfare and they have chosen football as their platform. With the fans returning to the stadiums, this war is returning. The 18 months of the pandemic have made the incidents even more massive and divisive. On both sides.

“It seems that UEFA continues to employ informers who have nothing else to do just to write reports on what has been said (or not said) in the audience,” Hungary’s Foreign Minister Peter Szijjarto wrote on Facebook in July. The European football association had just completed the investigation into racist and homophobic statements and sentenced the Hungarians to ghost games.

“There is a lack of orientation. Some people are frustrated with what is going on in the world,” said Piarar Powar, managing director of the anti-racism alliance FARE, in an interview with ntv.de. “They reject everything that the Black Lives Matter movement and” Take A Knee “stand for. You cannot escape the fact that there are governments that are fighting a culture war. Especially the governments in Central Eastern Europe set liberal norms in question, “added Powar.

“Viktor Orban uses football as a weapon to demonstrate his personal power and also as a reservoir for an aggressive young male cultural militia,” recalled the Guardian in its commentary on the incidents at Wembley Stadium, and was thus in line with Powar and also with the British football writer James Montaguewho describes the hooligan gangs as “an important constituency for the rise of populist, illiberal governments, particularly in Eastern Europe and the Balkans”.

The English Football Association (FA) now wants to investigate the current incidents and report them to FIFA. The has started investigations and condemned the incidents in the strongest possible way. The world federation will pronounce a penalty and both sides will interpret it. One side will judge it to be too low and the other side will speak of undignified interference. The political violence will continue.