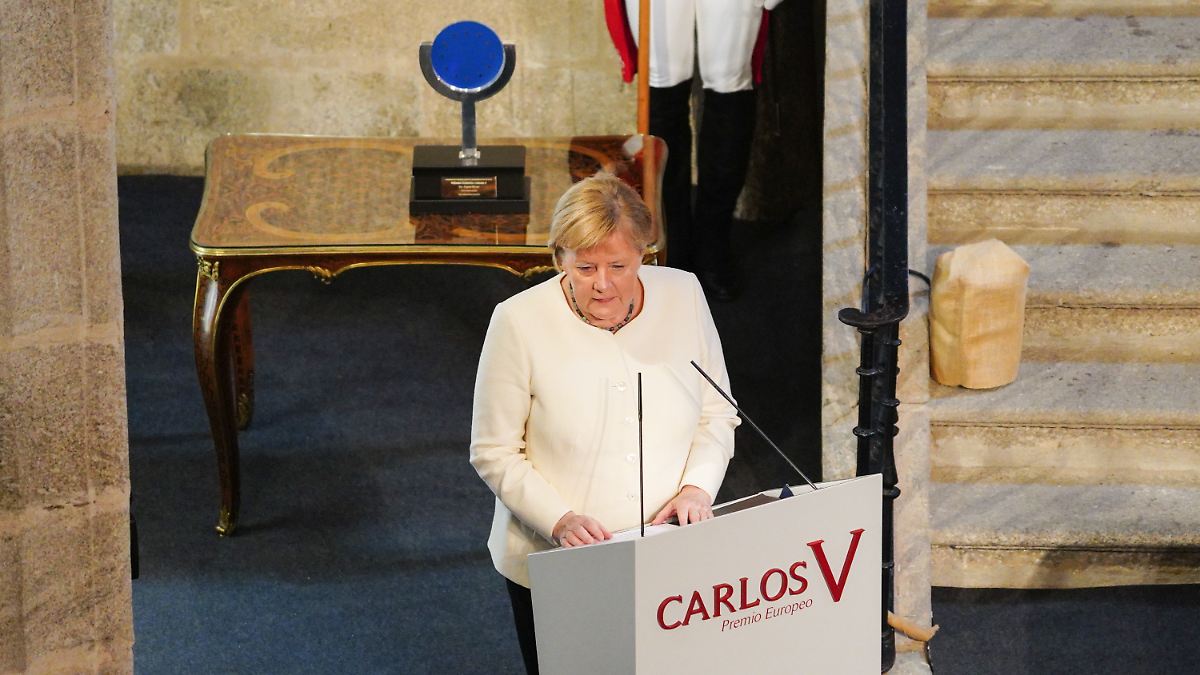 The outgoing Chancellor is awarded the Charles V European Prize. She is praised for her commitment to the European idea. Accordingly, Merkel uses her speech to name the values ​​of Europe. At the same time, she warns that the road is never complete and that a lot of work is still necessary.

In a solemn ceremony in Spain, Chancellor Angela Merkel was honored with the European Charles V Prize. King Felipe VI. presented the Chancellor with the award in the church of the royal monastery of Yuste in recognition of her longstanding political service to Europe. In her acceptance speech, Merkel appealed for a common commitment to European values, advocated “sincere dialogue”, the ability to compromise and “staying power”.

“Europe is only as strong as it is united,” stressed Merkel, who is about to leave after 16 years in office. Peace and freedom are “anything but self-evident” and must be “protected and defended”. The prerequisites for this are “close cohesion, trust and respect”. Referring to the European Union’s award of the Nobel Peace Prize in 2012, Merkel emphasized that she “saw it as a permanent obligation to protect peace both within Europe and our liberal order, as well as externally in our neighborhood and in the world to stand up for peace and human rights “.

In the EU “centrifugal forces have been working for some time,” said Merkel. These arise “when the cement of common values ​​becomes fragile”, when expectations of the EU and its institutions are not fulfilled, social developments take place at different speeds and economic and social differences become too great. Merkel stressed that there was only one effective way to counter this imbalance: “To ensure that we remain in an honest dialogue with one another and that our common values ​​are emphasized.” These are “respect for human dignity, freedom and democracy, equality and the rule of law, and the protection of human and minority rights, which are firmly anchored in our European treaty”, emphasized Merkel.

Merkel: Acting in a European way takes a long breath

The process of European unification is never complete, but rather a “continuous development, she stressed. Merkel called for sustained commitment:” To act European all too often means to have staying power and to mediate. “For the future, however, Europe must The Chancellor said that the EU must “be able to make and implement joint decisions more quickly than has been the case in the past,” said the Chancellor, particularly in times of crisis.

The European and Ibero-American Academy of the Yuste Foundation awarded the prize for the 14th time. Merkel was recognized for her “embodiment” of European values ​​and as an “unwavering advocate of the European integration process and the important strategic role of Europe on the international stage”.

Emperor Charles V retired to the Yuste Monastery in the Extremadura region in 1556 after the then most powerful man in the world, Emperor of the Holy Roman Empire of German Nations and King of the Spanish Empire, had resigned from his office. The Spanish European Prize Charles V should not be confused with the International Charlemagne Prize in Aachen, which was named after Charlemagne.