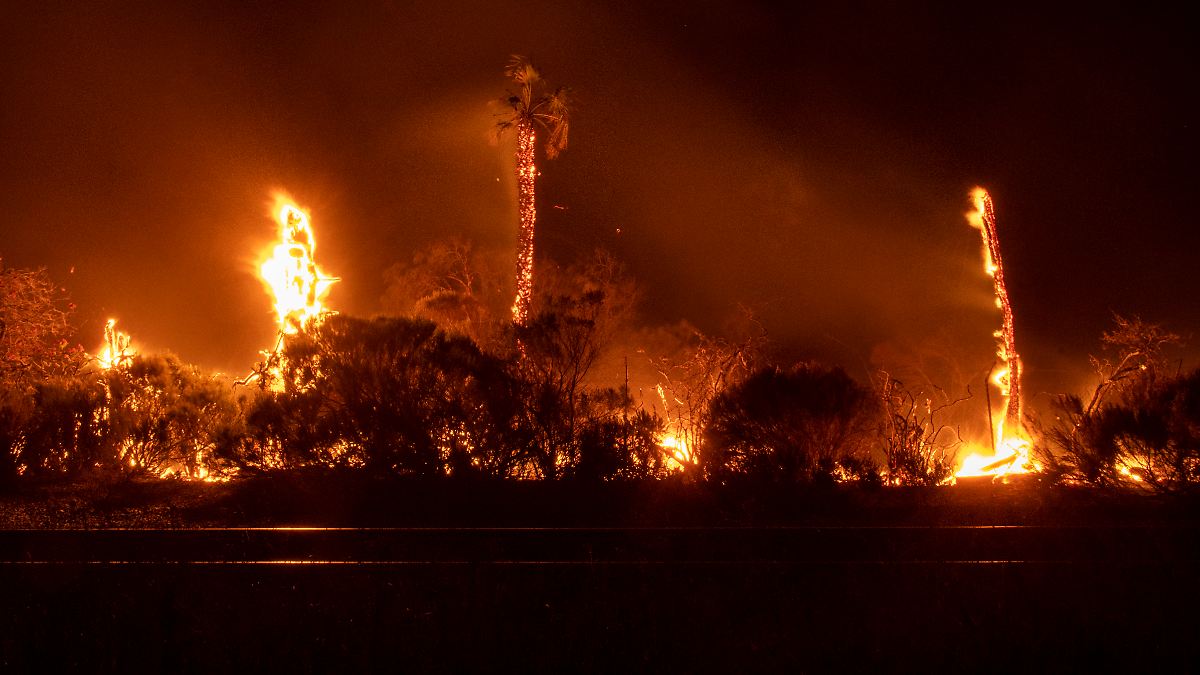 Siberia, Italy, Greece, Albania, Spain, Turkey and of course California – it burned everywhere this summer. “The balance between nature and fire is changing,” says Johann Goldammer from the Max Planck Institute for Chemistry. In California, for example, it used to burn between May, September and October, and it was quiet in the winter months. “Our colleagues in North America are now observing that the fires burn practically all year round,” warns the fire ecologist. The cause? The climate change. Some forest experts are therefore trying to make forests more “fire-resistant”. A topic that is also being discussed in Germany, says Goldammer. From two perspectives, because “fire-resistant” also means that we have to cut back on biological diversity. Why are fires useful? Why does rural exodus encourage forest fires? Why are most not natural disasters? Answers can be found in ntv’s climate laboratory.

ntv.de: Deutschlandfunk used to have you “Lord of the Fires” called. Do you like the name?

Johann Goldammer: The term implies that I either control fires or that I rule over fires. I would tend to go with the first version. Of course, I don’t rule over fires at all, because fires have reached such dimensions worldwide since prehistoric times that nobody rules over them at all. But mastering a brand – you can do that in individual cases. Quite a few or related to a region. You can already say that if you deal with this topic in your professional life.

It is not a normal career, you cannot become a fire ecologist through training or a degree. You do this yourself by having a professional background – in my case forest science, but it can also be biology or environmental science, come across the topic of fire and then work on certain questions, for example: What role or what function does fire have in ecosystems? What are the effects of natural fire? What about man-made fires? Are the effects the same?

For us fire is often something negative. It sounds like you care a lot about it. Do you love or hate fire?

When I started in 1973, I approached the subject very objectively. At first there was a certain fascination. Then in the course of my work I have experienced many fires that one can love because they are useful for the ecosystem, for the environment, for humanity. But there are also fires that are incredibly destructive, that destroy.

What does a useful fire look like? When does it make sense?

Johann Goldammer investigates worldwide how fires arise, what damage they cause, but also what benefits they have.

With this question, it makes sense to go to a region where the cause of fire is not man, but nature. These are many regions in the world where lightning strikes have actually been around for evolutionary times.

This is, for example, the taiga of Siberia, the northern regions of North America such as Alaska and Canada. But these are also the tropical, subtropical savannahs in Africa or the Australian bush.

So do the fires play an important role in the landscape?

What really helps against climate change? Klima-Labor is the ntv podcast in which Clara pepper and Christian Herrmann Examine ideas that sound great, but which are not always very clear about how useful they really are. Should we feed cows with seaweed? Equip cargo giants with large sails? Green hedge funds appointed to supervisory boards?

The ntv climate laboratory: Listen to it every Thursday – half an hour that informs and is fun. On ntv.de, in the ntv app and wherever there are podcasts: Audio Now, Apple Podcasts, Amazon Music, Google Podcasts, Spotify, Rss feed

In these regions, fires burned before humans even appeared. This begs the question: What did the fire do in this vegetation, in these ecosystems? Did it help create certain ecosystems? This question has to be answered in the affirmative, as we see, for example, in the pine and larch forests of Siberia in very remote forest areas. Many of these trees are hundreds of years old and often have large black fire wounds on the base of the trunk. There the fire has practically eaten its way into the tree rings. How can it be that this forest has managed to cope with the fire over these many hundreds of years? The lightning strikes burned through these forests every 20, 30 or 40 years and cleared away the fuel on the ground. As a result, the fires on the whole are relatively small and have remained low in intensity and are therefore not destructive.

It’s in this year too Siberia burned, in addition in Greece, on Sardinia, in the Turkey, California – Was there any fire involved that had something or was it purely destructive?

This year we have seen many fires on all continents that were different from before. That has something to do with new framework conditions. What we see today and what we will see more in the future no longer has much in common with the past. The climate has changed relatively quickly.

Due to climate change, we now have dry periods and drought periods in the regions mentioned, which last much longer – combined with sometimes extreme heat waves. If we stay with Russia: In western Russia, in Moscow, there were temperatures of over 30 degrees as early as spring. In central Siberia, in Yakutia, where there was a lot of fire this year, temperatures of up to 50 degrees Celsius have been reached. And if we look across the Atlantic to California, we see that the fire regime has changed: the typical seasonal occurrence of fire with the typical effects associated with it.

It used to be the case in California that it typically burned between May, September and October and was quiet during the winter months. Our colleagues in North America are now observing that the fires burn practically all year round. These are the consequences of climate change. In this respect, we are now entering a new era of the Age of Fire with great differences compared to recent history. Something like a balance between nature and fire had come about. This balance changes.

You have summer in the Austrian “Default” said that rural exodus also promotes forest fires. What do you mean?

That is the other side of the development that we are observing in some regions of the world – especially in Southern Europe and Southeastern Europe. The young generation moves from the country to the cities and is looking for their professional future there. This means that the villages are aging. Only a few elderly people remain, but they no longer cultivate the land. This brings the landscape overgrown. We see that in Turkey, in Greece or in Italy, for example, where there was a lot of fire this year: What used to be intensively cultivated through agriculture and grazing, including olive tree plantations and rainforests, is more and more fallow. But the production of plant biomass continues. This means that no matter how the fires started, there is more food to be found. This makes them larger and more difficult to control.

There is some irony in the fact that we leave nature to its own devices and end up making the situation worse.

Yes, that is a discourse that we are also entering into in Central Europe, especially in Germany: How do we deal with it in the future? How do we deal with protected areas? There are very different opinions and views on this. Some say that we have to completely protect these forest ecosystems if we no longer use them so intensively so that we can promote biodiversity or higher carbon sequestration. Others say that we have to use the forest intensively in order to achieve exactly what I have described: that the plant biomass that grows back is not available for fire during periods of extreme drought and heat waves.

How could you effectively protect these natural spaces from fire? In California, scientists want that Making forests “fire-resistant” – how does it work?

If we want to make forests more robust or resilient, we have to look in two directions. In natural forests, nature regulated this itself, so to speak: lightning fires regularly cleaned up the forest. As a result, they did not have uncontrollable fires. The same applies by analogy to our cultural landscapes, where the forests have been used for centuries by forestry, logging, but also as forest pasture or even for agriculture in the forest, so-called Agroforestry. Such combined land use systems are very resilient.

Let me get to the point: The oaks in the Spessart were able to become so robust and old because they were fattened for centuries. In these so-called hat forests, the animals ensured that these forests were not very dense, but rather open. They were characterized by low vegetation, so no wild fire could spread. Due to this intensive management, however, not all animal and plant species can occur that we would like to see there from the perspective of biological diversity.

Are we making progress in Germany?

Science is currently trying to explore this in different directions. For example, we have to see whether we can find candidates in the pool of tree species that occur naturally that can cope with the future. Which ones can cope with the changed climate? There was a bit of disillusionment that the beech, which has long been relied on as a tree of the future, cannot withstand periods of extreme drought. Perhaps that is why we have to look again at regions where the climate is already like what is in store for us. It is important to investigate whether the spectrum of tree species is changing in the direction of the Mediterranean or in the direction of the subtropics, North Africa or south of the Sahara.

But there are also regular fires in the Mediterranean region.

So far we have only discussed whether a fire finds more nourishment and thus burns more intensely and more difficult to control. Now the question is: How does a fire come about? In Germany and ultimately all of Europe, we assume that between 97, 98 and 99 percent of all fires are caused by humans. A forest fire is sometimes referred to as a natural disaster, but it is very, very different from a typhoon, hurricane, heavy rainfall or an earthquake: humans cannot prevent them. But if 99 percent of the fires in Europe and Germany are caused by humans, we could actually avoid 99 percent of them. But for that people would have to go along and that is obviously not the case.

The question is, how do you get people to be more careful?

We can achieve a lot in the area of ​​prevention. In the agricultural sector in particular, we have many cases where fires are caused by machines that run hot. It is also known that motor vehicles parked on dry grassy areas can cause fires due to hot catalytic converters. We see this negligence in Italy and Greece as well. A lot of fires started this year because people burned their garbage or tried to clean their fields with fire, so to speak. This is traditional behavior, but it can be very dangerous in the new general weather conditions. You have to start there.