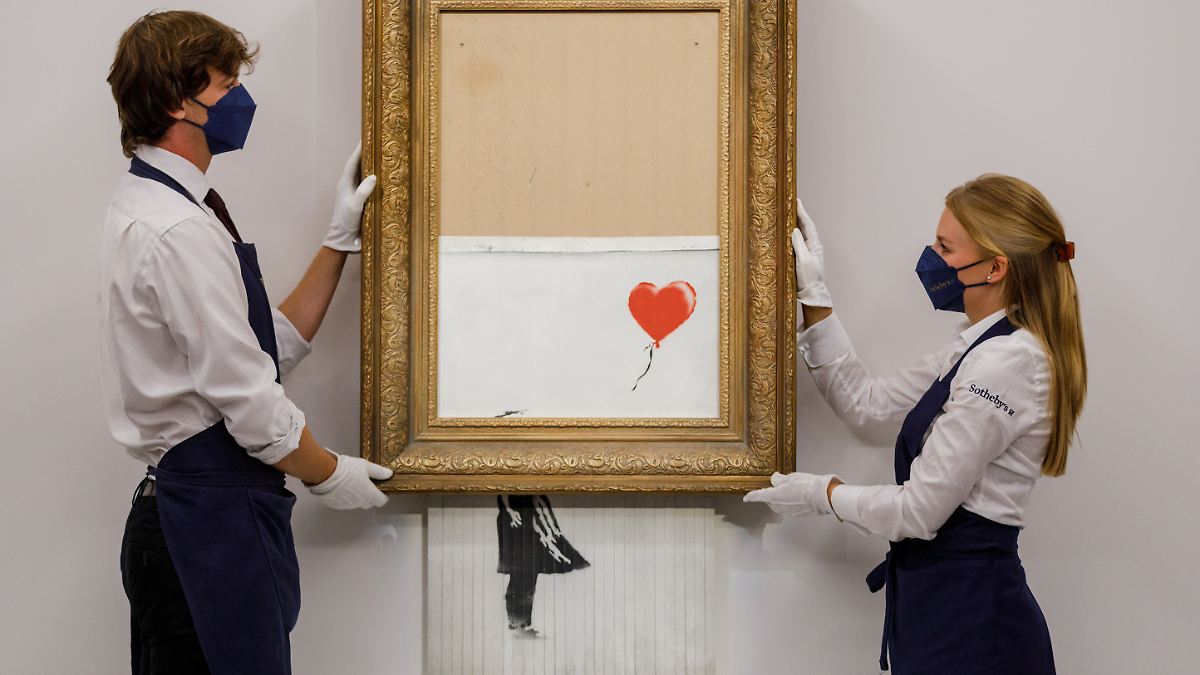 Banksy – the mysterious street artist – has achieved a record amount with his shredded artwork at auction. In doing so, he actually criticizes the price spiral in the art sector – and yet drives it himself.

It was probably the most spectacular action in Banksy’s spectacular career: just auctioned for around 1.2 million euros, his work “Girl with Balloon” almost completely destroyed itself at the push of a button. The legendary artist had a shredder in the frame that went unnoticed built-in. The action, which Banksy had apparently planned well in advance, hit like a bomb three years ago. Now the work will be auctioned again – in shredded form, mind you. The difference: the value has multiplied. Ultimately, the hammer falls at 16 million pounds (18.89 million euros), plus fees in the millions. That is significantly more than the seven million estimated by the London auction house Sotheby’s.

But how can this be explained? Eventually, the idea that the art market continues to escalate becomes entrenched – with that, the Briton Banksy, whose true identity is still unknown, would have triggered the opposite of what he had apparently intended. The shredder was intended as a criticism of the art market, as the street artist, who was born in 1974 according to Sotheby’s, portrayed on his Instagram account shortly after the campaign. But instead he contributed to the hype and even renamed the work. “Love is in the Bin” is the official name of the partially destroyed picture. Love is in the bucket. The motif is known worldwide: a girl reaches for a heart-shaped balloon – or has just let go of it, the interpretations diverge.

The motif first appeared on a wall in London in 2002, since then it has appeared in several versions on walls around the world and has been reproduced countless times as a print. In 2017 “Girl with Balloon” was voted the most popular work of art in Great Britain – and in October 2018 the shredding campaign. Only part of the girl’s head can be seen, the balloon is floating in front of a white background. The rest of the work looks out of the frame below, divided into fine strips. Tens of thousands wanted to see the picture at exhibitions.

Banksy even changes the title of the picture

The art world was delighted too. Sotheby’s celebrated “Love is in the Bin” as the “first work of art in history that was created live during an auction”, while the Guardian newspaper attested Banksy that it was his “greatest work”. “What could be worth more than a Banksy? A shredded Banksy!” Cheered the Daily Telegraph. The unknown European collector who bought the original painting for £ 1.04 million kept it. And now really cashes in.

“You just have to have Banksy on it and the prices skyrocket,” says a connoisseur of the art market in London, who does not want to be named. High point so far: In March, Banksys redeemed a square foot “Game Changer” painting recognizing the efforts of doctors and nurses in the pandemic, £ 16.8 million for the University Hospital in Southampton, England, and other NHS organizations. Even smaller prints cannot be had for less than a few tens of thousands of pounds; a color screen print of “Girl with Balloon” recently sold at the London auction house Bonhams for around 150,000 pounds. With his anonymity, Banksy contributes to the hype, as the art market connoisseur says. If new works emerge, as was the case most recently on the English North Sea coast in mid-August, the coverage is enormous.

Banksy uses his fame: It is mostly socially critical issues that he addresses with his works. But even the unconventional artist does not seem to be able to capture the art market.