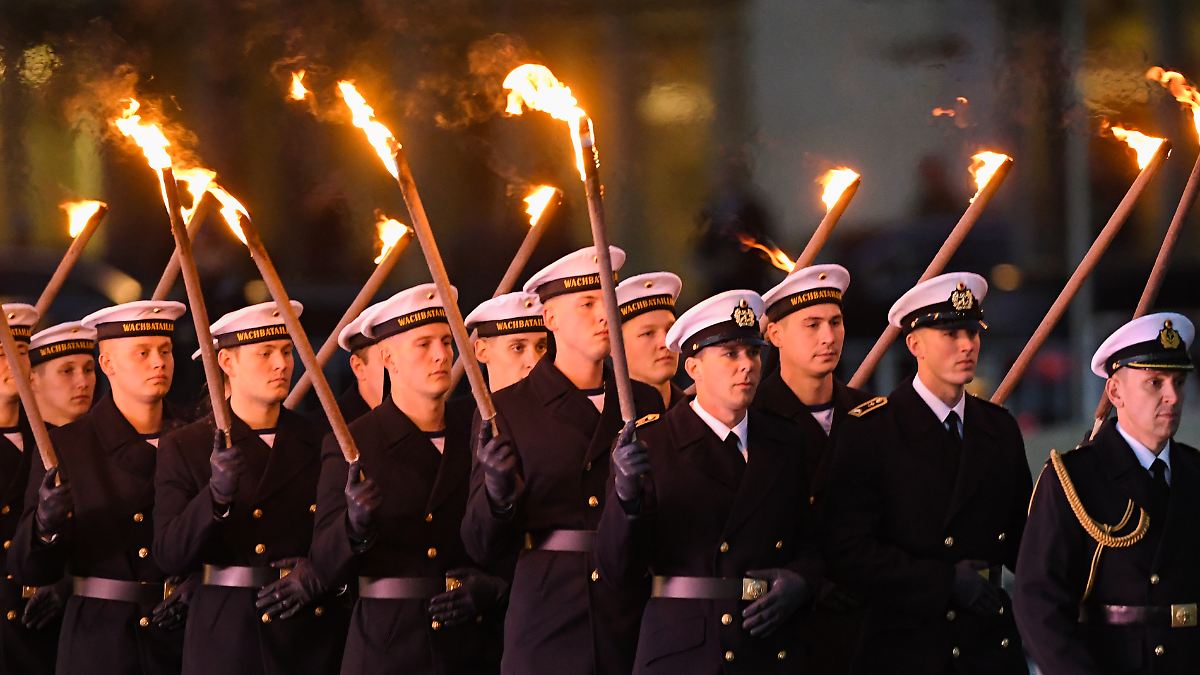 It was to be a memorable moment: with the great tattoo, soldiers were solemnly honored for their work in Afghanistan. But the image of countless torches in front of the Reichstag does not let go of many – and is also met with sharp criticism on the Internet.

Soldiers with torches in front of the Reichstag building – pictures of the big tattoo to honor the Bundeswehr mission in Afghanistan have caused some alienation and criticism on the internet. A number of Twitter users felt reminded of dark chapters in German history by the scenes. Other users disagreed, and several defense politicians reacted with irritation. “Ceremonial was absolutely appropriate in form, dignity & in the only right place (parliamentary army in front of parliament)”, commented the FDP politician Marie-Agnes Strack-Zimmermann. “Sometimes I really don’t understand Twitter anymore,” wrote the Green politician Tobias Lindner.

The catchphrase #Zapfenstreich was temporarily in second place on Thursday morning on the Twitter trends for Germany. The Bundestag and the federal government thanked the roughly 90,000 men and women of the Bundeswehr deployed in Afghanistan for their difficult mission on Wednesday. A closing roll call in front of the Ministry of Defense was followed by a grand tattoo in front of the Reichstag building, the highest military ceremony of the German armed forces. Representatives of the five constitutional organs, including Chancellor Angela Merkel, were present on Wednesday.

The former Green politician Jutta Ditfurth wrote on Twitter: “When Germans pick up torches”, she and Max Liebermann say “I can eat as much as I want to throw up”. She criticized that the tattoo served to “militarize society”. The left-wing foreign politician Sevim Dagdelen referred, among other things, to the civilian victims of the war in Afghanistan and the 59 Bundeswehr soldiers who lost their lives in Afghanistan. “What is there to celebrate with this militaristic mummery?”, She also asked on Twitter.

The Greens external expert Omid Nouripour, on the other hand, described the tattoo as “correct, dignified and moving”. The Green Defense politician Lindner wrote that it was good and right to honor the Afghanistan mission with a big tattoo in front of the Reichstag building. “As the Bundestag, we have an ongoing responsibility for what has been in the last 20 years and for what lessons will be learned from it for the future. There is no more suitable place for this than this Parliament. And anyone who needs information about the ceremony itself , feel free to get in touch. ”

The Federal Ministry of Defense has also reacted with disillusionment to the criticism of the Great Zapfenstreich. “Debate is necessary and important. Comparisons with Germany’s darkest chapter disappoint us,” the ministry wrote on Twitter on Thursday. The Bundeswehr is a parliamentary army. “As this she has her place in the midst of society – on special occasions also in front of the Reichstag building.” The ministry posted an explanatory video about the tattoo to accompany the comment.

The origins of the tattoo go back to the 16th century. With the custom today, for example, Federal President and Chancellor as well as Defense Minister are honored at their adoption. The ceremony always takes place in the evening and consists of a parade, several pieces of music – including the national anthem – and the march out. The big tattoo always includes torchbearers. There was a big tattoo in front of the Reichstag building around 2015 to mark the 60th anniversary of the Bundeswehr.