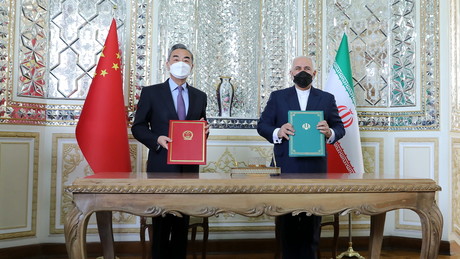 The People’s Republic of China and the Islamic Republic of Iran have recently signed some very significant documents to further build mutual relations. These are now to be implemented through various measures.

Iranian Foreign Ministry spokesman Said Khatibzadeh said on Tuesday that Iran and China are looking forward to a “new horizon of cooperation”. This was reported by the Chinese news agency Xinhua. The foreign ministers of both countries had previously visited each other to consolidate the Sino-Iranian partnership.

In addition to the geographic proximity between Iran and China, both states are also linked by their history, culture and politics as well as interpersonal relationships. The Iranian diplomat said so in an interview with Xinhua. Both nations have been connected to each other by the Silk Road since ancient times.

In particular, the launch of the comprehensive strategic partnership in January 2016 represents a “very important moment and turning point” in terms of “creating new pillars of the bilateral relationship”, according to Khatibzadeh.

Last year, the two countries signed a comprehensive plan of cooperation during Chinese Foreign Minister Wang Yi’s visit to Tehran to mark the 50th anniversary of bilateral diplomatic relations. For his part, Iranian Foreign Minister Hossein Amir-Abdollahian visited China in mid-January. Tehran and Beijing thus initiated the implementation of the 25-year plan after what Khatibzadeh described as a “very comprehensive and lengthy discussion” between Amir-Abdollahian and Wang.

In view of the latest developments in bilateral relations, Tehran and Beijing are now in a good position to clarify further details. It is about how they could implement their consensus in different areas, according to Khatibzadeh.

Iran has always supported China in its core interests, for example with regard to the One China policy. On the other hand, China has for its part helped Iran in various areas, such as helping to fight the corona pandemic at a very difficult time.

Bilateral relations would not only benefit the two countries, but also the region and, moreover, the whole world. Together, the two nations want to defy unilateralism and the “policies of intimidation that Washington is trying to dictate in the international arena.”

Khatibzadeh also pointed out the need to consider and carefully shape interpersonal relationships and exchanges in public diplomacy. Both countries had chosen to bring their peoples together. Chinese and Iranians need to understand each other better.

China and Iran have taken a number of measures to promote intercultural relations. For example, Chinese tourists no longer need a visa to travel to Iran. In Iran, more and more Chinese films are being shown in cinemas and Chinese courses are being offered at universities. There is a lively exchange between the institutions of both countries. For the purpose of increased cultural exchange, various fairs and festivals are planned to be held in both countries.

Another area of ​​cooperation is the joint effort against the disinformation campaigns of the USA and other western countries. These were directed against both the People’s Republic of China and the Islamic Republic of Iran.

More on the subject – Fear of multipolarity: US puts pressure on Emirates over China