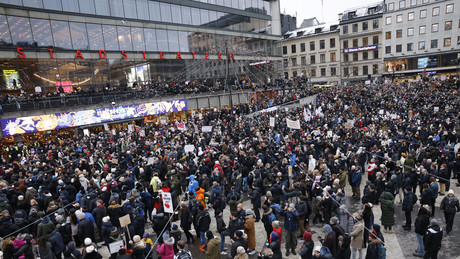 Also in Sweden, which compared to other countries hardly had to accept any restrictions in the Corona crisis, there were demonstrations against Corona vaccination cards today. More than 18,000 people demonstrated in Stockholm against the restrictions.

More than 18,000 people had registered for the demonstration in Stockholm on Friday afternoon. The organization behind the event, Frihetsrörelsen (in English: freedom movement), was given permission to demonstrate.

The demonstrators gathered at Stockholm’s Norrmalmstorg to express their dissatisfaction and then proceeded towards Sergels torg. The protesters chanted “Ja till frihet, nej till vaccinpass” (“Yes to freedom, no to the vaccination pass”). As Fahlström announced on afternoon, the demonstration was largely peaceful, so far there have been no unrest.