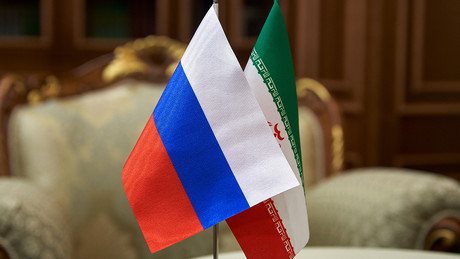 The strategic partnership between Russia and Iran marks a clear rapprochement of the US’s main rivals in the region, especially since the US debacle in Afghanistan. Geopolitics seems to be back.

Since the debacle in Afghanistan, the West’s world domination and its claim to world order have suddenly been massively endangered. While Russia has been putting a stop to the global dominance of the USA in the course of its eastward expansion in the Eurasian land mass in the Ukraine conflict since 2014, Iran has been challenging US ambitions and its “democracy” experiments in the Middle East for years.

In the context of hybrid warfare, the West has recently launched a large-scale media campaign against US “adversaries”, namely Russia and Iran, in order to distort the facts of the current situation in international politics. Alarm bells are ringing in the transatlantic community as Russian troops are being massed within Russia’s own borders while the West threatens “unprecedented sanctions” on Moscow. The same transatlanticists use menacing rhetoric for Iran to return to its nuclear deal commitments, while showing no willingness to provide binding guarantees to lift sanctions on Tehran.

Against this background, Russian President Vladimir Putin and his Iranian counterpart Ebrahim Raisi met in Moscow. According to the Iranian ambassador in Moscow, the meeting of Putin and Raisi is said to have lasted more than three hours, during which important issues related to bilateral cooperation were discussed. At the summit, Putin called on Iranian President Raisi to Regards to the political and religious leader of Iran, Ali Khamenei.

At the summit, Putin underlined that Iran and Russia had contained the threat of terrorism in Syria and stressed the need for Russia and Iran to exchange views on the new crisis in the region, namely Afghanistan. Raisi said Iran had resisted US aggression for more than 40 years, adding that US sanctions and threats could not stop Iran’s progress. At the summit, Iran and Russia showed their determination to update their 20-year cooperation agreement to the level of a strategic partnership. Iran and China previously signed a 25-year deal, with Beijing planning to invest $400 billion in Iran’s infrastructure.

Iran’s parliamentary speaker traveled to Moscow in February 2021 to deliver a message from Chief Khamenei to President Putin to reassure Russia’s partner in Eurasia that Iran intends to remain committed to its eastward orientation strategy. At the time, Russia and China had complained about Iran’s rocking course under the Rouhani government.

For years, the conservative camp in Iran has been observing the growing power of China and Russia in world politics on the one hand and the gradual withdrawal of the USA from the region on the other. The Raisi government has already stated that it will prioritize east over west and neighboring countries over distant countries in its foreign policy in order to safeguard Iran’s national interest against the western sanctions regime.

With the arms embargo against Iran expiring in October 2020, the UN Security Council can no longer boycott the purchase or sale of conventional weapons, including tanks, missiles and fighter jets. At the time, the United States threatened secondary sanctions against those countries that entered into arms deals with Iran. However, Russia does not recognize the US’s unilateral extension of the arms embargo on Iran. For Tehran, the acquisition of Russian weapons, especially modern fighters, is of great importance.

Tehran and Moscow are reportedly to sign a $10 billion security and defense cooperation agreement that includes the purchase of Su-35 fighters and S-400 missiles. Should the deal come about after Raisi’s visit to Moscow, it would be a game-changer in the region, as new Russian offensive and defensive weapons would increase Tehran’s deterrence against threats from Israel, particularly in Syria.

Russia, China and Iran have a joint military exercise on Friday started. The three countries have held joint maneuvers in the past. They are now intensifying their security cooperation after the US has gradually withdrawn from the region. While the US vassals in the EU continue to turn the “regime change” screw in the East, the cooperation agreement between Iran and Russia marks a clear rapprochement between the West’s main rivals. Geopolitics seems to be back.