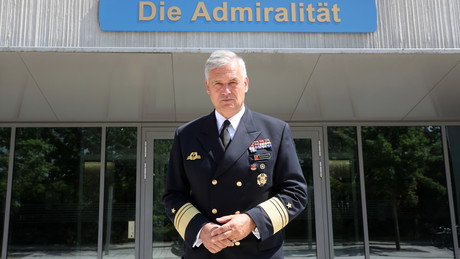 The Inspector of the German Navy, Vice Admiral Kay-Achim Schönbach, was unusually pragmatic in assessing Russia’s intentions and the prospects for Western cooperation with Moscow. He reaped malice and criticism from the German mainstream.

A good part of the German-speaking media and political Twitter and Facebook community is raging and furious: The head of the German Navy has allowed himself an opinion on Russia, and this is not the one that the propagandists of the German mainstream wanted to drum into him.

Vice Admiral Kay-Achim Schönbach, Inspector of the German Navy, is currently on an official visit to India. In addition to a meeting with his Indian counterpart, part of the program was a discussion with representatives of a well-known geopolitically oriented Indian think tank. The Video of the one and a half hour talk is public. It was a profound conversation in which the Indian security experts expressed their concerns about the propaganda and military escalation against Russia.

They were not the only ones who were amazed that the German admiral generally agreed with them. Because his statement, which was in good English, does not fit the official propaganda line in the German media and offices at all, we are repeating it in large parts:

“What do I think Russia really wants? Is Russia really interested in having this small strip of Ukrainian soil? Such a big country? No, that’s bullshit. I think Putin is probably putting pressure on us because he’s doing this He knows we’re divided. He’s dividing the European Union. But what he really wants is respect. He wants a relationship of equals, he wants respect. And my God, giving some respect doesn’t cost much, even nothing at all.

So when I’m asked, I say it’s easy to give him the respect he demands – and probably deserves. Russia is an old country, Russia is an important country. We too, India and Germany, need Russia. Because we need Russia against China. I got it from your perspective.”

According to Schönbach, a good relationship with Russia is essential for the West and India, which share a strategic opposition to China:

“China needs Russia’s resources. And they are willing to give them because sometimes our sanctions go in the wrong direction.”

The officer also commented on the question of the prospects of the Crimean Peninsula, which administratively belonged to Ukraine between 1954 and 2014:

“The Crimean peninsula is gone, it will never be again [zur Ukraine] return, that’s a fact. And we have to learn that politics is a matter of facts, not emotions.”

Always exciting, what a pragmatic view, in contrast to politics and the media, #Armed forces– Generals up #Russia have: Yesterday Kay-Achim Schönbach, head of the ??Navy spoke with us??#think tank. Statements:1. Russia deserves respect 2. We need ?? against ??3. Crimea is??. pic.twitter.com/SkKKtfB6Dc

Around midnight, a shitstorm started on social media about this. Ralph Fücks, husband of the former Green MP and agitator in the Ukraine crisis Marieluise Beck, who was particularly committed to anti-Russian rhetoric, was one of the first to tweet sarcastically:

Matthieu von Rohr, who writes for Der Spiegel, was no less disgusted:

“The German Vice-Admiral Kay-Achim Schönbach (Inspector of the Navy) travels to Delhi – and there on the record he presents strange private theories about world politics. At a loss for words.”

The Indian press commented on the admiral’s words in a friendly to neutral manner. The Hindustan Times headlined:

In its policy, India itself is concerned with balance and friendly relations with Russia. On the other hand, the relationship with China is still shaped by the long-running conflict over demarcations in remote mountainous regions. After all, both countries work together within the framework of the BRICS.

The 56-year-old Schönbach has been inspector of the German Navy since March 24, 2021. Previously, he had served as a staff officer and consultant at the Federal Ministry of Defense and was Flotilla Admiral from 2016 to 2021. He commanded a joint NATO maritime task force in the Mediterranean.