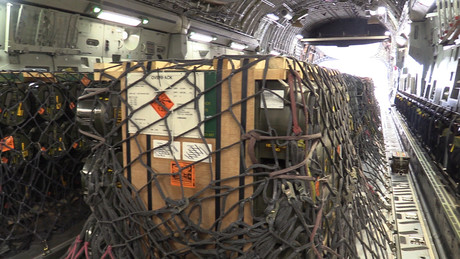 More and more signs of Ukrainian war preparations are being reported from the east of the country: the military spokesman for the People’s Republic of Donetsk has complained about the massive transfer of weapon systems and the preparation of acts of sabotage by the Ukrainian troops.

According to the Donetsk People’s Republic (DPR), the Ukrainian security forces have transferred deadly weapons to the Donbass in recent days, including anti-tank systems from the United Kingdom.

According to Eduard Bassurin, deputy chief of the DPR People’s Militia, over the past few days alone, nine C-17 planes from the UK have shipped more than 460 tons of various deadly weapons, including around 2,000 NLAW anti-tank grenade launchers, to Ukraine . The units of the Ukrainian Armed Forces stationed on the line of contact are now being equipped with these grenade launchers. The DPR People’s Militia has reliable information on this matter, reports TASS.

According to the representatives of the People’s Republic, the transfer of deadly weapons and battalions complete with radical nationalists to the Donbass confirms fears that Kiev is preparing for active hostilities.

“The command of the DPR People’s Militia has registered the preparations of units of the Ukrainian Armed Forces to unleash active combat operations in Donbass,”

says the text of a press release distributed by the authorities of the Donetsk People’s Republic.

According to the DPR Ministry of Defense, six Smerch multiple rocket launchers and two Uragan multiple rocket launchers with cluster munitions were unloaded at the Krasnoarmeysk railway station (the Ukrainian authorities call this settlement Pokrovskoye). Bassurin also noted that in the past two weeks units of the nationalist Right Sector and snipers of the 74th reconnaissance battalion and the Alfa special forces unit of the Ukrainian security service have arrived in the Ukrainian security operations zone in Donbass.

Bassurin called on the West to stop arms sales to Ukraine immediately and to urge Ukraine to fulfill the Minsk peace accords.

Earlier, Bassurin said that according to intelligence, Ukrainian troops are planning acts of sabotage of vital infrastructure in the cities of Donetsk, Gorlovka, Yasinovataya and Dokuchayevsk. TASS quotes him as saying:

“We have received reliable information that the command of the Armed Forces of Ukraine is preparing acts of sabotage on the territory of the Donetsk and Lugansk People’s Republics near the line of contact. The commander of the AFU special forces Major General Grigori Galagan gave instructions to the 8th Special Operations Regiment to to prepare and carry out acts of sabotage.”

The Kiev army is also planning explosions at industrial facilities with dangerous chemical production facilities, Bassurin added. The guarding of such objects was therefore increased.

The Russian Foreign Ministry confirmed the information that for several days Britain has been delivering weapons – about 460 tons – to Ukraine with its military transport planes. this said the spokeswoman for the Ministry of Foreign Affairs Maria Zakharova at a briefing on January 20.

Also on January 20, at a meeting of the OSCE Permanent Council in Vienna, the Permanent Representative of Russia to the OSCE Alexander Lukashevich stated that Russia is concerned about the transfer of arms and military personnel to Ukraine by NATO countries:

“We are concerned by reports that some NATO member countries have stepped up the deployment of lethal weapons and military personnel to Ukraine. Several British military planes carrying guided missile systems have landed in Kiev this week alone.”

Transfer of Ukrainian air defense systems to the Belarusian border:

The Russian diplomat pointed out that US military transport and reconnaissance planes have been appearing in the skies over Ukraine with increasing frequency, and that the United States has lifted obstacles to the transfer of its missile systems and other weapons from the Baltic countries to Ukraine.

“We are also concerned by reports that a Canadian special forces unit has been flown to Ukraine and preparations are being made to send more weapons. What will they do there? When will they appear on the line of operations?” Lukashevich said.

Meanwhile, British Defense Secretary Ben Wallace earlier this week dismissed hopes that London would send its forces to Ukraine in the event of a possible conflict with Russia. “I’ll be honest – Russia has the largest armed forces in Europe, and Ukraine is not a member of NATO,” said the minister. However, he added that the UK, together with its allies, will always do everything possible to ensure Ukraine’s security.

More on the subject – “Danger” from Volgograd: According to the current scenario, Russia is threatening Ukraine from a distance of 400 km