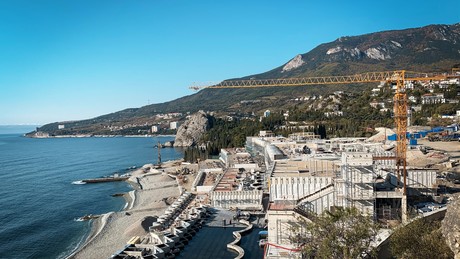 Ukrainian President Vladimir Zelenskiy has issued further sanctions against foreign individuals and companies. Russian citizens and companies are primarily affected. However, the list also includes Austrian architects from an office in Vienna.

On Friday, Ukrainian President Vladimir Zelenskiy signed a decree imposing sanctions on foreign citizens and companies. Thus, he implemented the decision of the National Security and Defense Council of December 30th. The body of the document would posted on the President’s Office website.

The sanctions list includes more than 20 mostly Russian companies active in various fields: from insurance to construction to art and culture. The people concerned are mainly civil servants and judges from the Black Sea peninsula of Crimea.

The Austrian architecture firm Coop Himmelb(l)au based in Vienna and its six representatives are also subject to punitive measures: Harald Krieger, Alexander Ott, Wolf Dieter Prix, Markus Prossnigg, Benjamin Schmidt and Karolin Schmidbaur. According to media reports, the decision is related to a planned museum and theater complex in the Crimean city of Sevastopol. The sanctions are initially valid for five years and provide, among other things, for the assets and assets of those affected to be frozen in Ukraine – if they exist there. Architects are also banned from entering Ukraine.

Like the Austrian newspaper Kurier writes, the public prosecutor’s office in Vienna has repeatedly confirmed that Coop Himmelb(l)au’s activities in Crimea have not violated EU sanctions provisions and Austrian criminal law. The prosecution examined Wolf Dieter Prix’ Sevastopol project in 2019 and 2020/2021. In the absence of an initial suspicion, no investigation was initiated in each case.

In December 2020, the architect told the Austrian news agency APA in view of the sanctions threatened by the Ukrainian foreign ministry that he had no plans to go to Chernobyl on vacation. He would also rather build an opera than a nuclear power plant or barracks.