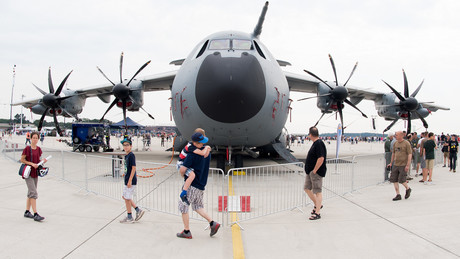 The Bundeswehr would like to support the federal government’s current vaccination campaign and is inviting “aviation enthusiasts from the age of five” to be vaccinated against COVID-19 in an Air Force Airbus A400M. It is not possible to inspect the aircraft outside of the vaccination.

The Ministry of Defense and the German Armed Forces are jointly promoting active support for the federal government’s current vaccination campaign. In a joint action and cooperation between Kassel Airport, medical reserve officers, the Johanniter Regionalverband Kurhessen and the Lufttransportgeschwader 62 from Wunstorf, “aviation enthusiasts from the age of 5” are invited to meet at Kassel Airport in a joint campaign and via corresponding information campaigns on social media Air Force Airbus A400M vaccinated against COVID-19.

On the website of the Bundeswehr you will find further information on the background and ambitions of this vaccination campaign by the Bundeswehr. Lieutenant General Ingo Gerhartz, Inspector of the Air Force, is quoted as saying:

“I am delighted to be able to present one of our A400Ms to the aviation-enthusiastic public in Hesse in this great campaign and I wish everyone involved every success. Every vaccination counts and we, as part of society, are happy to make our contribution here.”

More detailed information on the framework conditions and the procedure for potentially interested citizens states that “first, second and booster vaccinations” can only be given with prior registration:

“The vaccinations of 5 to 11-year-olds are carried out on site by a pediatrician. On January 29, all visitors to the airport premises are asked to wear weatherproof clothing and suitable mouth and nose protection (FFP2 masks are recommended). To everyone A minimum distance of 1.5 meters to other people must be maintained at all times. It is not possible to inspect the aircraft outside of the vaccination.”

Furthermore, the Bundeswehr website provides information about the previous support in the past two years in relation to the events of the Corona crisis:

“The Air Force has been providing support since the beginning of the pandemic. After picking up German citizens from Wuhan in January 2020, their subsequent accommodation in Germersheim in Rhineland-Palatinate, during the transport of patients requiring intensive care from Italy and France to Germany, as part of administrative assistance and most recently with the inner-German Patient transports of “Operation Kleeblatt” fulfilled various orders in the fight against the pandemic.”

Social media users have criticized the cost of such an action, prompting an immediate reply of the Bundeswehr: “The flight takes place within the framework of the regular education and training program of the LTG 62. Kassel Airport does not charge any airport fees.” Major General Carsten Breuer, Head of the Corona Crisis Management Team in the Federal Chancellery, is also taking part in the current vaccination discussion via his social media team:

The daily News informed on January 15, 2022 on the situation of members of the Bundeswehr in relation to a vaccination requirement imposed by their employer. The article explains that paragraph 17a of the Soldiers’ Act regulates “that the soldier must do everything in his power to maintain his health”, which means that he must also “accept certain medical measures against his will if they are related to contraception or to combat communicable diseases”.

According to Tagesschau, Lieutenant Colonel Matthias Frank, spokesman for the Bundeswehr Medical Service Command, is quoted as saying: “The armed forces are built on orders and obedience, on functioning structures. And in that respect it’s an order for every soldier and he has to follow this order progeny.”

Anyone who defies this order must expect disciplinary measures, the lieutenant colonel continued in the Tagesschau article. These would range from reprimands to fines to removal from service. In addition, if necessary, a disciplinary arrest could be imposed to “move the soldier to think about vaccination”. Unlike civil society, the Bundeswehr has these paths, according to Lieutenant Colonel Matthias Frank, spokesman for the Bundeswehr Medical Service Command.

More on the subject – With a green blessing? Bundeswehr mission over Syria ends and will be extended in Iraq