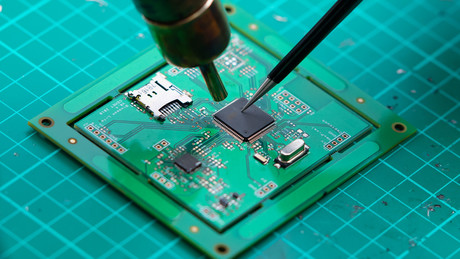 According to a report, the US authorities have warned domestic chip manufacturers of possible import restrictions on their products to Russia. In the event of a military invasion of Ukraine by Moscow, Washington could impose a complete export ban.

According to a letter from the US Semiconductor Industry Association (SIA) to the Reuters news agency Template, US National Security Council (NSC) officials Peter Harrell and Tarun Chhabra reportedly notified SIA officials in a phone call last Friday that the industry was preparing for “unprecedented action” against Russia should the Ukraine conflict escalate should.

In it, the panel made it clear that the White House was considering all options, including a possible export ban on semiconductor production, aimed at severely affecting the Russian economy. Chipmakers should also ensure that their IT systems are well protected, the document also said, summarizing key points from the SIA leadership call.

White House spokeswoman Jen Psaki, while not officially confirming the call, did reiterate that the US and its allies are considering a range of restrictive measures against Russia should it invade Ukraine.

Earlier, US media reported that the US government is considering a ban on electronics imports as one of the sanctions measures against Russia if it invades Ukraine. The restrictions could affect not only products made in the US, but also those made in other countries using US technology. Jimmy Goodrich, the SIA’s public affairs spokesman, warned that such an export ban could have a serious impact on global supply chains.

Other steps under discussion include restrictive measures against Russian banks, personal sanctions against top Russian politicians and Russia’s exclusion from the international banking payment system SWIFT.