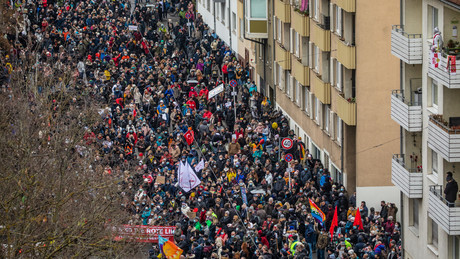 Once again, many thousands of people in Germany demonstrated against the state corona measures and the planned compulsory vaccination. In Stuttgart, the anger of the demonstrators was also directed against the Südwestrundfunk – much to the annoyance of the DJV.

Thousands of people in Germany took to the streets again on Saturday to protest against the state corona measures and the planned compulsory vaccination. In many places they met counter-demonstrators. It remained largely peaceful.

In Erfurt, the police used pepper spray to prevent a protest march against the corona policy from marching towards the state parliament, as the situation center announced. In Stuttgart, demonstrators protested in front of the Südwestrundfunk (SWR) building against media reporting on the corona pandemic.

In Düsseldorf, according to police estimates, more than 7,500 opponents of the corona policy moved through the city center on Saturday, according to the police in Freiburg there were around 5,500 who met around 2,000 counter-demonstrators. Critics of the corona measures also took to the streets elsewhere, for example in Hamburg, Schwerin, Offenbach, Chemnitz, Leipzig, Dresden, Regensburg and Ansbach. In front of the SWR building in Stuttgart, demonstrators repeatedly shouted “lying press” or “We are the people,” as an eyewitness reported. The police asked participants to wear masks.

The German Association of Journalists (DJV) accused the demonstrators of not having understood the principle of freedom of the press. Anyone who calls the “lying press” and claims that the SWR and other media are reporting what they are told “from above” is wrong, said the Baden-Württemberg DJV state association on Saturday. DJV state chairman Markus Pfalzgraf said:

“At the same time, it is absurd to demand that the media should report as they wish. That reveals little understanding of how independent media work and function.”

According to the Green politician Omid Nouripour, part of the corona protest scene could be “win back” with talks and persuasion. Nouripour, who is applying for the Green party presidency together with Ricarda Lang, told the dpa news agency:

“There is a hard, sometimes militant core that I have no sympathy for, but I have empathy for many who are unsure about it.”

He had visited people who were against the Covid 19 vaccinations and also had such people in his circle of acquaintances. In personal conversations, he notes “that their individual experiences have shaken confidence in the institutions.” The “hard core of the corona deniers” should be judged differently. Some of these are people from the right-wing milieu who fundamentally question the free-democratic basic order: “I’m afraid they’ve lost all hops and malt.”

Lower Saxony’s Justice Minister Barbara Havliza (CDU) told the dpa in Hanover: “Many of the participants are ultimately against everything the state tells them to do, and they turn against it.” During the demonstrations she observed “a questionable form of disenchantment with democracy and the state”.