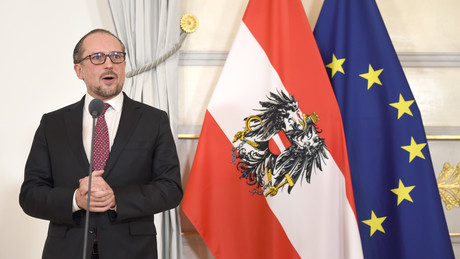 Against the background of the acute tensions between the West and Russia, Austria’s chief diplomat, Alexander Schallenberg, warns the government in Moscow against quick and severe sanctions by the EU. At the same time, he wants to make an exception for the gas sector.

In an interview for the press, Austrian Foreign Minister and former Chancellor Alexander Schallenberg expressed the opinion that EU sanctions should not be imposed on Russian natural gas supplies in the event of an escalation of the Ukraine crisis. The Baltic Sea pipeline Nord Stream 2 should also be excluded. The chief diplomat pointed told the Austrian newspaper that Nord Stream 2 is not yet operational. Therefore, no threatening backdrop can be built with the pipeline.

“In Europe, we depend to a certain extent on energy from Russia. We won’t be able to change that overnight if we want heat and electricity.”

However, the minister emphasized that in the event of a Russian invasion of Ukraine, extensive economic and financial sanctions by the EU are being worked on intensively.

“There will be a very clear, unequivocal and rapid response in the event of an escalation.”

Schallenberg did not rule out Russia’s exclusion from the Swift bank payment system.

For months, the United States and NATO have accused Russia of planning an attack on Ukraine. Russia denies this every day. For its part, Moscow is demanding written guarantees from Washington and the western military alliance that NATO will no longer expand eastwards. Austria traditionally strives for good relations with Russia. Energy also plays a role here: the Austrian oil and gas company OMV is one of the investors in the Nord Stream 2 project. There is also an important natural gas hub near Vienna, which distributes Russian gas to European countries.

The Nord Stream 2 project provides two parallel gas pipelines, each 1,230 kilometers long, for gas transport from Russia through Finnish, Swedish, Danish and German waters of the Baltic Sea to Germany. The pipeline can transport around 55 billion cubic meters of natural gas annually. The double strand has been ready since September 2021, but still has to be certified and has therefore not yet started operation.