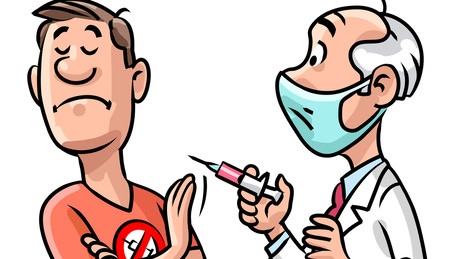 On Wednesday, January 26th, the first orientation debate on the intended introduction of general corona vaccination in the Federal Republic of Germany will take place in the German Bundestag in Berlin. Several supporters and opponents of this project presented their positions and main arguments in the press over the weekend.

In the Bild am Sonntag (BamS), one of the initiators and co-authors of the most far-reaching draft law, the emergency doctor and member of the Bundestag Janosch Dahmen (Bündnis 90/Die Grünen), presented the key points for planning compulsory vaccination. It should be for all citizens from one Age 18 apply, come into force in July or August and, if necessary, be enforced with fines. Dahmen can imagine the amount of the fines in euros in the “middle three-digit range”. In order to prevent “people simply buying their freedom”, “fines should be repeatedly imposed over the months against particularly unreasonable people”. However, Dahmen wants to rule out prison sentences or compulsory detention:

“Nobody should go to jail for not being vaccinated.”

According to BamS, citizens should be obliged to have three vaccinations:

“The law should (…) oblige three vaccinations. I would medically recommend all further booster vaccinations, but not make them mandatory.”

According to Dahmen, you will be able to choose a vaccine from the “approved and recommended” vaccines. Exceptions that would exempt from the obligation to vaccinate have not yet been determined, but general certificates should not be recognized, he says.

The initiators envisage enforcement in such a way that regulatory authorities carry out checks wherever “a lot of people come together, for example at concerts”. In addition, employers should be made responsible “for example in the case of new hires”.

Also in the BamS, the Deputy Federal Chairman of the FDP and Bundestag Vice President Wolfgang Kubicki presented his arguments against compulsory vaccination. He himself had been vaccinated three times and was planning to be vaccinated a fourth time, but he did not consider compulsory vaccination to be expedient: the opponents of vaccination would certainly don’t let her impress you. Kubicki literally:

“Many would rather accept a fine than get vaccinated. And if they don’t pay it, the district courts will have to deal with the processing of decisions and objections for several years. (…) A state that cannot implement what he orders is ridiculous.”

In addition, it is constitutionally “strange” to justify restrictions on fundamental rights with a mutant of the virus that is not yet known, and with a vaccine that has not yet been developed, adds Kubicki.

In the 154th edition of the podcast Die Wochentester, the Halle virologist Alexander Kekulé cited more medically and epidemiologically oriented reasons against compulsory vaccination. He continues to strongly oppose their introduction:

“I was already against the general obligation to vaccinate with the delta variant (…) because it was not epidemiologically necessary. With the omicron variant, it is even less (appropriate),” emphasizes the researcher.

Karl Lauterbach also has no “direct line to the virus god” and does not know which virus variant will dominate in the coming autumn, the virologist commented on the Federal Minister of Health’s statements on the alleged need for compulsory vaccination. There is a high probability that the next autumn wave will be determined by Omikron or by a virus variant that “is a bit better – from a virological point of view”. That means, explains and sums up Alexander Kekulé, that an infection with Omikron that has already been overcome will protect “more or less” in the fall, but not the current vaccines, which – according to the virologist literally – “are hardly effective even with Omikron”.

Even a vaccine that protects effectively against omicron will not be available before September or October 2022, and Kekulé predicts that a vaccine tailored to the next, currently unknown variant will certainly not be available in time. Therefore, one must rely on the “infestation” by Omikron, even if it will demand a price. This is the only way the population can be protected from the deadly effects of future variants. COVID-19 will then be “another infectious disease” among many, but without pandemic effects, the virologist said hopefully.

The omicron variant is much more contagious, especially those who have been vaccinated and those who have recovered are “excellently” infected, explained Kekulé. However, you don’t have to worry as much about it, even if it didn’t mean that “everything was fine”. However, because of the large number of “light and very light courses at Omikron” one should not overdo the countermeasures, he said.

Care facilities before the collapse – due to staff shortages

Meanwhile, Caritas-Altenhilfe, which operates 72 senior citizens’ facilities in three federal states, called for the suspension of compulsory vaccination, which the Bundestag had already decided in December for the nursing professions. The world on Sunday said a spokeswoman of the non-profit company:

Although 90 percent of the nursing staff in the company have already been vaccinated, there is no personnel buffer. If the non-vaccinated ten percent can no longer be used from March, it will no longer be possible to compensate for this.

Also the world on Sunday said Bernd Meurer, President of the Federal Association of Private Providers of Social Services, that the accelerating shortage of nursing staff is jeopardizing care in many places. The most important reason for the bottleneck is the current corona disease and quarantine wave. Meurer explained that the load limits had been reached and further staff shortages could no longer be coped with. In addition, there are fears that employees could then give up this job completely because of the vaccination requirement that will apply in the healthcare sector from March.

Some nursing homes have already imposed admission freezes, which is now also threatening across the board.

More on the subject – Lafontaine on the mandatory vaccination debate: “People notice that something is wrong”