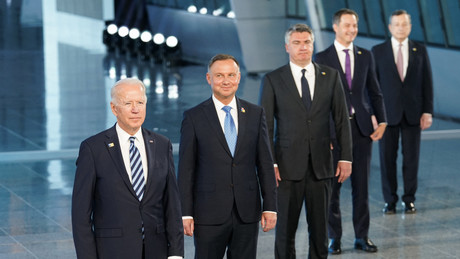 As an ally of Washington, Poland is now taking geopolitical detours within Europe. Head of state Andrzej Duda would like to attend the opening ceremony of the Winter Olympics in Beijing. Did that leave a bitter aftertaste in Washington?

In politics, public gestures are half the battle, for better or for worse. The People’s Republic of China has long been considered the USA’s biggest hegemonic and economic competitor. Especially after the “Pivot to Asia” (2009-2017) could not assert itself.

It has been known since 2015 that China will host the 2022 Winter Olympics.

On December 6, 2021, US President Joe Biden announced that he would not be sending any official representatives to the Winter Games in Beijing. The rest of Five Eyes-Members, i.e. the United Kingdom, Canada, Australia and New Zealand, had understood the decision of the White House. However, all five countries had allowed their athletes to participate in the sporting event. A little later, the United States applied for 18 visas for their officials who are supposed to be in China for “security support operations” during the Winter Games.

The justifications for the diplomatic boycott referred to alleged human rights violations by Beijing, which were too great to justify taking part in the form of a diplomatic delegation. Both the Chinese policy towards the ethnic minority of the Uyghurs in the Chinese autonomous province of Xinjiang and the cause of the independence question of Taiwan were mentioned as examples.

However, this week Poland’s leadership surprised the public by announcing that the head of state Andrzej Duda will come to Beijing for the opening ceremony of the 2022 Winter Olympics. Six weeks after Biden and his Anglo-Saxon colleagues explicitly opted for the exact opposite.

Poland and the United States have had an almost consistently positive relationship since the founding of the United States. After Prussia, Russia and Austria-Hungary failed to avert the final partition of Poland at the end of the 18th century, many Polish military figures embarked on further revolutionary adventures overseas. More precisely, on the North American continent.

The Polish landed gentry and later General Kazimierz Pułaski was one of them. In the United States he is even referred to as “the father of the US Cavalry”. A US holiday is named after him, which is intended to pay homage to his historical contribution to the American Revolution and the founding myth of the USA. Even better known is the military engineer Tadeusz Kościuszko, who also played a prominent role in the American War of Independence.

In view of this common history, many political observers were surprised that the NATO member Warsaw had decided to make the official China visit of the highest category.

But Duda and Biden also have a common history: In 2019, when the US election campaign between Donald Trump and Biden was just beginning to germinate, Duda publicly spoke positively about Trump’s possible re-election, which ultimately did not come about. The Biden government built these insights into its previous foreign policy towards Poland by largely ignoring Duda diplomatically.

In addition, Poland has repeatedly stated publicly and transparently in the past that it values ​​its relationship with China very much. In principle, it is true for Poland that high-ranking visitors at the start of the Olympic Games have become an extremely important tradition. In addition, Duda and his Chinese counterpart Xi Jinping personally have good personal relations, which have had an additional positive effect on the relationship between the two states. A meeting of both is also planned during the visit. Due to urgent questions from Reuters news agency Last Tuesday, the head of the Polish Presidential Office for International Affairs, Jakub Kumoch, explained:

“Poland is a sovereign nation and decides its own policy towards China. (…) Poland is an ally of the United States, but Poland also has very friendly relations with China.”

The debate about the political significance of the Summer Olympics in China was already intense in 2008. Beijing was already considered the culprit in the media for its political strategy towards Tibet and Taiwan. However, these were only approaches that, despite Western pressure, had not been adapted to Western ideas and wishes to this day. Some individual athletes and nations had flirted with a conscientious decision at the time that could result in their possible absence. Ultimately, there were no teams that did not take part in the 2008 Summer Games for political reasons.

Despite all the political explosiveness and all the potential for outrage, it should not be overlooked that the Polish President also has a much more balanced and down-to-earth justification for his visit. According to his subordinate Kumocha, he also wants to personally “support his athletes” with his presence.

The 2022 Winter Olympics will be held from February 4th to 20th, 2022. It is the first time in the history of the modern Olympic Games that a city will have hosted both the Summer and Winter Games.