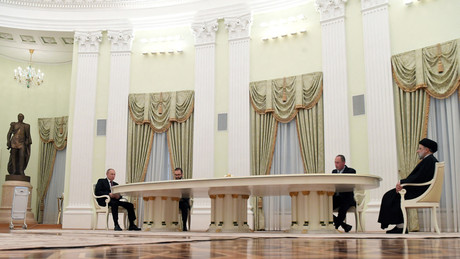 As part of efforts to revive the 2015 nuclear deal with Iran, Russia is said to have been discussing a possible interim deal with Tehran in recent weeks. It is said to have included a limited lifting of sanctions in return for reinstating some restrictions on Tehran’s nuclear program, NBC reported Saturday, citing unnamed US officials.

According to NBC information, the USA is said to have been informed about the draft of an interim agreement proposed by Russia. The Biden administration, meanwhile, is increasingly concerned that time is running out for talks between Iran and international powers to revive the nuclear deal.

Under the draft interim agreement that Russia is said to have submitted to Iran, Tehran would have to stop enriching uranium to a purity level of 60 percent and dispose of its current stockpile at that level, such as by exporting it to Russia. In exchange, the Iranian government would gain access to billions of dollars in oil revenues frozen in foreign bank accounts, including in South Korea. The problem, however, is that any new deal that is decoupled from the nuclear deal (JCPOA) should probably also be approved by the US Congress, according to NBC.

Iran has so far rejected the submitted draft. Iran’s Permanent Mission to the United Nations said Friday that Tehran does not want an interim deal and declined to go into details of the proposed interim deal. Iran is skeptical of the idea of ​​an interim nuclear deal as it would continue to maintain the US sanctions regime against Tehran.

On Friday, Foreign Minister Antony Blinken reportedly urged Russia to use its influence over Iran. “If no agreement is reached in the next few weeks, Iran’s continued nuclear progress will make it impossible to return to the JCPOA, but for now there is still a window, a short one,” Blinken told his counterpart Sergei Lavrov in Geneva. The Russian government did not immediately respond to a request for comment.

Although the Biden administration continues to insist that the full 2015 nuclear deal be restored, National Security Advisor Jake Sullivan is said to have discussed the idea of ​​an interim deal with Iran with his Israeli counterpart to buy more time for nuclear negotiations. The reason for an interim, quick deal, according to US news website Axios, is that Iran’s rapid nuclear advances have brought the country very close to the uranium enrichment levels needed to make a nuclear bomb.

More on the subject – US government plans media attack on Trump: Vienna nuclear talks with Iran before breakthrough