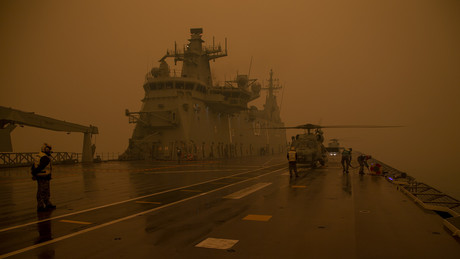 A power outage has paralyzed the Australian Navy’s largest warship. The ship went to Tonga as part of a humanitarian mission. The island state in the South Pacific is suffering from the consequences of a volcanic eruption and tsunami.

The Australian Ministry of Defense has confirmed that the country’s largest warship, HMAS Adelaide, experienced a power outage during a humanitarian voyage. HMAS Adelaide was affected while the ship was delivering humanitarian aid to the Pacific island nation of Tonga. The Ministry of Defence explained on January 31, the arrival of civilian specialists is expected who will “perform an assessment of the affected systems”.

“We would like to thank the technical team for their hard work in hot and difficult conditions, which allows us to complete our task and restore services and communications.”

In this context, questions arose as to the state of the Australian military. Independent Senator Rex Patrick, representing the state of South Australia, said he was “very concerned” about the ship’s reported “total power failure” as military equipment should have redundancy of all systems to remain operational in combat.

The Ministry of Defense, in turn, denied claims that the ship’s emergency power system had also failed. The military said the ship’s essential functions such as the freezers were operational, as were the air conditioning units in most of the ship’s compartments.

HMAS Adelaide is a Spanish-built Canberra-class heliport and the largest ship in the Royal Australian Navy. Earlier this month, the military ship was deployed to Tonga to bring humanitarian aid to Tonga in the wake of the January 14 underwater volcano eruption and tsunami.

The voyage saw an outbreak of COVID-19 on board, with the Department of Defense reporting 23 infections last week. The Tonga government allowed the ship to dock and unload 40 tons of relief supplies on Wednesday, despite concerns about the disease. The permission to dock was subject to the condition that the ship proceeded immediately afterwards.

More on the subject – Bribery with money and prostitution by arms company: US Navy officer pleads guilty