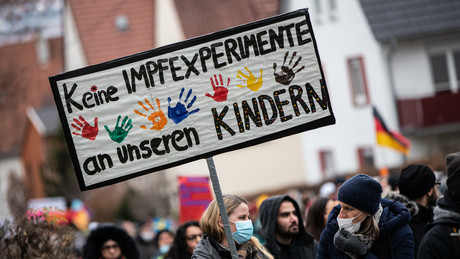 In Corona times, the right to demonstrate is increasingly being targeted by state intervention. A Swabian town now even sees the use of weapons against “walkers” as a last resort. Federal Minister of the Interior Faeser (SPD) and several heads of state departments are setting an aggressive tone in the debate.

State repression and the political tone towards demonstrators protesting against compulsory vaccination and corona measures are intensifying drastically. The Swabian town of Ostfildern is particularly tough. Since Friday, all “non-reported” public meetings “against the regulations of the Corona Ordinance” have been prohibited there under the threat of “use of weapons”, as the world reports. The mayor there Christof Bolay (SPD) tweeted on Friday with reference to a new “general decree“:

“There is no other way: from January 28, unregistered ‘walks’ that go against the applicable Corona rules are prohibited in Ostfildern – no matter what day of the week: general decree.”

Anyone who wants to curtail or even abolish the FUNDAMENTAL RIGHT, which should protect the citizen against state encroachments, cannot be a DEMOCRAT. Only FASCISTS do that. No one can get away with that in court and you know it

The document goes on to say that this approach is “proportionate after weighing up the conflicting interests” and “necessary”. A so-called “shitstorm” followed immediately. A user wrote:

“The mayor’s secret dream of having dissidents shot? I remember it from before…”

He also posted a picture of the GDR flag. “Asocial and anti-democratic!” commented Alexander Hilger, chairman of the Munich district association of the Bavarian party. He addressed Bolay with the question: “Do you no longer notice it yourself? Freedom of assembly?” Another commenter says:

“Anyone who curtails or even wants to abolish the basic right, which should protect the citizen against state attacks, cannot be a democrat. Only fascists do that. Nobody can get away with it in court and you know that.”

The opposition in the Bundestag also criticizes the increasing tightening of assembly rights. Jan Korte, Parliamentary Secretary of the Left, said to the world: “The freedom of assembly and demonstration is an integral part of the democratic constitutional state.” The threat to use weapons in the Swabian city is “simply unconstitutional, completely disproportionate and characterized by an authoritarian understanding of the state. A case for the courts”. And there is also criticism from the AfD. Group leader Alice Weidel says:

“With their course of ‘tough action’ against protests by critics of the Corona measures, the interior ministers are going on a dangerous wrong path that threatens the rule of law and democracy in our country. Blanket bans and threats of violence are a disproportionate and illegal attack on a central right to freedom. “

And the 42-year-old went on to say, with a view to Olaf Scholz and his Swabian party comrades: The scandalous general decree of the SPD mayor of Ostfildern shows where the “constitutional ignitions of a Federal Chancellor who no longer wants to recognize ‘red lines’ can lead”. Before that, the social democrat Nancy Faser expressed herself with similarly drastic words about the “walkers”.

“Decent citizens do not take part in prohibited demonstrations. They also follow police requests and abide by the rules.”

Strobl’s colleague in Bavaria, Joachim Herrmann (CSU), quit according to the BR, a stronger observation of extremist groups. The Bavarian Office for the Protection of the Constitution focuses primarily on right-wing extremists and so-called Reich citizens:

“Corresponding mobilization findings are immediately passed on to the police.”

At the same time, the 65-year-old warned against lumping the protests and their actors together:

“Of course, it is part of the freedom of expression and assembly that opponents of corona measures and critics of compulsory vaccination can demonstrate.”

Because it is also clear that if the demonstrators adhere to the state assembly rules, a liberal democracy has to endure it.

More on the subject – Interior Minister Faeser on Corona demos: “Express your opinion without gathering”